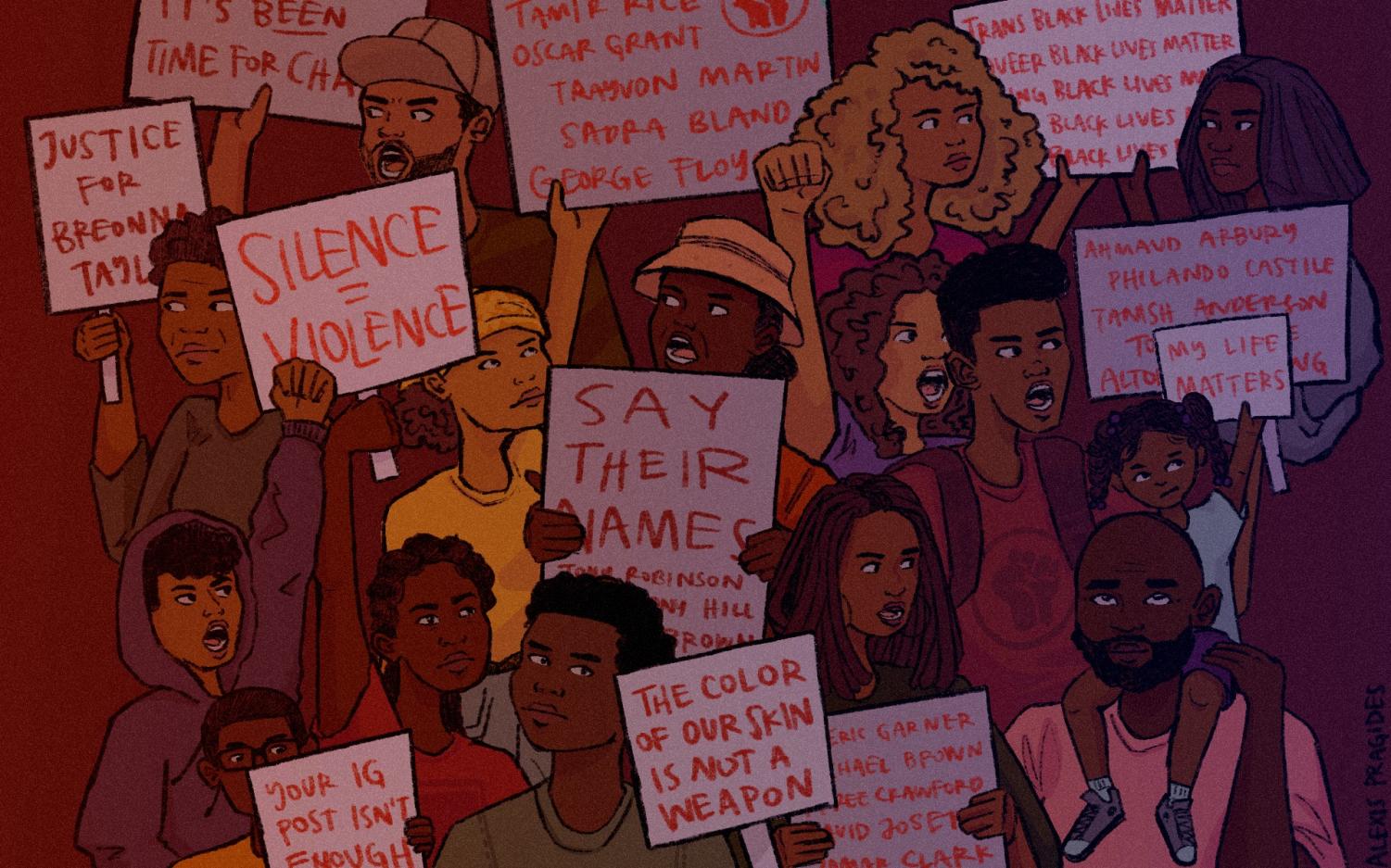 The Black Lives Matter movement has led many protests for justice and equality for Black lives. (Alexis Pragides)

The Black Lives Matter movement has led many protests for justice and equality for Black lives.

The Black Lives Matter movement was founded in 2013 as a response to the lack of justice recieved for the murder of Trayvon Martin, a black youth that was shot and killed by a neighborhood watch member walking home from the grocery store. The movement has been steadily fighting for justice and equality for people of color since its founding, but gained more media attention this summer after the murder of George Floyd. The global organization, composed of both the Black community and its allies, have led many protests, marches and fundraisers to bring justice to Black lives.

Understanding the movement: What is Black Lives Matter?

The phrase “Black Lives Matter” has been constantly repeated this summer: streets, murals, clothing and signs proudly proclaiming this message. Although these words have been heard, seen, and felt these past months many people still do not know what they mean.

BLM is an acronym, representing the Black Lives Matter organization. This movement has always been around but the organization wasn’t founded until 2013 by three women, Alicia Garza, Patrisse Cullors and Opal Tometi.

These women created the project #blacklivesmatter, after the killer of Trayvon Martin was acquitted in 2013. After news of the acquittal garnered attention, many people across the nation called for action.

The BLM movement is very important to many, especially to the people who were affected by these injustices personally. It is also important to the people who are not (especially white Americans) affected, but understand that their privilege exists, taking a stand for the people this does affect. Impactful to all, this movement is a paveway to what many think, an understanding of culture and the struggles black Americans have to go through to simply be themselves.

Unlike the Civil Rights Movement of the 1960s, there isn’t a sole speaker or person to look up to. Instead there are individuals, people who are taking stands to get themselves out there and create protests and rallies to get this message across, to go out in the public and have this movement not forgotten by changing leaves or a new trend.

Senior Zoe Boyd speaks on this, talking about why she protests.

“The principles of the Black Lives Matter movement have been important for a while now but I think there was a time over the summer when it became important to many people including myself so I felt the need to support my friends and everybody in the black community by doing what I could to support them” Boyd says.

BLM has been a strong movement, they have been for years, but after the passing of George Floyd the movement really was brought back into the forefront of public consciousness. This death and the many others of black men, women and children was shown to the public this summer and since then the protests have not stopped.

Messages and information about the movement has been passed around through social media; Instagram, Tik Tok, Snapchat and Twitter are some of the most common apps that had information about what happened and also culture and really taking the time to care about something during a state of panic through the coronavirus and lockdown.
Recently, however, there has been a halt in what people are sharing. Whether it be stories leading to the mainstream media or even the importance of sharing experiences.

Junior Jazmin Brown talks about the struggles she sees with social media now.

“People have stopped posting about [BLM] because they considered it a moment, I know people who have deleted their posts about BLM and everytime it twists my stomach because people really don’t understand the purpose of how much a movement this big could affect a single person. People seem to be ashamed to put these on their feed” Brown says.

With the recent events of George Floyd’s death in the summer, there has been increased controversy internationally on the Black Lives Matter movement and the discussion of racism in the United States. From peaceful protests to riots, the tension between supporters and non-supporters is high and climbing.

Senior Ari Williams feels there’s been a lot of misconceptions about the BLM movement with people associating it with violence in the past several months: “I wish people would understand that the small percentage of violence that has resulted from the looting doesn’t speak for the entire movement. It’s a movement for change and equality, not violence,” WIlliams said.

Senior Nick Schmidt-Bailey agrees to this, “Unfortunately, a lot of my white peers and even my parents tend to associate the movement with violence,” Schmidt-Bailey said.

Dean Sheldon Davis speaks on this as well.

“I have to question what it is people want black folks to do exactly? We try peaceful protests, sit-ins, [and] marches over the years; at some point, people have the mind set that it takes some type of physical action in order to get people’s attention and create change. As far as the violence–I don’t condone it or think it was right, but having participated in a couple protests myself… there are people who infiltrated the protests who didn’t want to really be a part of it, but wanted to see anarchy and destruction,” Davis said.

Not only are there instances of racism in the media, they lie within DGS and the community. Davis and counselor Lavon Robinson share their experiences on microaggressions they’ve experienced in the workplace.

“As far as the school setting, I think sometimes there’s an assumption made that you got your job because there’s some type of quota… that you only got your particular job because of your race or color. For me, when I first got here in 2006 there was a little of that and I was a bit younger and it was more ‘Oh, did he get his job because he’s black?’ [When in reality] I got it because I was qualified and the best candidate for the position,” Davis said.

Robinson continues: “In the workplace I haven’t experienced anything overtly–I have had people make jokes that are insensitive. [Also,] maybe because I’m younger or it’s the color of my skin, but it’s often that people ask me where I’m going, to see my badge, times where I’m coming in the school late at night people will ask me where I’m going. This has been well past my first year of people asking me to see my ID and things like that,” Robinson said.

Williams has experienced similar instances as well, “I’m lucky enough to say I’ve never experienced obvious or intentional racism, but I do frequently have teachers mistake my name for the only other black girl in my class often,” Williams said.

WIth students and staff at DGS having their own experiences of racism comes the demand for solution and equality. On Monday’s, members of the DGS staff watch videos on diversity training, equality and inclusion.

“We talk about different situations to try to train our staff to better interact with each other and students. We try to make sure we educate each other, that’s the only way you’re going to move things forward,” Davis said.

Although DGS provides the books on history and gives training to staff members, Williams feels there needs to be more discussion among students on the harmful effects of racism.

“I feel like a deeper discussion on why the n-word is harmful to anyone who is not black to say is needed greatly at DGS. People have all the means to know why that word is harmful but choose to ignore it. Discussions on it as early as freshman year make these truths harder to ignore,” WIlliams said.

Schmidt-Bailey also feels there needs to be more discussions on topics like racism.

“I feel DGS does an above average job at teaching their students about racism; however, instead of giving students the option to take classes like Multicultural Studies, I feel it should be a requirement to take a class about topics like racism. Too many students leave DGS with prejudices… having a class where we learn from an unbiased source on the importance of social justice should not be an option,” Schmidt-Bailey said.

Robinson feels that a good place for people to start understanding BLM is by having conversations where peers listen to black voices.

“I think sometimes in the Downers Grove community, with its lack of diversity, it’s difficult for people to learn about things they never heard about or things they haven’t seen before, so with the BLM movement people rightfully are quick to have an opinion. But as a black person, I would prefer for people to just listen and try to understand, even though something isn’t your experience, this is the experience for a lot of people in our country,” Robinson said.

Anyone who is harmed by an act of racism or feels they need to have a conversation with someone should contact a trusted adult or the DGS Counseling Services.

Defund the police: Meaning and implications

With the spark of this summer’s protest in honor of George Floyd and the entirety of the Black Lives Matter movement, many Americans were galvanised to think about police reform and ideas such as defunding the police, which has been previously thought of as a radical idea.

Statistics show that most emergency calls are nonviolent threats. This does not mean that these situations don’t have the potential to become violent, instead it means that the police have a higher potential of escalating the likelihood of violence occurring. The equipped skillset of a police officer is commonly out of place for the type of calls that happen in mundane life.

Police training focuses on the worst-case scenario rather than situations that could be handled with a simple conversation.

Senior Abbey Qualtier advocates for defunding the police, and “believes that shifting the money from police departments to social services could improve things like mental health, addiction and homelessness.” An approach like this pushes for the decriminalization and de-stigmatization of people who suffer from mental illnesses and addiction.

Junior Hailey Llyod, another advocate for Defunding the Police, thinks that “pushing stricter policies in police departments would help lower the yearly killings by police.” Such policies would include increasing the amount of cops at a crime scene to ensure rationality and even creating new branches of the police to ensure proper evaluation of crime.

The day-to-day shift of an average police officer can be anything from dealing with potholes to dealing with instances such as George Floyd and Breonna Taylor. Police officers are also increasingly asked to complete paperwork and forms to document their reports; these are valuable because they serve as documentation of an incident and may be important to the case later. The empty report in the killing of Breonna Taylor listing her injuries as “none” highlights the importance of documentation.

In retrospect, it is apparent that metropolises across the country are making steady changes in regards to defunding the police. While the word “defunding” might be deemed radical, it surely gets the media’s attention and is creating change.

Becoming an ally of the Black Lives Matter movement

In this podcast we discuss the different ways in becoming a Black Lives Matter Ally and the opinions of students who are involved in the movement. Interviewees: Madison Wies, Bri Yates, Aamari Taylor, Kenneth White. Audio: “True Messiah” by DJ Freedem