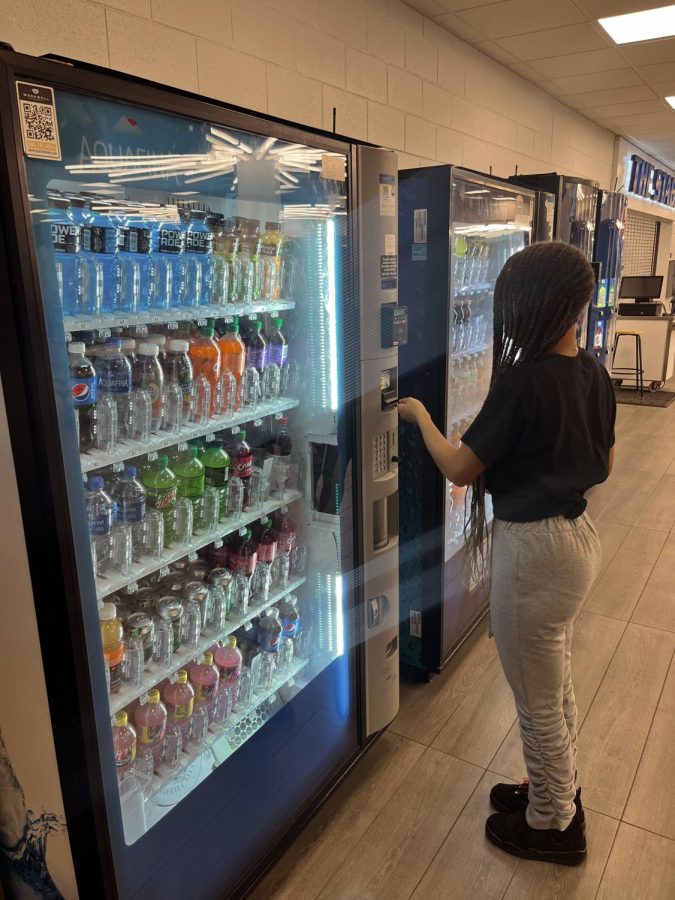 Students buy beverages from the vending machine to fuel their caffeine addiction.

While a daily coffee is part of many high school students’ routine, many studies show that caffeine addiction in teens is a rising issue that is not going away anytime soon. According to the American Academy of Pediatrics, the recommended maximum daily consumption of caffeine for teens is 100 mg.

Senior Mary Ghawaly is one of many high school students who regularly consumes over the recommended amount of caffeine.

“It depends on the day, but if I have time, I’ll usually wake up and have two cups [of coffee] so maybe 200 mg of caffeine, and then I’ll have a cup in the middle of the day. There have been days where I’m just constantly drinking coffee. Last year, I used to do 500 mg, maybe 600,” Ghawaly said.

In addition to just coffee, many teens are drinking energy drinks from brands such as Bang, Rockstar, Red Bull, Monster and Celsius. Energy drinks have seen a rise in popularity despite being linked to cardiovascular complications, insomnia, anxiety and dehydration among other side effects by the Center for Disease Control (CDC). The amount of caffeine in an energy drink can range from 80-250 mg per serving size.

Social studies teacher Derek Hoovel is a self-proclaimed caffeine lover but described how a daily school schedule can exacerbate exhaustion in teens, leading them to rely on caffeine.

“We start school at a time that really isn’t conducive to the teenage physiology because [teens] are geared to stay up late at night and sleep late in the morning, but we don’t allow you to do that, yet you still end up staying up late at night. You’re lacking sleep and [need] a little bit of an artificial boost to get you through some of those morning classes,” Hoovel said.

In addition to exhaustion from school, Hoovel added that coffee companies hook teens at a young age with their marketing and sugary drinks, which keep them coming back.

“Most teenagers aren’t getting the straight black cold brew… they go straight to a lot of the sweeter kinds. That gets them hooked on caffeine early. [It’s] smart marketing when you’re building up a clientele for decades to come,” Hoovel said.