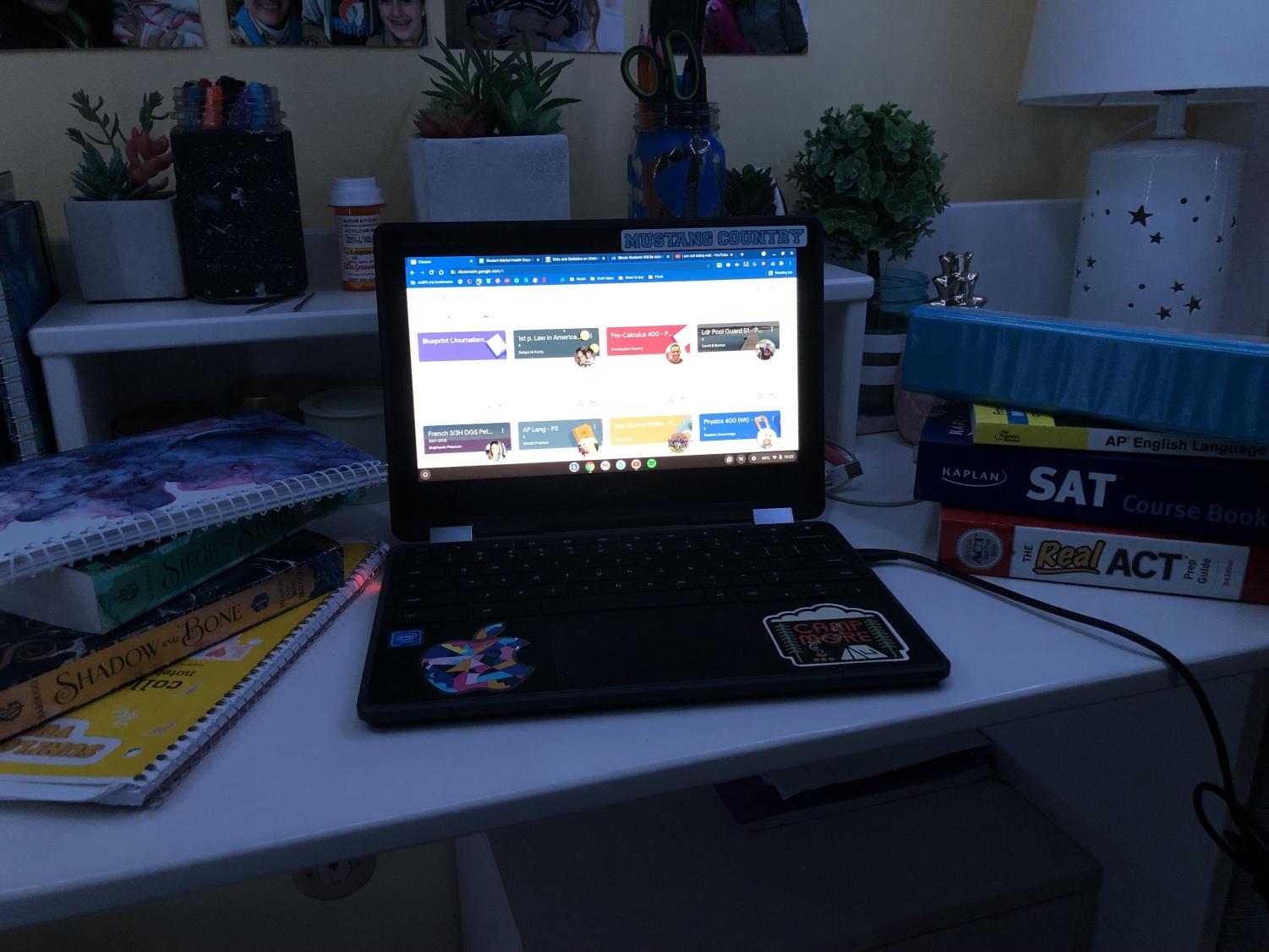 At Downers Grove South, students have six absences where they don’t have to provide a doctor’s note; they can just be called out. Any time a student is absent, they can make up their work,”DGS Counselor Jenny Franz said. (Emma Fudacz)

At Downers Grove South, students have six absences where they don’t have to provide a doctor’s note; they can just be called out. Any time a student is absent, they can make up their work,”DGS Counselor Jenny Franz said.

In August 2021, a bill signed into effect by Governor J.B. Pritzker stated that all Illinois students will be allowed to take up to five mental health days per semester starting in January 2022. Students will be able to make up all missed work without consequences, and will not need a doctor’s note to use these excused absences. According to the Center for Disease Control and Prevention, approximately 4.4 million kids ages 6-17 have been diagnosed with anxiety, and the goal of passing this bill was to help reduce the stress of school for students in Illinois.

Many DGS students were excited to hear this news, but this bill actually isn’t changing any of the curriculum here at DGS. Counselor Jenny Franz explained a little more about how absences work when related to mental health.

“Every school district has different rules or guidelines on how they treat absences. At Downers Grove South, students have six absences where they don’t have to provide a doctor’s note; they can just be called out. Any time a student is absent, they can make up their work,” Franz said.

As Franz stated, a student may make up the work they missed when they were absent, but details how that is not the case at other high schools in Illinois.

“This bill is important, because there are some schools who won’t allow students to make up their work when they miss a day of school if it doesn’t fall within their reason or category [for missing a day],””

Though many students seem to be enthusiastic about being able to take a day off to improve their mental health, other students are worried about the added stress of taking a day off, and the anxiety that make-up work could possibly add.

Junior Megan Fox questioned how effective taking a day off actually would be.

“I feel like people would take that day because it is so stressful, and because the work is too much for them. So then, having to do double work… it would kind of negate the effect,” Fox said.

Despite the mixed feelings about actually taking a mental health day, DGS social studies teacher Robyn Fardy believes that the passing of this bill will promote positive discussion about mental health.

“I mean I hope it opens the doors to more conversations. I think so many times people take days off without saying what it’s for or the purpose of it, not wanting to be transparent about it, or some sort of shame. I hope that, with the blessing of the school and the state, it could open the door for more conversations,” Fardy said.

Fox believes that the stigma around mental health in schools is already starting to be erased, and that most of her friends already feel comfortable sharing how they are feeling with each other.

“I definitely know that there are some things that people will just be uncomfortable sharing no matter what, and that’s totally fine. I find that most of my friends are pretty open about if they are struggling or if they are having good or bad days,” Fox said.

Though students will be the ones taking the mental health days, some believe that it should partially be a decision made by the parents as well so that students don’t abuse the 6 days per semester that are allotted. DGS parent Laura Sumlin shares her perspective on when a student should take a day off.

“I think it’s probably a parent’s responsibility whether you let your child take them or not. If your child really is struggling, then you have the option of having an excused absence,” Sumlin said.

There are many resources for students who are feeling overwhelmed. Some resources that are available to all students are the Counseling and Support center, located directly off the commons, and the Mindful Mustangs club that meets every Wednesday morning at 7:30 a.m. in room A103. Tips on how to manage stress as a student are currently under the Student Support Services tab on the District 99 website.

Additionally, there is another tab on the District 99 website with more mental health resources for DGS students.