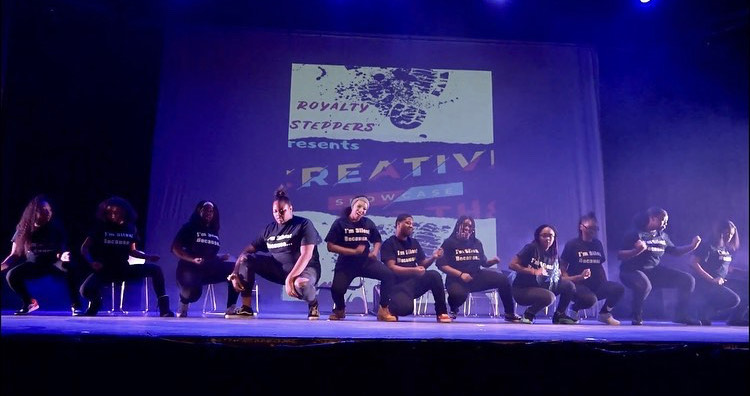 The Royalty steppers pose after finishing one of their showcase routines. (Sirah Uwejeyan)

The Royalty steppers pose after finishing one of their showcase routines.

The ‘Royalty’ of DGS: A look inside the step team

On the cafetorium floor, a handful of students clap in unified rhythm, arms bent at various angles while they quickly move into formation. The steppers team rechoreographs for an upcoming basketball game, just one of the places they get to showcase their routine. For the past 16 years, DGS’s group, the Royalty, has been sharing their talents with the community.

Stepping is a form of percussive dance in which people use their bodies to make noise. According to steppers Coach Alice Freelon, stepping has evolved into a sort of phenomenon over the years.

“It’s essentially dancing with your feet and hands while using precision. It started off in Africa and they’d use it to communicate and motivate themselves. Now, it’s extremely popular and most often found in colleges with fraternities and sororities,” Freelon said.

The Royalty team, composed of about a dozen, all-grade level students, practice year-round for various events. Freelon explains the numerous venues the group is spotted at throughout the school season.

“This team is always working on something and adding to their routine. They’ve done the Black History Month program, talent shows, parades and basketball games so far,” Freelon said.

Though coached by Freelon, the steppers work with one another to think of new formations and rhythms. A leader in their program, senior Rena Campbell, serves as the team’s captain. Her experience guides them on the floor and through the routine.

“I’ve been stepping for four years. My most recent coach picked me to be a captain because she thought I was responsible and had a lot of leadership skills,” Campbell said.

As captain, she does a call and response during their routine, in which members of the steppers follow her example. In the spotlight, she “wants to mentor” those who follow in her footsteps. Being captain has provided Campbell opportunities to understand her teammates better, all while learning more about herself.

“You can’t judge everybody by what they show outside. I’ve built connections with my teammates over the years but getting to know them has taught me to open up,” Campbell said.

You can’t judge everybody by what they show outside. I’ve built connections with my teammates over the years but getting to know them has taught me to open up, ”

As a member for the past four years of high school, she has spent the majority of her time in the stepping program. However, next year she paves the way for someone new.

Sophomore Sirah Uwejeyan will be passed the torch in the upcoming school year, taking over after Campbell graduates. Though she joined the team in the middle of the 2018-2019 season, Uwejeyan is looking forward to leading her peers.

“It’s a mixture of nervous and excitement, but I’m ready to lead a group of people and give my ideas. It’s a great opportunity for me to show who I really can be,” Uwejeyan said.

The position of step captain is an example of “outstanding leadership” in the program. They are in charge of both literally and figuratively guiding the group through the routine. Freelon, who selects the captains, expands on what the role really means and why it is a pivotal part of the team’s success.

“With stepping, teamwork is important. As a captain, you can’t be off beat and you can’t mess up, because everyone will hear you. You have to be in sync at all times,” Freelon said.

Though the Royalty team is traditionally an all-female step group, this year they have a new edition: Junior Noah Jones. Through joining Umoja, DGS’s black excellence club, he met the members of the current team who urged him to join.

“The Royalty steppers inspired me my sophomore year at one of the basketball games and it seemed like so much fun. I was welcomed because they wanted a boy stepper on the team,” Jones said.

Being the only boy in a female-dominated group has its perks. For Jones, it means getting extra solos and having all eyes on him. However, he explains that the lack of male members is something that is unique to the DGS team.

“Other schools have more boy steppers and for us, I’m the only one so I have to step a little differently to represent all of the men. It’s pressure on me,” Jones said.

Since joining the step team this past year, Jones has felt “more confident” and enjoyed the friends he has made. Looking forward to practice, he is excited to work alongside his teammates to perfect their routine. For the upcoming school year, Jones urges more boys to join the step team to take their performances to the next level.

“Stepping is not a girly thing, we have a lot of stiff movements and sweat just as much as the cheerleaders do. I encourage [more boys] to do it because we’ll be able to do more stunts for next year,” Jones said.

With the season coming to a close in a few short months, the Royalty steppers look back on a successful year of showcasing their talents. As seniors like Campbell move out of the program, Freelon reminisces about her students leaving and her experience as their coach.

“I think my favorite part is watching them grow. [They’ve] matured and grown so much, it’s like watching your own child. I’m so proud,” Freelon said.