Decade recap: How DGS has changed throughout the 2010’s 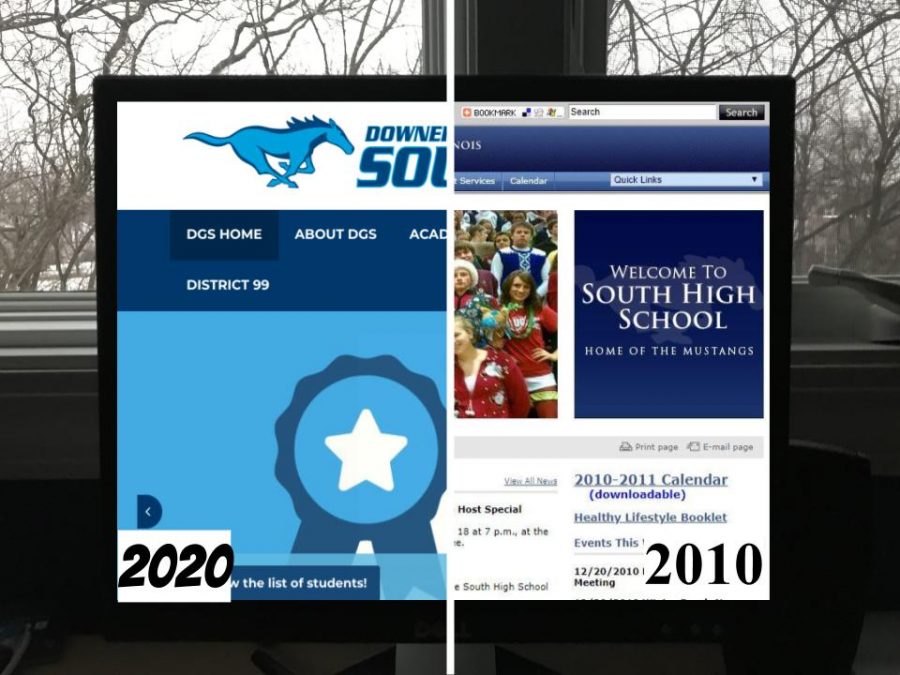 The DGS website is one of many things that have changed over the course of the past decade.

The past decade in the US has been one of great change, with social media becoming a defining force in the lives of most Americans and the polarization of American politics through the presidencies of Barack Obama and Donald Trump.

The past 10 years have been no different for DGS, including everything from a tornado taking out much of the bleachers and fences to a walkout as part of a nationwide movement over gun control. While these momentous events may be memorable, many of the more meaningful changes have taken place over a longer period of time.

One of the biggest changes that has taken place has been the way technology has been integrated into almost every facet of the learning process at DGS. This is a huge change from just 10 years ago, remembers social studies teacher James Chochole.

“The way I remember it there were very few cell phones and the internet was hit or miss. Most of us probably had maybe a projecting screen in class. Getting something like live news in class was just not heard of,” Chochole said.

Now, Chochole, like most of his colleagues, regularly uses the internet in his classes and says that he has a digital feed in his class that gets news downloaded each morning for students to stay in touch with current events. However, he does acknowledge that technology does have its drawbacks and can distract students from their work.

“[Technology is] a negative in that students who already have trouble staying focused. [They] now have an added distractor and I think that is a big negative, and I just spend a lot of my time trying to get people off their phone,” Chochole said.

This frustration was shared by English maternity substitute Kayla Galvez who suggested that different methods may need to be taken to get students off their phones.

“I think the most severe thing I can do is have them put their phone on my desk, so I think just maybe [there should be] stricter phone use just so that they’re getting the best out of the class, and then I’m able to teach them everything I can,” Galvez said.

Another perspective on the downsides of technology comes from Assistant Principal for Counseling and Student Support Services Vince Walsh-Rock who has seen a social shift that he believes is because of the prevalence of handheld technology.

“I see students in the hallway just more disconnected from the experience of high school. What I mean by that is the earbud phenomenon of I’m so tuned into my device as I walk down the hallway, but, I see adults do it too and I think, ‘how can you do that, this is a connecting place,’” Walsh-Rock said.

While technology may have had the effect of isolating students from each other, DGS, according to former student and social studies teacher Sean Liston has become more inclusive of all students. Liston believes that progress is a result of active administrative actions combined with the efforts of students.

“In terms of being inclusive, when I was a student I didn’t quite notice [attempts at inclusivity], it was a different political climate. It was just different, whereas now the school and kids are trying to do a much better job to make people feel welcome,” Liston says.

Liston hopes that this will be something that continues in DGS’s future without sacrificing the school’s current culture.

“I hope the school tries to do more to make every student [included]. It’s tough because I want all students to feel welcome here and safe here and that’s the biggest thing South will continue to work on; at the same time I don’t want to lose its traditions and it’s a really hard place to be at,” Liston said.

Despite there still being room for improvement, DGS has undoubtedly made strides in becoming more inclusive as a whole. Walsh-Rock put in perspective the shift in culture that he has seen over the past 10 years.

“There’s been quite a bit of research on [the adolescent] age group and found [their] age group is by and large the most tolerant and inclusive generation there ever has been and we’ve seen that play out here just in general accepting of differences. I don’t hear, not that bullying doesn’t happen, I know it does, but I don’t hear the volume I did around gender, sexual orientation and ethnicity,” Walsh-Rock said.

This has allowed certain members of the LGBTQ community to feel comfortable enough at DGS to do the same things that many straight couples take for granted.

Inclusivity and diversity have been a message that has been prevalent over the last 10 years as Chochole has said that these themes have shaped his department’s curriculum.

“Our curriculum probably mirrors the dynamic of diversity. In our department we are definitely going towards recognizing minorities, helping kids come to terms with their identity and not just teaching to the norm or thinking that our entire student body is white, but teaching with more of a diversity-focused thrust,” Chochole said.

Meanwhile, DGS has had to respond to two troubling nationwide trends, one of which being school shootings. Walsh-Rock believes that the recent surge in shootings has been some of the most significant events for DGS in the past 10 years.

“Parkland was a big deal, that was significant, and not just Parkland but the rash of school shootings that have shaped what we do here in the building around security. We hired a whole security — that’s a big change,” Walsh-Rock said.

DGS has also had to react to the vaping epidemic as in just four years, from 2014 to 2018, tobacco use doubled among students. This broke the trend of drug use declining as alcohol and marijuana use both declined in the same time period. However, according to Walsh-Rock, a tobacco epidemic at school is not something that DGS is seeing for the first time.

Chochole shared a similar observation about the surge in vaping at DGS.

“I think in general drug use has probably dropped however vaping has gone through the roof. I’ve never seen more people line up to go to a stall than here, so yeah I think vaping which was marketed towards teenagers has had an impact and it’s growing. Now on the other hand, since vaping has been found to be dangerous I think lots of students have reconsidered it,” Chochole said.

Perhaps, more students will continue to change their minds on vaping and decide to quit, however, DGS will have to continue to react to problems like school safety and vaping in order to make the best choices for their students.

Overall though, many of the changes DGS has gone through are viewed as positives by those who have seen these changes occur over the course of a decade with technology giving students access to endless information and the school making strides towards creating an atmosphere accepting of everyone. While nothing is yet known of what the next 10 years will bring, DGS students and faculty can expect to continue to experience huge changes to every aspect of the building.