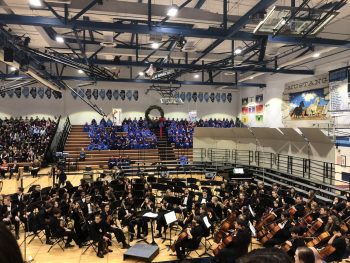 The D99 orchestra and the DGS combined choirs get ready for the start of another holiday assembly. (Jovana Kuzmanovic)

The D99 orchestra and the DGS combined choirs get ready for the start of another holiday assembly.

At the annual holiday concert, DGS students, family and faculty all get to experience the entire DGS music program in one concert. Within the ensembles themselves, the program includes the combined wind symphony and wind ensemble, a combination of the DGS concert orchestra and the District 99 symphonic orchestra and the combined choral program. This is only a piece of the DGS music program as a whole.

Between the band, orchestra and choral programs there are eleven full-year traditional music classes. Add in the four select choral ensembles, three jazz ensembles, marching band, pep band, pit orchestra and rock band to get a total of 22 musical groups in one place.

Behind them stands multiple awards and accolades. The Madrigal Singers will be attending the 2020 All-State Convention and also performing in concert with the Millikin University choirs in January. The Marching Mustangs were grand champions at both Romeoville and the University of Illinois while picking up multiple awards for various categories over the course of their season.

With so many ensembles to choose from, the focus is on the band, choir and orchestra programs that make up more than half of the fine arts department at DGS.

‘You’re never going to be alone if you have music:’ Deanna Eslit 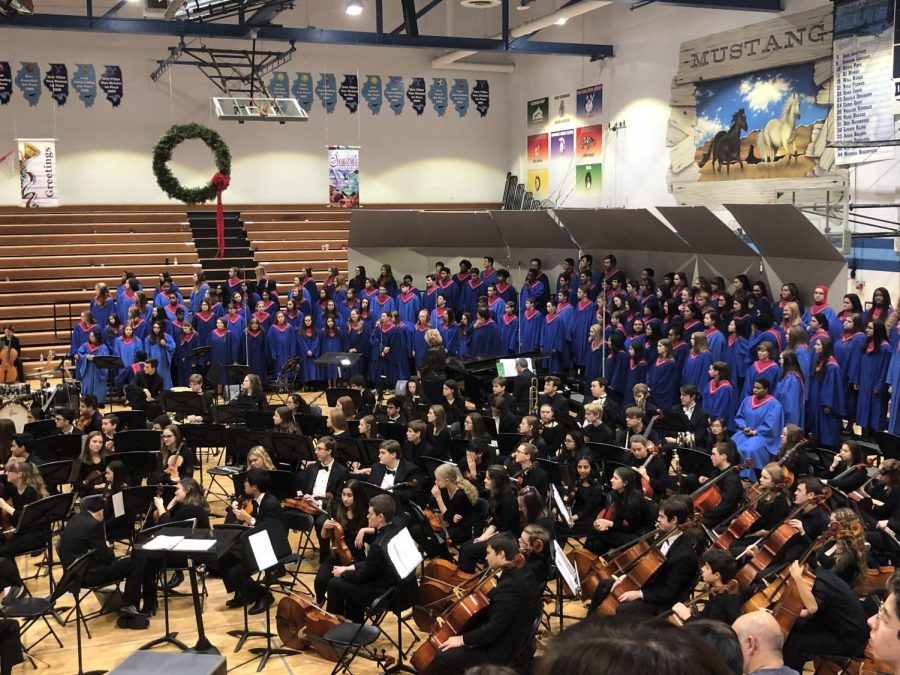 Eslit, far right and third row, is an alto two in the DGS treble choir.

For sophomore Deanna Eslit, enjoying choir was a learning process. Eslit, a member of treble choir and chamber singers, wasn’t always in love with singing. In fact, she hated it at first.

“It all started in fourth grade when we were kind of forced to try out for choir, and I thought it was stupid. But then I actually did it, and I never wanted to stop, and I actually ended up loving it,” Eslit said.

While some students might think taking choir is stupid, like younger Eslit did, others see it as a freedom from regular classroom structure. Choir isn’t held in a standard classroom, rather the room is very open with walls designed to give singers the best sound possible. Eslit elaborates on what makes choir a nice break for her.

“A lot of my friends dropped it, but I think the reason I stayed with it for so long, it’s just such a nice break in my day, and I know a lot of people say that, but whenever I come to choir, it gives me a different feeling. I feel like if I decided to take a different class or study hall, I would be so stressed, but when I come to choir, I know that the people in choir are going to give me a fun time, and I can just let loose and just express myself,” Eslit said.

Along those lines, choir allows students to work in one musical unit rather than separately. Also as a member of the varsity girls basketball team, teamwork is something Eslit values in the choral world as well.
“There’s a lot more teamwork involved, it’s just that I like working with other people and the challenge that comes with that, all the other things you have to take into account things like blend and how can we portray this message that we’re trying to get to the audience together,” Eslit said.

In Eslit’s belief, music isn’t a place to escape, but rather a friend a person can always come back to.

“Music to me, it’s honestly not like an escape, but more like a friend. Because even if you’re not the best at it, you can go anywhere in life and you’re never going to be alone if you have music. It’s just a way to connect with people, reflect, reflect on yourself and where you’re at in life and just be you and have a good time,” Eslit said.

Jericho Gomez strives to become a better performer through the Violin 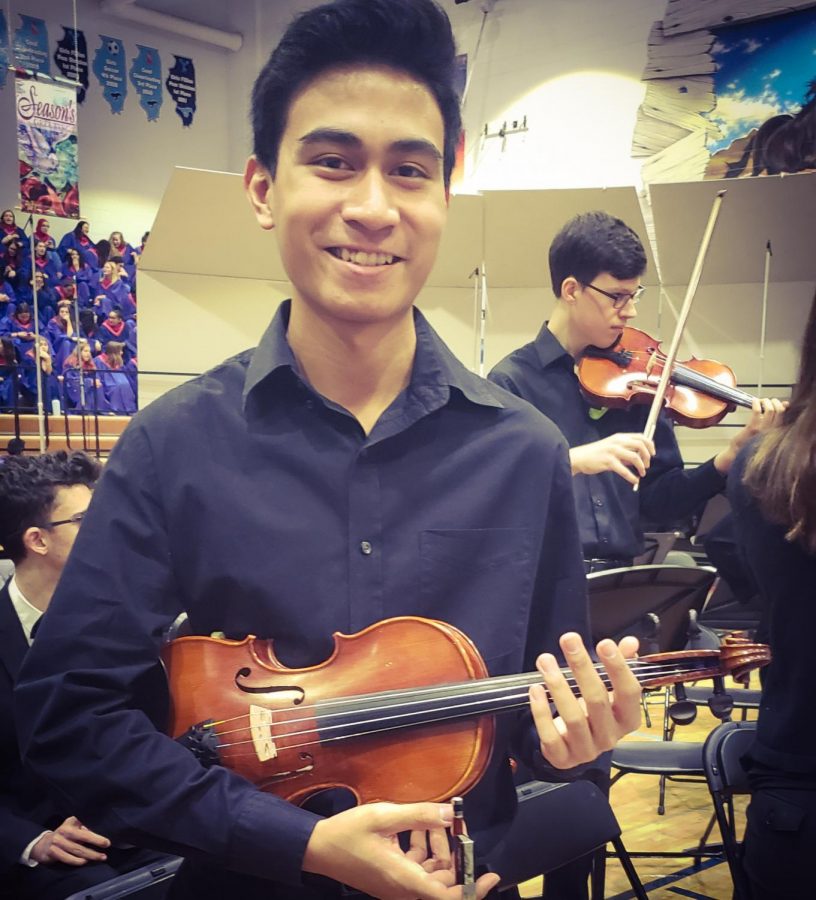 Gomez before he performs at the combined orchestra holiday concert.

With music come many emotions, thoughts and feelings as you practice and or perform throughout your musical journey. Junior Jericho Gomez is familiar with how playing the violin can affect a person.

“I started playing the violin about five years ago, as my parents recommended it to me and it was pretty fun actually,” Gomez said. Choosing to perform with the violin didn’t come as an easy decision. “It was either between that or piano, and I chose the violin,” Gomez said.

As it turns out, Gomez has developed other interests in instruments such as the piano and the guitar. “I tried playing the piano by myself, but that didn’t go well. I’ve wanted to play the guitar, so I’m trying to look more into that,” Gomez said.

Performing on any instrument comes with its benefits and difficulties. Gomez sought out to learn the satisfaction of performing with the violin.

“Playing the violin means you’ll be in orchestras a lot, so it taught me how to manage my time better,” Gomez said. He also elaborated on how it affected him in the long term. “I’ve had weeks where I have been crammed with events, but I still managed my stuff with school.”

Whether anybody in music knows it or not, there will be a story or sense of purpose in why one performs with their chosen instrument. Gomez looked no further away from that.“Music is important to me because it helps me express myself, there had been times when I’d be down and I usually just pick up my Violin and I feel better at the end,” Gomez said. He looks at music in being the simple tool for curing his days.“It’s just a way to let your feelings out.” Gomez hopes to continue his journey with performing music on the guitar. 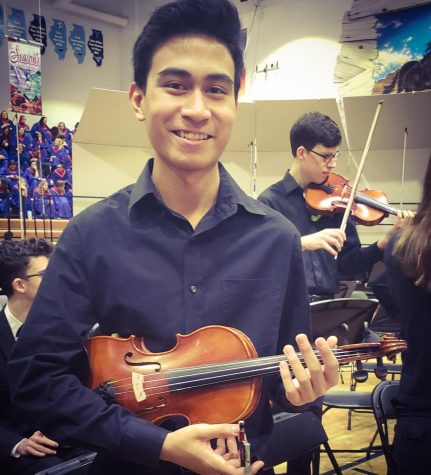 A ‘Reflection’ on the band program, starring Nick Sisson 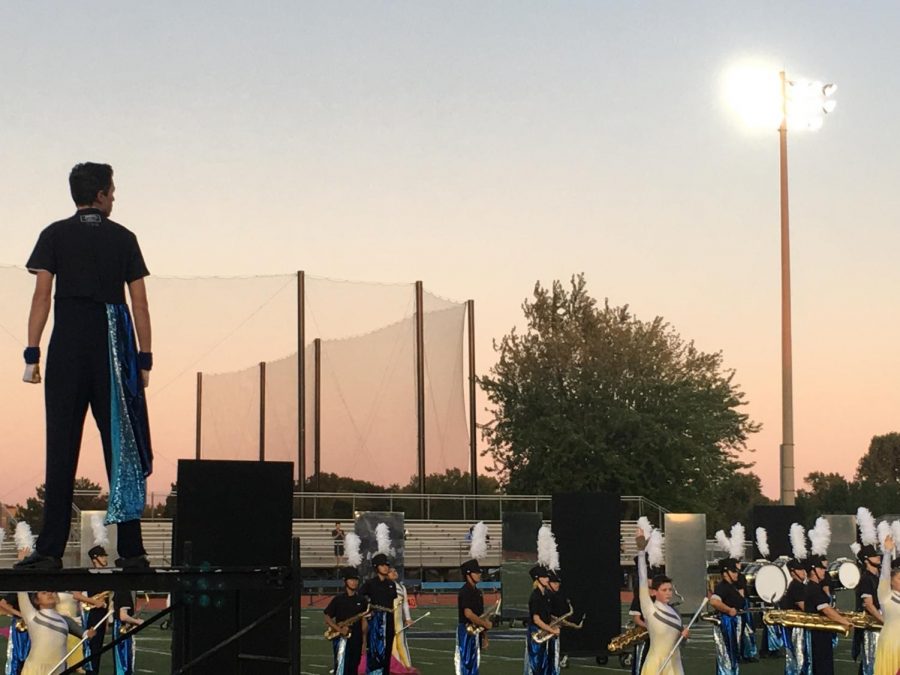 The DGS Marching Mustangs, led by Nick Sisson alongside three other drum majors, performs in exhibition at the blue on blue scrimmage.

On the band side of things, we have junior trombonist and drum major Nick Sisson who’s been in band since elementary school. After a positive experience in middle school band, Sisson made his decision to join the DGS program.

“I first joined the band program because of my middle school teacher Mr. Balika. He made me enjoy band and I decided that it was fun in middle school so it should be fun in high school,” Sisson said.

Alongside the academic concert band classes, band students can also be involved with the competitive marching band and the pep band who performs at select DGS home basketball games. Sisson, a member of both of these organizations, describes the differences between each band.

“The difference I think is in the way we play music. In marching band, it’s a lot like concert band in that you’re trying to tell a story, but marching band has the added challenge of adding a visual to your sound, while concert band is all sound. Pep band is probably the most fun I’ve had at DGS, it’s just a group of people there to play loud and hang out while watching some basketball,” Sisson said.

To add to that, Sisson is one of four drum majors for the marching band. He emphasizes the work drum majors do so bands can win championships at multiple competitions during their short season.

“Being Drum Major has just given a much bigger appreciation to everything that goes on behind the scenes. Like a conductor isn’t just some guy that wildly swings his arms in front of a group of people holding metal and wooden tubes. They have to learn the peace and know everyone’s parts better than they do even if they don’t play that instrument.”

“It’s just incredible and gives me such an amount of respect and awe at all directors I’ve ever seen and will ever have the pleasure of working with,” Sisson said.

For some people, music isn’t just music. Music can be a culmination of love, hard work and pure enjoyment. To Sisson, that’s exactly what music is.

“Music to me is just something that I’ve always loved. I’m the type that after a movie will go home and re-listen to the soundtrack because I liked it so much. Music has always made me feel something and the reason I love playing so much is because I want to make people feel something through the music that I play.”

“ If I can make one person feel as sad, happy, or really just get them to feel anything then I succeeded in what I want to do with music,” Sisson said.