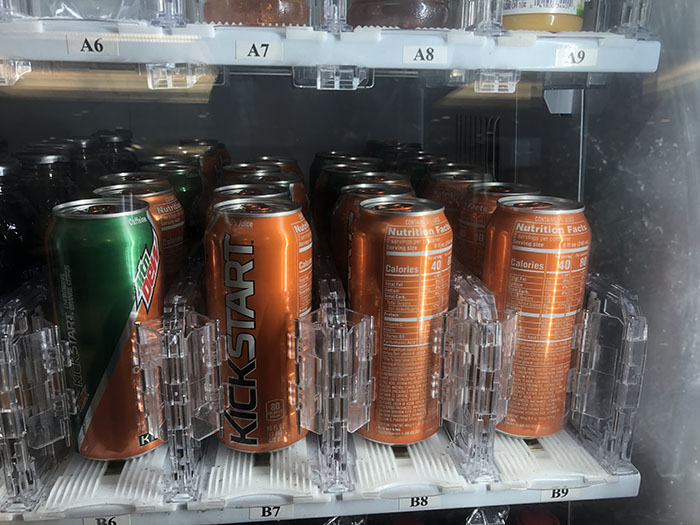 Kickstarts should be ‘kicked out’ of the vending machines

Every day I walk into school, and I notice numerous teens drinking Mountain Dew Kickstart. I, myself, can hardly hold down my breakfast of oatmeal with some berries, let alone a can full of sugar, caffeine and a bunch of chemicals that I either don’t recognize or can hardly pronounce.

DGS is always preaching that teens need to eat healthier, sleep more and take better care of themselves. Selling Mountain Dew Kickstarts in the vending machine is a huge step backwards, and ultimately away from this goal.

According to the Mountain Dew website, there are two servings in one 16-ounce can of Kickstart, but let’s face it — nobody drinks half a can and then says, “I’ll leave the rest for later.”

In that one can, there are 20 grams of sugar, which is equivalent to 5 teaspoons. The American Heart Association states that the recommended amount of sugar a teenager should consume a day should be no more than about 25 grams (give or take depending on age and sex). So you are drinking approximately 80 percent of your daily sugar intake in just one drink. Consuming too much sugar can cause health effects.

These Kickstarts also have 90 mg of caffeine in each can.  An average 16-ounce cup of coffee has 182 mg. Therefore, this “kickstart” isn’t really worth it. Most of your energy is just coming from the sugar.

These Mountain Dew Kickstarts are also influencing poor behavior in teenagers. Many teens don’t get enough sleep. According to the National Sleep Foundation, teens need about eight to ten hours of sleep. One study showed that only 15 percent of teens got eight and a half hours of sleep.

For this reason, when students come to school, they buy this energy drink to replace the sleep that they are lacking. These habits can result in teens who never learn to value sleep or to take care of themselves.They will always rely on energy drinks and caffeine to get them through the day.

Instead of drinking these energy drinks, students should learn that sometimes they have to prioritize themselves before their studies and get some more sleep, or at least find a healthy alternative to revamp their energy such as low-sugar drinks like tea and black coffee or pursue a healthier diet.

DGS purchasing Kickstarts and selling them in its vending machines is only encouraging an unhealthy lifestyle for the student body.

Kickstarts are the perfect start to every teen’s day

Over the past year or so, Mountain Dew Kickstarts have risen to become one of the most popular beverage items for students at DGS. You can see it through the long lines at the vending machines and students asking you for spare change to purchase their favorite flavored Kickstart. As caffeine has become the norm for a morning or midday boost for many teens nowadays, it appears students are turning to Kickstarts as an alternative to the jumbo-sized iced coffees and traditional energy drinks.

As schools try to add “healthier” variety in terms of beverage selection, the Kickstarts always leave the vending machines by the end of the lunch periods. As many students claim it helps keep them from not dozing off during class, it can be said that Kickstarts are sold in excess, but they should not be eradicated completely.

According to Caffeineinformer.com, the ingredients in a typical Kickstart feature 5 percent fruit juice to reduce the amount of sugar. In addition to the 90 mg of caffeine, Kickstarts have Vitamin C and B as well.

When looking at these drinks on a scale, Kickstarts are lower in caffeine with 90 mg, compared to others such as Monster Energy with around 160 mg, and Redline Energy with a whopping 250 mg of caffeine. Other flavors of Kickstart such as Strawberry Kiwi and Pineapple Mango have lower amounts of caffeine (68 mg).

While other carbonated and zero-sugar beverages in vending machines are available, Kickstarts will not solve the problem of having ‘healthier options’ for students. A better solution would be to reduce the number of Kickstarts into one or two fridges and/or vending machines. As it may be difficult to argue the health benefits of consuming caffeine, having a medium selection of Kickstarts available to students seems more rational.

Enjoying or relying on a caffeinated drink every once in a while has become the norm, and students at DGS shouldn’t be denied the privilege of having a normal-sized selection of Mountain Dew Kickstarts.