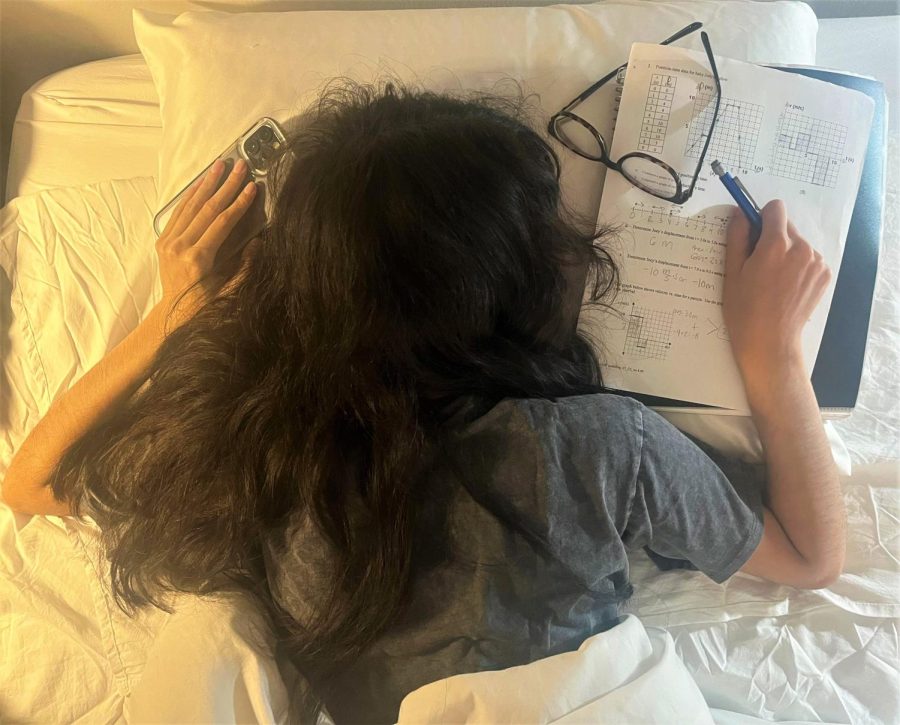 Phones, stress and other distractions limit the recommended 8-10 hours of sleep.

No matter the age everyone needs sleep to function. However, work, school, extracurricular activities and busy schedules can take up most of teens’ days, causing them to get less sleep.

Stress Management teacher Stephanie Henrikson describes how sleep helps every aspect of one’s general health, and that screen time is one of the main factors interfering with sleep.

“While school work is important and students are working hard, they need to know when it’s time to put distractions away and create a wind down for at least 30 minutes or so,” Henrikson said.

Henrikson states that according to the Center of Disease Control (CDC), teenagers should be getting eight to ten hours of sleep.

Sophomore Nathan Gudz tends to have a solid sleep schedule but struggles with his phone distracting him, which is the same problem Henrikson indicated earlier.

“I’m on my phone before I go to sleep, and then I usually sleep about maybe like seven hours. I feel like I could get some more [sleep] by staying off of my phone and go to bed a little earlier,” Gudz said.

Another reason why people aren’t receiving enough sleep is due to procrastination. Senior Josh Harap struggles with this habit and tends to do his homework late at night, affecting the hour he goes to bed. To improve his sleep schedule, Harap recognizes he needs to change his bedtime behaviors.

“I’ve been trying to be getting more sleep, and I’ve done that by getting to bed earlier because I’m not changing the time I wake up. So we’ll see if I could work around that schedule because I think sleep is really important for how you perform in school or life in general,” Harap said.

Junior Rory Saurez-Fuentes responds with how much longer their days are with school and work occurring within the same day; especially not being able to sleep in since school times are early.

“Both school and work on Fridays and Saturdays [takes up sleep]. I sleep for five to six hours on weekdays and eight to ten hours on weekends,” Saurez-Fuentes said.

Freshman Ethan Garrigues has a tight schedule with soccer. However, he has a firm belief that sleep is needed to function.

“I sleep for like eight hours; I do soccer after school until six. I get enough sleep,” Garrigues said.

Overall, many of the students interviewed seem to have different sleep schedules, whether it’s work, school, sports, procrastination or electronics getting in the way. Yet, take into consideration that sleep is important and maintaining a controlled sleep pattern will result into feeling best rested.