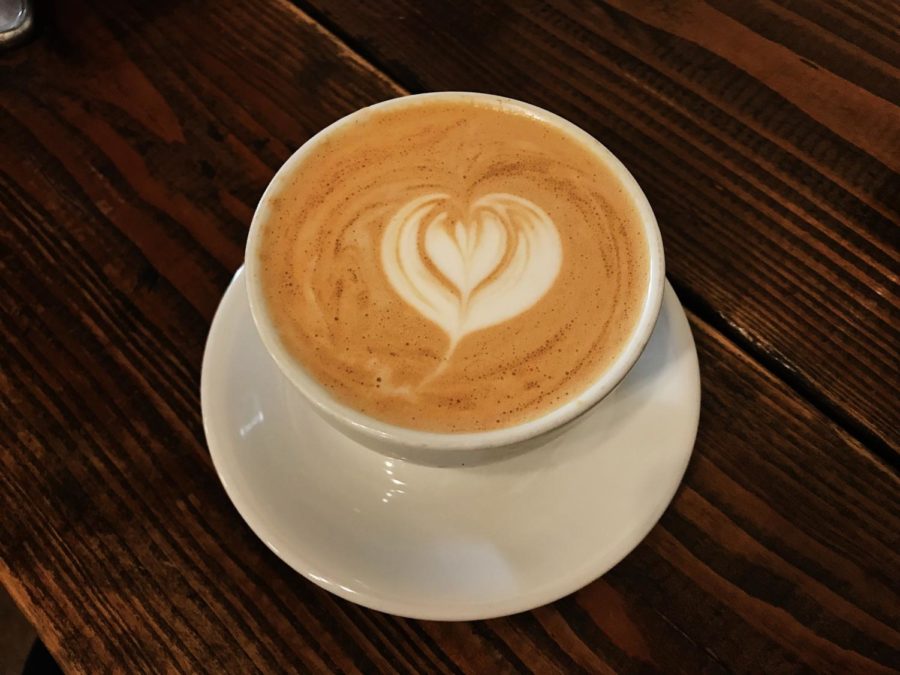 The bourbon spice latte from Five and Hoek had an intricate heart design.

Coffee stirs up controversy: Do you like it or not?

Life is better withOUT coffee

Starbucks is one of many coffee shops feeding teen caffeine addiction.

Coffee is everywhere. Walking around school, I constantly see students carrying Starbucks or Dunkin’, and now DGS sells La Colombe Coffee along with Caribou. It’s an addiction that needs to be stopped.

I hate coffee mostly because of the terrible taste. Not only is it bitter and sour, but most people have to add sugar and sweeteners to make it taste remotely drinkable. Take away all of the additives, and we’ll see how many people drink coffee, then.

Besides my grandpa, I don’t know a single person who drinks straight black coffee, so it’s pretty obvious to me that coffee itself tastes bad. The only way it’s drinkable is if you add caramel or cream, which only makes it unhealthy. Coffee is terrible tasting, and the way kids drink it nowadays makes it bad for you too.

Another thing I hate about coffee is how addicted everyone is to it. Half of my friends are late to school or events because they “needed their morning coffee,” and if they don’t get coffee they use it as an excuse to be rude to everyone. The coffee addiction is a true mood killer.

Personally, I would prefer to not rely on anything to have energy. I do have the occasional caffeinated drink, but I think it’s frightening how reliant kids are on coffee and caffeine.

According to the Addiction Center, “If someone drinks caffeine on a daily basis, they will develop a tolerance just as they would to other drugs or alcohol. After a while, the user requires more and more caffeine to produce the same effects of alertness.”

This means that if people drink coffee often, the amount that they crave will grow over time. However, caffeine addictions are different for everyone.

The National Institute on Drug Abuse states that “In adults, consumption of less than 400 mg of caffeine per day – roughly the amount found in four cups of coffee – is not thought to present any health risks. …Higher doses, however, can adversely affect mood, sleep, and physical and cognitive performance.”

Children have a lower tolerance to caffeine than the full-grown adults whom the above article describes. And, since teenagers are in their vital stage of brain development, it’s clear that they should be having less coffee than the four cup limit for adults. Drinking coffee every day increases caffeine addiction, and higher cravings mean that teens may go over the safe amount even more – it’s an endless cycle.

Too much coffee can lead to sleep disturbances and cognitive decline among other things. Sleep deprivation will lead to the desire for more caffeine to stay alert, and things will only get worse. Learning is impacted as well by too much coffee.

Obviously, that’s just for a regular iced coffee – adding sugars and flavors, like most teens do, will be more expensive. If you buy coffee every day, or maybe twice a day, you’ll be spending over a thousand dollars a year on your addiction. For some people, it might be worth it, but I simply couldn’t justify spending that much on a drink.

That money could go towards college, a car or future rent. Is it really worth it? Or would it be better to break your addiction and save your paycheck?

It may be an unpopular opinion, but I think people should avoid coffee, or at least be careful with it. Save your money, stop your addiction and get more sleep. There are so many drinks out there, like smoothies, that taste good and are better for your health.

Top 10 reasons why Starbucks is my favorite thing ever 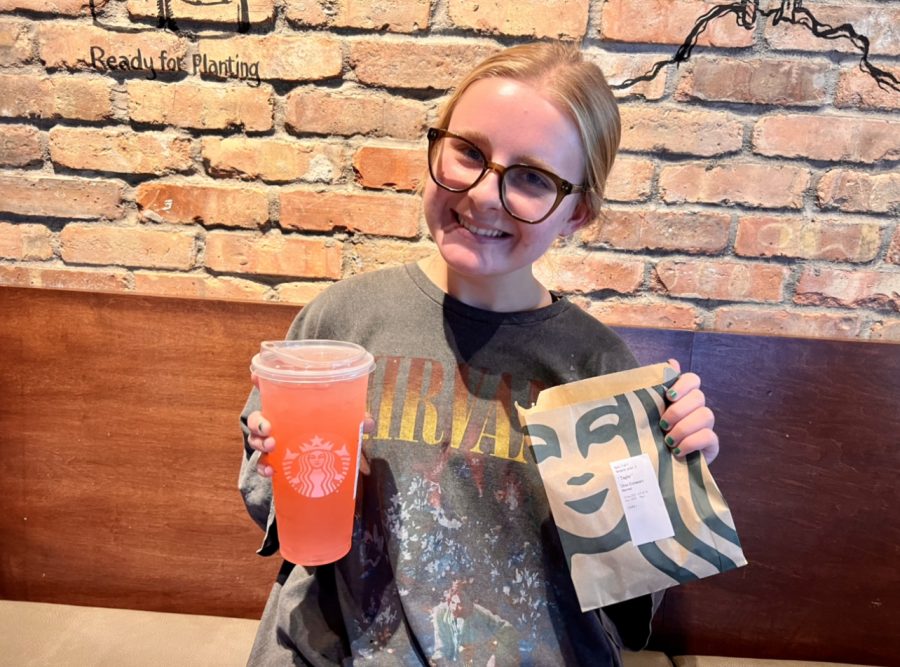 Taylor Neal with her go to order at her local Starbucks location.

If you know me and had to name one thing on my favorites list, you would probably put Starbucks at the number one slot. Ever since I got introduced to Starbucks, specifically the refreshers, I admittedly became addicted almost immediately.

I know I am not alone with my fairly new found addiction though. Almost every single friend or classmate has the same level of Starbucks addiction as I do…OK mine is worse.

Because I am so self aware of my addiction, I have been trying to process what has gotten me to the point of spending $55 a week on a single Starbucks refresher. So, I came up with the top 10 reasons why Starbucks is awesome.

#1 : The routine. The promised routine of including a Starbucks trip somewhere mixed into your day always makes me feel comforted. If you just got done with a long school day and have time, Starbucks. If you’re at the airport waiting for your flight, Starbucks. The comfort of having Starbucks built into your routine is addicting in itself.

#2 : The accessibility. No matter where you are, there are at least five Starbucks locations in a two mile radius of your location. If you are walking in downtown Chicago, there is a Starbucks on every corner. You will never not have access to a Starbucks, unless you live in the middle of nowhere.

#3 : Productivity levels rise. Coming from one of the biggest procrastinators in history, this is probably ironic. However whenever I am doing work at Starbucks, I swear my productivity levels exponentially increase. If you put me with my favorite refresher and a 10 pound stack of homework, I would complete it with a smile on my face. And trust me, it will get done.

#4 : It is a reward. If you need help rationalizing spending upwards of $9 for a small coffee, making it a reward works 100% of the time. Got an A on the test that you spent hours studying for (at Starbucks), you deserve that coffee. Just got done with a brutal gym session, you earned your Starbucks. This reason always helps me rationalize my favorite addiction.

#6 : Time filler. Sitting at home and having nothing to do? Stop at your local Starbucks cafe and get your favorite coffee or drink. This experience only takes between 20-30 minutes, so short enough to not take up your entire day, but long enough that it makes you get the sense of accomplishment and say, “Hey, I did something today.”

#7: PUP CUPS. One of my favorite things that Starbucks has to offer are pup cups for your dog which are just whip cream in a cup. Just take your dog through the drive through line and order them a pup cup. Not only do the baristas gush over your cute dog, but now you and your pup can both be addicted to Starbucks.

#8 : The sweetest baristas. I am proud to say that me and my local Starbucks baristas are my besties. Not only are they the sweetest people ever to me, they also remember my name and exact order every time, (this generally requires insane consistency over an extended period of time.)

#9 : Stars. Stars is the Starbucks reward system. Basically how it works is you scan for stars every time you order and every start you earn is $1 spent. Once you get 150 stars it’s a free drink, or 400 stars is a free coffee cup/ mug. I always look forward to getting a new Starbucks cup and using it entirely with star points, because it’s free. Actually it’s not. You had to spend $400 on drinks/ food in order to get a free $20 cup but it’s OK, I love my little collection and always look forward to adding another member.

#10 : It’s just Starbucks. There are infinite reasons to just be utterly obsessed with and devoted to a fast food company. Everywhere from being the most productive person on the planet or just loving carrying around your cute little Starbucks coffee mug, I owe literally everything to this restaurant. I would not be who I am without it.