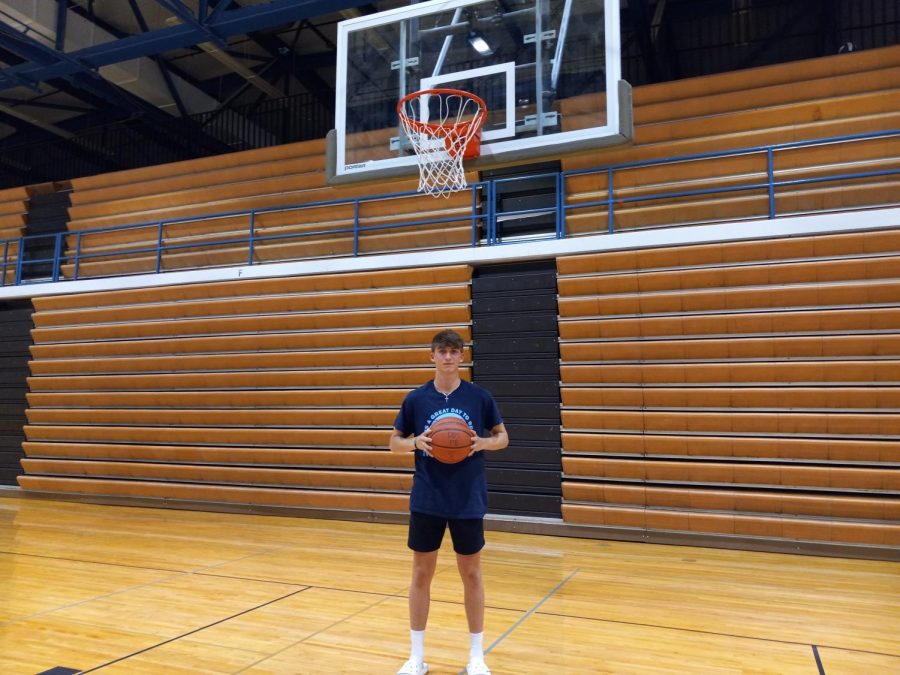 The game of basketball doesn’t look simple, but for senior Justin Waterman, it comes with ease.
From grade school to high school, Waterman has been playing on a basketball team. During his sophomore year of high school basketball at DGS, he was moved up to varsity.

“I’m a guard, I’ve pretty much been [a guard] my whole life, but this year I’m going to have to play forward,” Waterman said.

Waterman originally started playing basketball in a recreational league after following in his older brother’s footsteps.

“I started to love it,” Waterman said.

Waterman has enjoyed playing ever since recreational leagues to high school.

As a sophomore, Waterman finished his year on the JV basketball team, but was asked to play the last five games to play for varsity. Waterman said yes and has been on varsity since then and is ready for his final year being a senior.

Besides playing for varsity in high school, Waterman had also played for a summer Amatuer Athletic Union (AAU) travel team called The Grind for three years. This past summer was his last, but he was able to travel to different places with his teammates like Indiana, Wisconsin and more.

“(I) was at a tournament for my AAU team somewhere local like Joliet and we went 3-0 so we got a medal, it was awesome,” Waterman said.

Waterman also recalls one of his favorite moments with his travel team with a big grin on his face.

“We were in a really big tournament, and we were playing a team that was pretty high ranked…we were the underdogs, we weren’t expected to win…but we fought really hard the whole game and ended up winning by about five [points], so that was awesome,” Waterman said.

To Waterman, basketball has more meaning than just a game.

“The competitive spirit that’s on the court and the atmosphere around you makes it really fun,” Waterman said.

Besides the good things about basketball, there are some setbacks and injuries that come with playing. Waterman encountered an injury that had him sitting out for three weeks of his high school basketball career.

“During a game I stepped wrong and my ankle completely rolled [circles his ankle as demonstration] and I heard a loud pop, I struggled to walk…I had to see the trainer everyday. It was really rough,” Waterman said.

Throughout Waterman’s journey playing basketball, he has experienced some pretty cool moments. His face lit up as he remembered a moment from sixth grade.

“It was the end of the third quarter, I went for the shot, and I made it; I had a half court shot. Everyone was going crazy, I still remember it,” Waterman said.

Waterman’s plans for basketball post high school are still up in the air.

“It would definitely be fun to play in college, that’s definitely the goal, but if not, I wouldn’t be too upset,” Waterman said.

Waterman said varsity basketball playoffs begin in March, so be sure to catch a game.