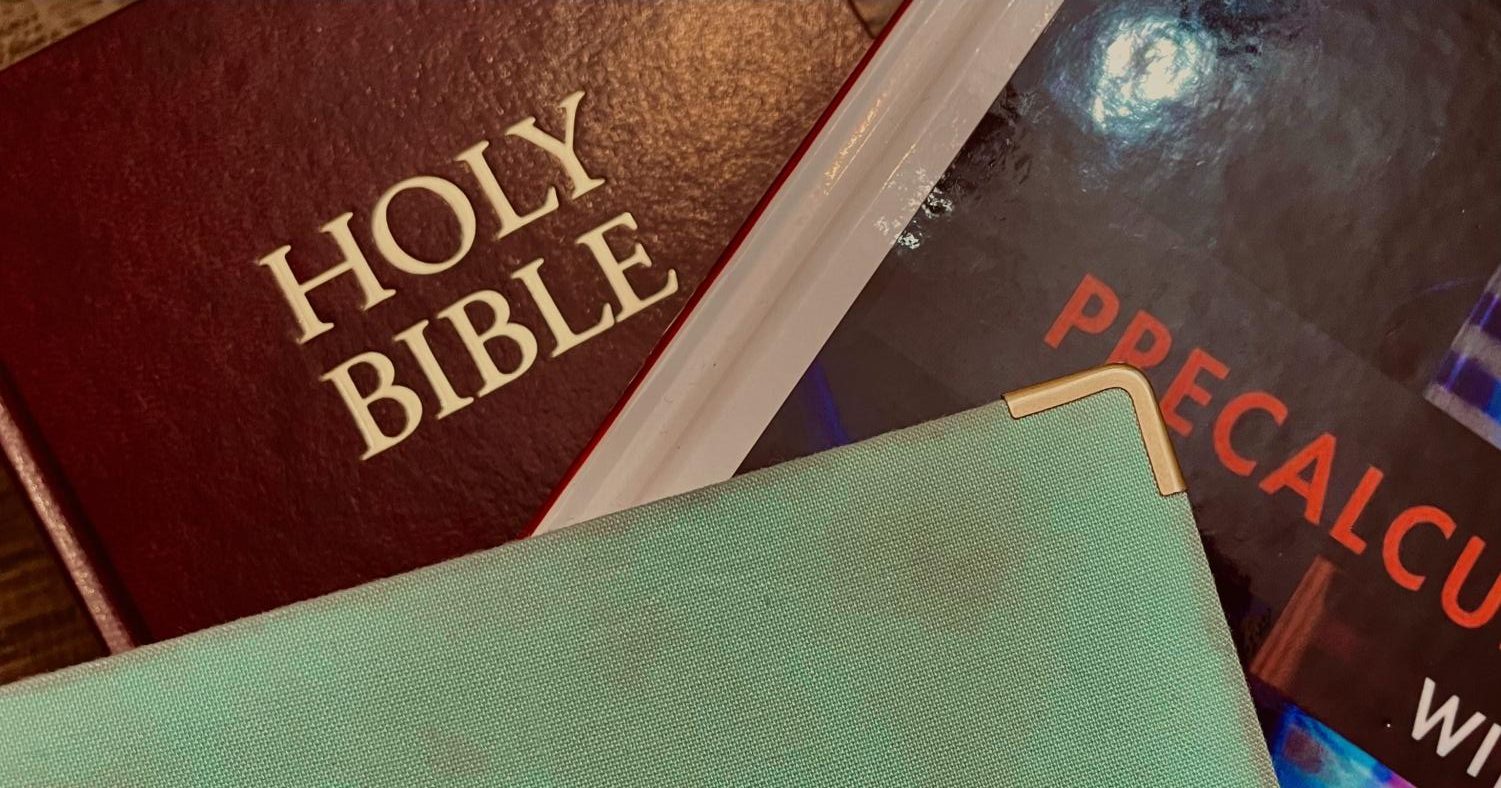 “Do you miss private school?”

Senior Ashley O’Connor looked up and laughed instantaneously as she replied:

For practically every teenager, stepping foot into public high school is like an entirely different world. For these four students, it quite literally was. Ashley O’Connor, Sarah LeTourneau, Tyler Engle and Gabriella Skillom all come from private Catholic elementary, middle or high schools. The differences for them were astounding; entirely new people, spaces, activities, teachers and classes.

For some students, private school was like its own little community. DGS senior Tyler Engle had 14 kids in his graduating class at his private Christian middle school and was comfortable in the tight-knit community that the school generated.

“The environment was surprisingly chill, everybody had faith but wasn’t too serious about it at [that] point. The teachers definitely talked about Christianity and faith, but I don’t think it was too strict of an environment. It was chill and accepting most of the time,” Engle said.

However, for many other students, private school was far from a comforting community. Classrooms filled with judgment, torment and restrictions bound their daily lives– especially from the teachers. Senior Ashley O’Connor attended a Catholic elementary school and recounted her negative experience with the institution.

“For the most part, the environment was terrible. It was extremely hostile, a lot of favoritism that I was never a part of. There were one or two teachers that were legitimately nice, but everyone else was horrendous,” O’Connor said.

DGS junior Sarah LeTourneau attended another Catholic elementary school. LeTourneau discussed the harmful and judgmental treatment they received from fellow students and teachers in the community.

They were so judgmental about everything. I was in the closet, and they would make a lot of gay jokes like ‘oh well that’s gay,’ and I’m just kind of sitting there like ‘oh well I’m not going to tell anyone then.’ The teachers were kind of sexist and very very religious”

Even if the community itself wasn’t directly harmful to students, the overbearingness of the institution’s religious teachings harmed some students during their religious development. Downers Grove North senior Gabriella Skillom attended private Catholic school from kindergarten through eighth grade, and a private Christian academy her freshman year of high school. Skillom explained how her experiences with private Catholic school ruined the Catholic religion for her.

“I think the worst thing was just the overbearing religious aspect… that being said, the school really pushed the Catholicism agenda on everyone in such an overbearing way. It’s an unfortunate thing to have a Catholic school be the thing to ruin religion for you,” Skillom said.

Engle also noted the judgment and academic pressure he experienced throughout his years at his private Christian elementary school.

“Sometimes they would be very judgmental about religion. If you didn’t go to certain churches or didn’t have certain beliefs, I feel like they could be really judgmental, and you could feel like you weren’t living up to their standards. It definitely could be somewhat toxic as far as getting the grades you wanted,” Engle said.

The experience of maintaining and building friendships at the private schools was very different amongst the students. Engle explained how his friendships exceeded grade levels, allowing him to have lots of friends at the school.

However, abundant and promising friendships weren’t the case for all students. O’Connor revealed her experience with loneliness and isolation cultivated from cliquey children at her school.

“It was extremely cliquey. For most of the time there, I had pretty much no friends. The first time I ever had someone with who I was very close with was seventh grade,” O’Connor said.

Being closeted as an LGBTQ child in Catholic school brings its own set of challenges, especially when you are forced into hiding. LeTourneau recounted their experience with ‘gay jokes’ and harmful comments from peers, which resulted in the loss of friendships and connections.

“I was closeted in Catholic school, so it was kind of hard because I was told I was wrong. A lot of people made gay jokes… I would say I had a few friends but not a lot. People weren’t the nicest,” LeTourneau said.

All four students spent their entire childhoods at private Catholic institutions with a system they were fully immersed in. Transitioning into a larger location with a new curriculum and a different set of social standards posed a challenge for any child.

The routine that they’ve become accommodated with almost their entire lives has been completely rewritten. Very few of the students were able to bring friends along with them into high school, while a majority of their classmates continued on to private institutions. This resulted in them navigating the new public school system practically entirely on their own.

For O’Connor, LeTourneau and Engle, the daunting size of public school, as well as the lack of connections and the sheer unknown of what’s to come, posed a real fear for them. The stigma surrounding the level of education fed into the overall uncertainty of public school.

“I was terrified because I didn’t know anyone, so I wasn’t sure what the experience was going to be like. I was also just told it wasn’t going to be as good as a private school because they don’t have all of the ‘daddy’s money’,” O’Connor said.

It was very scary- I didn’t know how to navigate a school of a big size. There were a lot of people, which I wasn’t used to. I was very scared to interact with people. It was interesting to see how people operated in a much more social space”

“It was really overwhelming. I went from having 35 kids in my entire grade to here where it’s like 900 so it was a lot. I think it was also nice because it gave me opportunities to meet new people that I can actually connect with better and they care about me,” LeTourneau said.

“Public high school was mind-boggling for me the first day I got to North. I had no clue what was going on because it was not an environment I had ever been in before. It was a lot less controlled, and I think that was just shocking to me that not everyone’s school was the way private Catholic schools are,” Skilllom said.

“Just having any freedom to do anything other than the base eight classes is amazing. We have so many super cool electives that we can take, as well as you get to junior and senior year you can choose your social studies, English, all these amazing things that you can explore,” O’Connor said.

“I think it’s better because they’re more opportunities. At my school, they put you in a class and you couldn’t change what you were in. Here you have so many electives,” LeTourneau said.

School, in general, is a huge cog in the process of development of self-identity and expression. For Skillom, she felt that her identity was suppressed during her years at private institutions, and it took her a while to get it back. Once arriving at DGN, Skillom believed that she was able to find the diversity and self-expression that she needed to fully discover who she was.

“I think that my identity was suppressed from Kindergarten to about my junior year. I was conditioned to behave a certain way in order to fit the standards of a private Catholic organization, and so that forced me to behave in a way that I knew I wouldn’t usually behave. It happened so often and for so long that I genuinely became a person that I knew I was not for the sake of my surroundings and expectations,” Skillom said.

Skillom elaborated further on how the way she perceived herself changed after arriving at DGN.

“After being introduced to North and all the diversity and self-expression at the school, over time that allowed me to be whoever I wanted. I’ve become an expressive person that I used to be jealous of seeing in others. It’s great, honestly. I know without transferring to a public school I’d still be someone completely different,” Skillom said.

For Engle, his experiences with private school largely impacted his personal religious beliefs. However, attending public school has allowed him to shape his own beliefs and identity as a whole, away from the rules and regulations that the private school preached. Utilizing his experiences from both private and public school ultimately shaped what his identity and beliefs are today.

“Private school shaped my beliefs a little. I’ve taken some liberties with my own faith, I don’t fully follow everything they say. I think public school has also shaped my beliefs… I have figured out my social identity based on those experiences,” Engle said.

For many children in the LGBTQ community, the Catholic school environment results in shame surrounding their personal identity. This shame and suppression can cultivate fear and even trauma along the way. Both LeTourneau and O’Connor identify as members of the LGBTQ community and shared how public school allowed them to embrace their true selves and grow into their identities.

I would say private school made me scared more than anything as well as gave me a lot of really bad experiences that I still have to live with and trauma. Public school has helped me grow in so many different ways and taught me so many different things, as well as education-wise, but just person-wise and how to be a good person”

For LeTourneau, they believe that private school did play a role in their personal development but public school allowed them to become more comfortable in their own skin.

“Private school repressed it [identity]. It made me who I am, but not in a good way. But public school definitely helped me come out of my shell and become the person I am today,” LeTourneau said.

An undiscussed but profound difference between public schools and private schools of all grade levels is the prestige that a paid-for private education brings. Especially for high schools labeled as ‘college preparatory,’ these academies do raise an advantage in the college application and admissions process compared to regular public high schools.

I know I probably would’ve been better off somewhere far down the road saying ‘I graduated from Benet Academy’ as opposed to ‘I graduated from Downers Grove North.’ Unfortunate, but the truth. I don’t miss the stress that came with it though or the tenseness of just being present in the school”

Every student has their own unique experience from private school containing both positive and negative memories. Even if there is some discourse surrounding the experiences of private schools, most if not all students can agree upon the fact that it made them who they are today.

Although there are differences and similarities between both private and public schools, for a majority of students entering public school for the first time, the public school made up for what a majority of private schools lacked: freedom. Even though the transition from these two different worlds brought along its own set of challenges and fears, the freedom that public school provided allowed the development of student’s identities to flourish.

But in the end, no matter where one comes from or what kind of education they received; it matters what they’ve learned from their experiences along the way. Ultimately those lessons learned and those experiences will shape what one does, how they treat others, and most importantly who they are entirely, no matter what kind of school system they were brought up in.