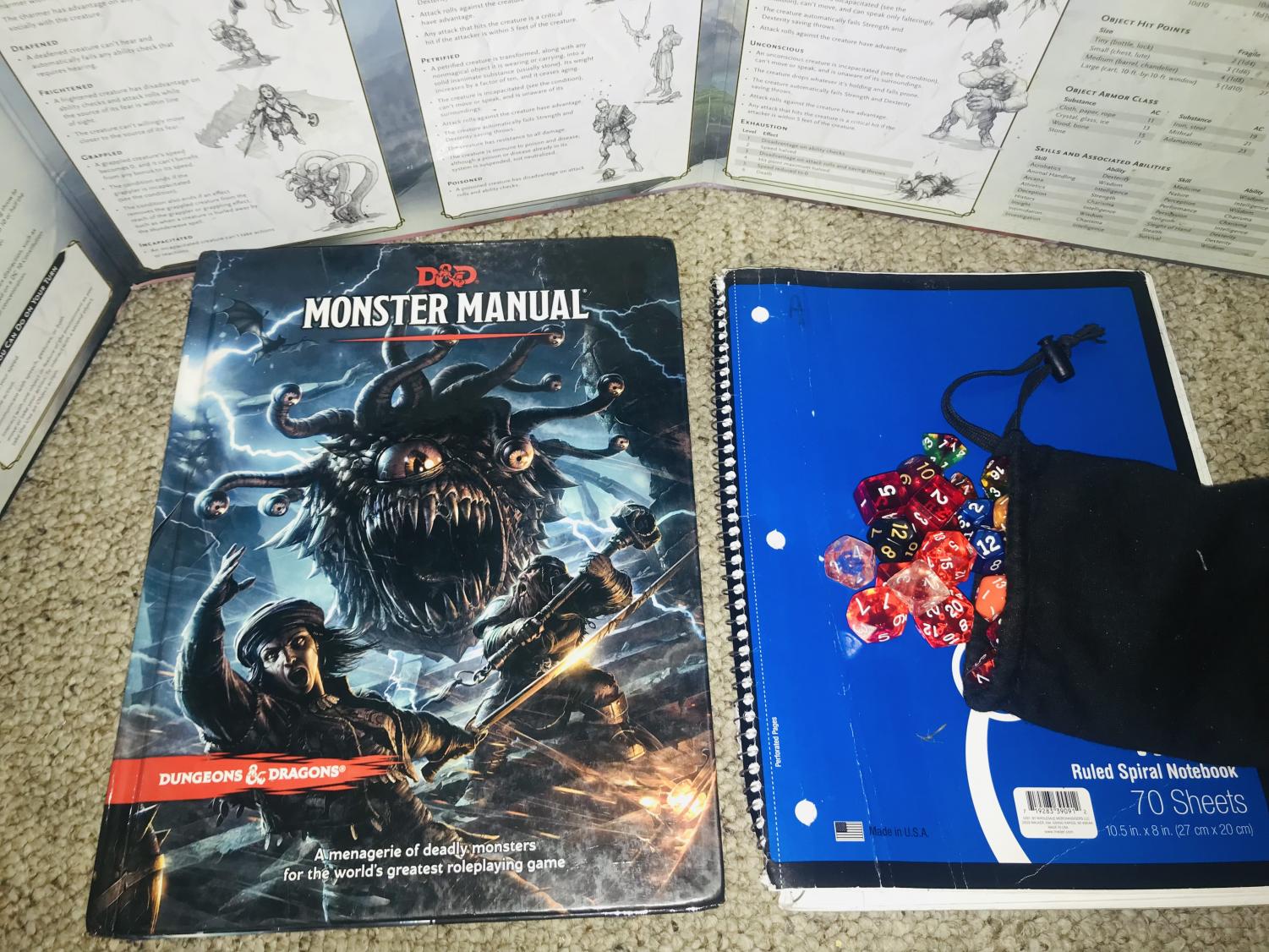 Dungeons and Dragons, a collaborative storytelling game for anyone, has been taking mainstream media by storm and has even found a place in high schools nationwide. (Jake Hahn)

Dungeons and Dragons, a collaborative storytelling game for anyone, has been taking mainstream media by storm and has even found a place in high schools nationwide.

Dungeons and Dragons: A social fantasy escape for all

Dice fly and hit the ground with a rattle as cheers fill the air, all celebrating a successful action in the game of Dungeons and Dragons. Dungeons and Dragons is a tabletop role-playing game that has recently gained popularity due to its feature on the hit Netflix show “Stranger Things,” as well as its popularity online in podcast form. The game’s conductivity to collaborative storytelling is its main drawing point and is why many have flocked to the game over the past few years.

D&D has spread far globally, even making its way here to DGS in the form of the tabletop gaming club, home to all things board games. English teacher and tabletop club sponsor Ryan Reyes has noticed some aspects of D&D both as an observer and as a player that he feels have positively impacted student players.

“I think when it comes to Dungeons and Dragons, it’s just such an imaginative game and a game that offers you to really do what you want to do in terms of exploring and telling a narrative. Being an English teacher, I’m really into stories, and I just really like that aspect of it. I think it builds community, gives people a chance to come together and just have fun,” Reyes said.

There is a freedom given by an interactive experience like Dungeons and Dragons, one that allows friends and strangers alike to come together as one and tell their own unique stories. The game has little to no restrictions on what you can do or who you can be; these are all decided within the minds of each individual player. Everyone creates a character completely by themselves, and who that person is or what they do is only determined by the person playing them.

I think people are starting to realize how beneficial the game is to both creative thinking and storytelling.”

Each character is then thrust into an open-ended fantasy world in which free choice is the name of the game. One player, the dungeon master, provides everyone with the setting and exposition, and after that it is up to player agency to determine where the story goes. Senior and tabletop club president Adam Anderson commented on the undetermined nature of D&D and how that aspect helps bring its players closer together.

“It’s like a collective storytelling project; there’s something about telling a story with a group of people that inherently brings anyone closer. I met most of my best friends through D&D and I continue to bond with people over sharing the hobby and playing the game,” Anderson said.

The game’s popularity has grown even more during the COVID-19 pandemic, as it can be played both in person and online, allowing for a contactless and risk free experience with friends. The game is entirely social no matter how you play it, so it can be used as an excuse to keep in close contact with friends. Senior Leo Hermans discussed how D&D helped keep his social life alive during the pandemic.

“It [D&D] was a fantastic way to hang out with my friends over the quarantine. I got to play in several large, long-running campaigns and they were just a treat. [D&D] gave me so much to look forward to each week, and I can’t thank it and those I played with enough,” Hermans said.

Due to the fact that the story is crafted by the individual, one’s experience playing the game could cover any different style of story. It could be a horror themed adventure about zombies or vampires, a comedy detailing a bank heist or even a musical if the players are so inclined.

This also gives the player freedom to incorporate several personal themes into the story and characters. Through projecting real-life problems into the world of the game, many different topics and themes can be discussed, much like movies or books may follow central themes like family or loss. Senior Aidan Kljucanin discussed how D&D can help address issues and cover personal themes.

“I definitely think that D&D as a storytelling medium can be used to tell personalized stories that help people cope with trauma or other emotional issues. I’ve definitely heard of D&D being used to develop social skills in kids. Even just the escapism of standard D&D could help people relieve the stress or grief of their ‘real’ life,” Kljucanin said.

Like most things, D&D is not a game for everyone. It requires a lot of reliance on the imagination and even more talking and thinking like you are someone else. If one is willing to take the plunge into a fantasy world, however, it provides an experience that cannot be like any other previously experienced.