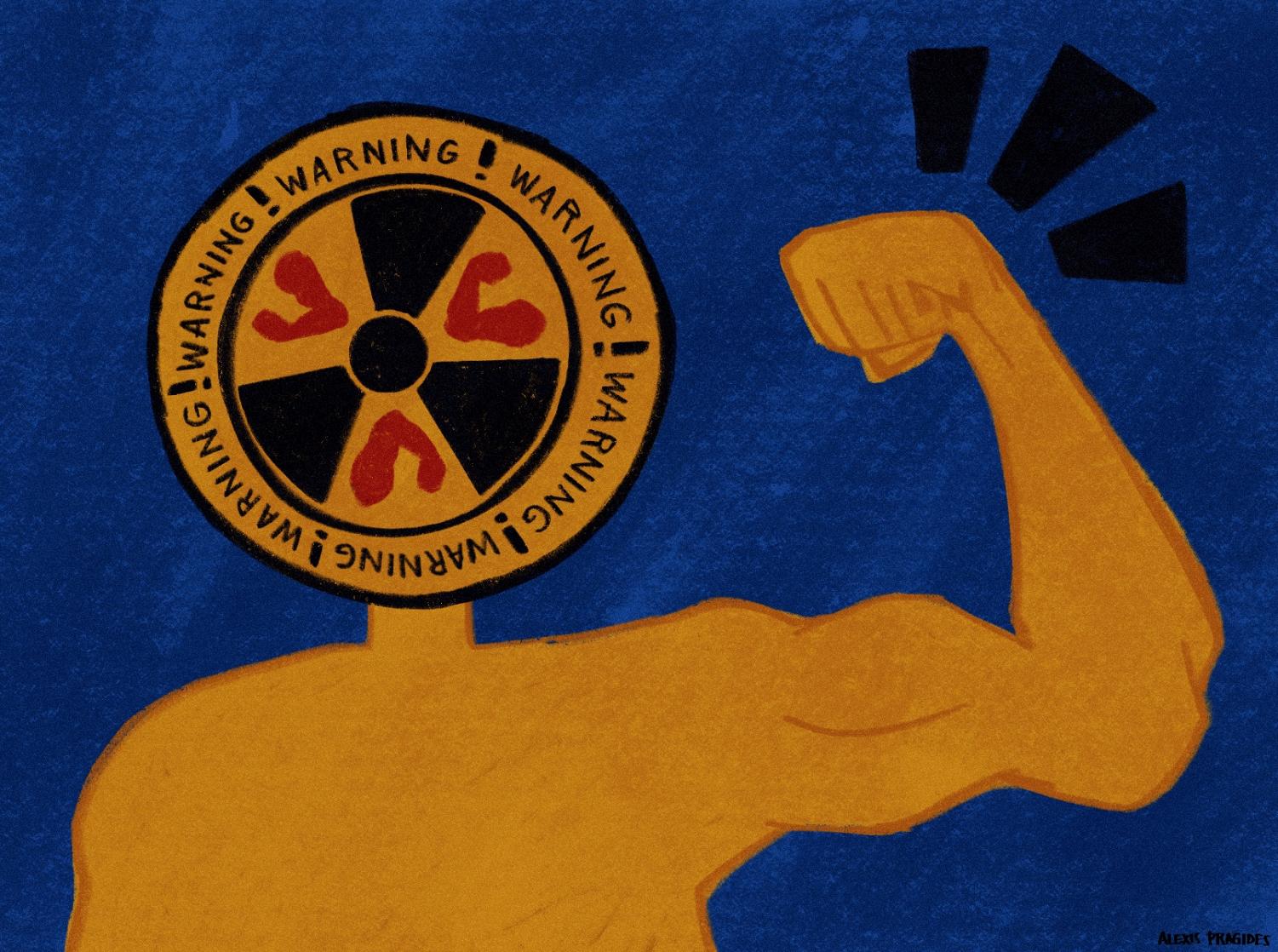 Toxic masculinity effects more people than some may assume and hurt the way we see men. (Alexis Pragides)

Toxic masculinity effects more people than some may assume and hurt the way we see men.

The effects of toxic masculinity on the adolescents psyche

“Stop being a girl,” “stop being gay” and other sayings like “be a man” all come from the same umbrella term — toxic masculinity. What some may pass as a joke can hurt an individual’s psyche, showing the effects that toxic masculinity brings to everyone.

Toxic masculinity as defined by Learning for Justice is a narrow and repressive description of manhood, designating manhood as defined by violence, sex, status and aggression. It’s the cultural ideal of manliness in which strength is everything while emotions are a weakness, which can range from emotional vulnerability to simply not being hypersexual. To learn more about what toxic masculinity means, you can listen to this podcast more focused around the misconceptions of the term.

“In eighth grade, boys in my class would often insult me and say unnecessary things about my body, gender and sexuality. They would also throw around the word ‘gay’ as an insult way too often,”

“In my eyes, toxic masculinity is two things, I see it, for one, as explicit behaviors that men can display that may promote misogyny, homophobia, aggression or something else like that. But I also see it as the set of standards that are placed on men for them to be up to scratch with what society has deemed ‘being a man’, like being physically strong, silencing your emotions, protecting your family, etc. So I really think that there are things that a lot of guys do that could qualify as toxic masculinity, which is on them, but there are also a lot of things that society has constructed in terms of what they want the ideal man to look like, and I think a lot of it is just a bit stereotypical,” Bull said.

Bull explained some of the effects that toxic masculinity can cause and his experiences with them.

“I feel that those stereotypical ‘manly’ traits like self-sufficiency and physical strength are things that I seek to improve in my own life. The biggest problem I have with those stereotypes is the idea that a guy has to suppress his emotions and always be ‘tough’. I feel like we’re constantly learning so much about mental health and depression and all sorts of issues that people deal with and that those old stereotypes should probably be phased out as we learn more about those things,” Bull said.

“No I’m a man and men are supposed to act like men therefore toxic masculinity is not a thing,”

Bull continued, stating, “I’m an anxious person, and I often overthink and panic about things and I think it’s really unhealthy to be told to suppress those feelings, and I think that there are way too many situations where guys are really struggling and are just told to get over it or be a man.”

On Jan. 15, a form was sent out to the school explaining toxic masculinity and asked students several questions on the topic. There were close to 200 responses and, while acting as a small sample of people at DGS, over 83% of respondents said that toxic masculinity existed with the other 27% saying it did not.

“I am someone that rather fits in the description of a ‘toxic male’. What bothers me is the fact that other people, especially females, are trying to change who I am and how I act. I was raised in a very traditional family, so yes my opinion and definition very much varies than someone that was raised in a more LGBTQ+ friendly household,” they said.

They continued, stating, “Even though I have been told to ‘man up’, do something because ‘I’m a man’ or engage in an activity because ‘men are supposed to’, I am intelligent enough to understand that they are wrong and that whoever I decide to be is manly enough for those around me. It hurts when those people see me as someone who is rather ‘toxic’ and should change because their values are different than mine,” they said.

The anonymous source goes into why they don’t believe in toxic masculinity.

“I can’t fully disagree with the idea of toxic masculinity, it’s the ideologies and actions that people have made toward toxic masculinity. The term ‘toxic masculinity’ is very misleading because many people see it as a trait that men have that we should get rid of, but rather it’s an ideology that men are trying to escape that a lot of people are not letting them subconsciously,” they said.

They continued, stating, “I very much agree and believe that men should be more welcomed to show their emotions and they shouldn’t be defined by how strong they are or how hypersexual they are, but that isn’t really the focus that our generation has as of right now. I’ve seen many people on social media like TikTok or Instagram talking about what a ‘manly man’ is. Those are the things that make me mad and totally ignore the true definition of toxic masculinity and the problems we are trying to solve; by trying to define what masculinity is, degrading those that fit the stereotypical ‘strong’ man, or simply judging a man’s personality because he behaves like a ‘guy’,” they said.

In the December cover of Vogue, Harry Styles was the first man to pose by himself with a dress. Many people responded to the unorthodox appearance, with reactions ranging from those who were upset with him, happy for him or just confused about the situation. They talk about this event and their thoughts about it.

“The Harry Styles dress was something cool that allowed those males that want to dress in dresses or more feminine close to feel more comfortable. I am sure that a lot of people were mad because he didn’t dress in the traditional stereotype of what men should wear in society,” They said.

Junior Charlie O’Neil talked about his experience with toxic masculinity and what he has seen in school today.

“[Toxic masculinity has been in my life] all the time, nothing severe, but sayings like ‘man up’ or ‘that’s gay’ even if you do something that doesn’t even seem ‘different’, people will still toss sayings like that and it just changes your mindset, especially when it happens all the time in your life,” O’Neil said.

For freshman Naomi Yong, the shift between high school and middle school has highlighted a large difference between the prevalence of toxic masculinity in both settings.

Having the mindset of being masculine can be draining to some, and PE teacher Ellen O’Brien spoke on how masculinity affects women in a more male dominated profession.

“I am an assistant athletic director, and I do some things administratively, sometimes I feel a little [isolated] because I’m like ‘alright I get it, I’m not a man’. Sometimes it’s a fine line that we have to walk, and I know that in my career here [that] if you push back then you’re labeled a b**** or [they say] ‘I see what you’re doing’ or ‘come on Ellen’ and it’s really a tough thing that society has had since the beginning of time. The thought of ‘the man has to provide for the woman’ and I think that is where [toxic masculinity] really where it stems from,” O’Brien said.

O’Brien continued, talking about what she sees as a P.E. teacher.

“I think it has a lot to do with [the idea of the] ‘alpha male’ and how men are taught that way; however, I do think that it is starting to change some. You see it in class quite a bit with a student not being able to do something right, you see others who say ‘come on man’ and as a teacher you see a lot of comments that are thrown out there to see how others will react,” O’Brien said.

O’Brien reflected on the importance of talking about toxic masculinity as a society in order to progress as a community.

“Life is changing for us and I think it’s important as we move forward [that] we try to understand what’s going on and that kindness and compassion should be aligned with your true purpose and I think that we have to find a way to make things work among ourselves,” O’Brien said.