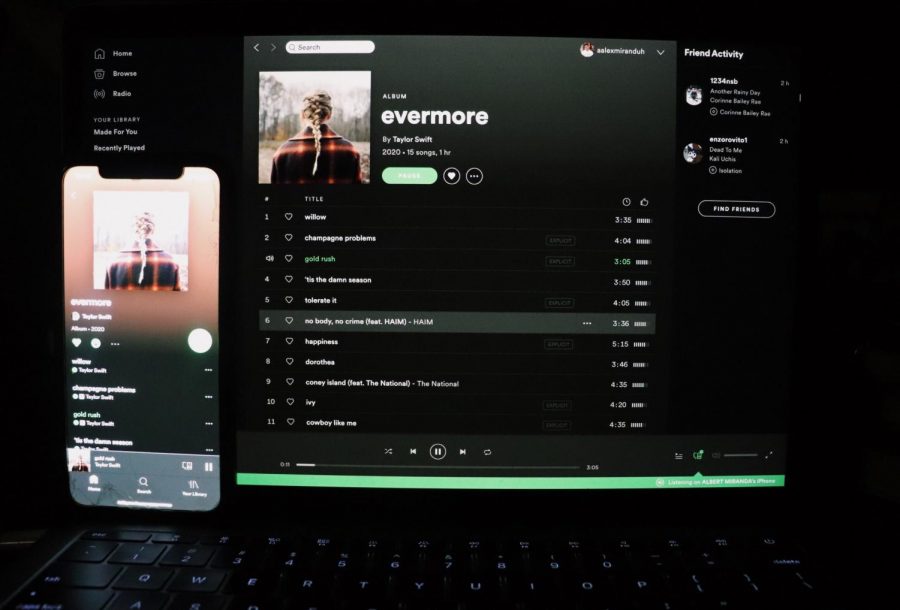 A mere five months after the surprise drop of her eighth studio album Folklore in late July, Swift announced to her 141 million Instagram followers on Dec. 10 that her ninth album, Evermore, would be available on streaming services at midnight eastern time. In a normal year, the thought of Swift dropping two back-to-back records within a few months span would be an inconceivable endeavor; this is no normal year. If there is one lesson 2020 has taught us, it is to expect the unexpected—in that regard, Swift is the professor.

In announcing Evermore, Swift explained her thought process in rolling out new music on an accelerated timeline: “We were standing on the edge of the folklorian woods and had a choice: to turn and go back or to travel further into the forest of this music. We chose to wander deeper in.”

To put it plainly, we just couldn’t stop writing songs. To try and put it more poetically, it feels like we were standing on the edge of the folklorian woods and had a choice: to turn and go back or to travel further into the forest of this music. We chose to wander deeper in.

A smart choice indeed. Folklore was met with massive commercial, fan and critical success, most notably receiving a Grammy nomination for album of the year. Given the highly auspicious response, the move to expand upon the source material with more music—15 tracks, to be exact—was a decision one could easily get behind.

It’s not like Swift, or any of us, has much else to do right now anyway.

As the sister record to Folklore, Evermore maintains a similar sound to the aforementioned work while further exploring its experimental boundaries, fusing heavy alt-rock influence with nods to Swift’s country roots. The new release also mirrors characteristic narrative arcs present in Folklore (more on that later).

Evermore opens with lead single “willow,” a song highlighting the intriguing complexities of developing an infatuation with a significant other. Strings hum against Swift’s calm, soothing vocal accentuations, creating an entrancing sound listeners can comfortably become engrossed within. The accompanying music video, released on Dec. 11, matches the track’s dark, warm tone with visuals of Swift traversing a forest scene while following a mythical gold string leading to her lover.

The inclusion of the 90’s trend lyric in this song is an especially interesting development, as many look to Swift’s fifth studio work, pure pop album “1989,” as the peak of her mainstream career with famed hits such as 2014’s “Shake It Off” and “Blank Space.” The adult, indie atmosphere of Evermore is a far cry from Swift’s pop-infused hits of the past, the noted lyrics a nod to her progression as a singer-songwriter with artistic fluidity and depth. Swift’s self-aware songwriting is present in her most enjoyable tracks; “willow” is positioned snugly within this category.

Evermore works best in its complexity, specifically in its introspective dissection of vivid characters spun to lyrical life in underscored tracks. Folklore’s insertion of a love triangle in songs “cardigan,” “august” and “betty,” each sung from the perspective of a different character within a convoluted relationship, was the first time Swift connected fictional stories together throughout an album. She chose to continue the character study route on Evermore in rich detail, most notably singing of childhood reminiscence and heartbreak.

“Champagne problems,” for example, is told from the perspective of a young woman breaking up with her boyfriend the night he was planning to propose. Swift harmonizes the heartache to a mourning grand piano, regretful pain evident in her voice.

Your mom’s ring in your pocket; my picture in your wallet / Your heart was glass, I dropped it / champagne problems

Evermore is not complete without a few surprises. On “no body, no crime,” featuring the Haim sisters, Swift sings about killing a man who murdered his wife to be with his mistress. Beginning with wailing sirens and a vengeful Swift murmuring “he did it,” she vows to avenge her friend Este from her cheating husband.

As for the idea, Swift communicated to her fans on a Youtube Live chat that she “…was inspired by [her] obsession with true crime podcasts and documentaries and used one of [her] best friend’s names as the main character.” Classic Swift.

The two best songs on Evermore are “gold rush” and “long story short,” both of which follow the traditional Swift formula of hooking listeners with a captivating, impossible-to-not-sing-along chorus.

The former is an enchanting track depicting Swift’s dilemma of being in love with someone who she feels everyone else is also attracted to. Acknowledging her jealousy, Swift understands she must distance her head from her heart to avoid getting hurt.

“Long story short” vocalizes Swift’s internal monologue concerning her outlook on past pitfalls in relationships and life experiences. Swift is appreciative of prior shortcomings, for they’ve humbled her and constituted a mature sense of self worth.

Pushed from the precipice, climbed right back up the cliff / Long story short, I survived / Now I’m all about you

Evermore closes with its title track featuring indie folk band Bon Iver, also found on Folklore’s “exile.” A slow burner, “evermore” is perhaps the most fitting closing song Swift has released on an album thus far. It’s a track rooted in healing, a peaceful reminder that pain can be mended with time and hope is positioned on future horizons.

In emulating Folklore, Evermore surpasses its predecessor with varicolored lyricism, intimate charm and sonic cohesion. After nine albums and over 14 years in the music industry, it is clear Swift has no intention of slowing down, global pandemic or otherwise. Thankfully, she’s here to stay—forevermore.