Being a part of the LGBTQ+ community in the suburbs 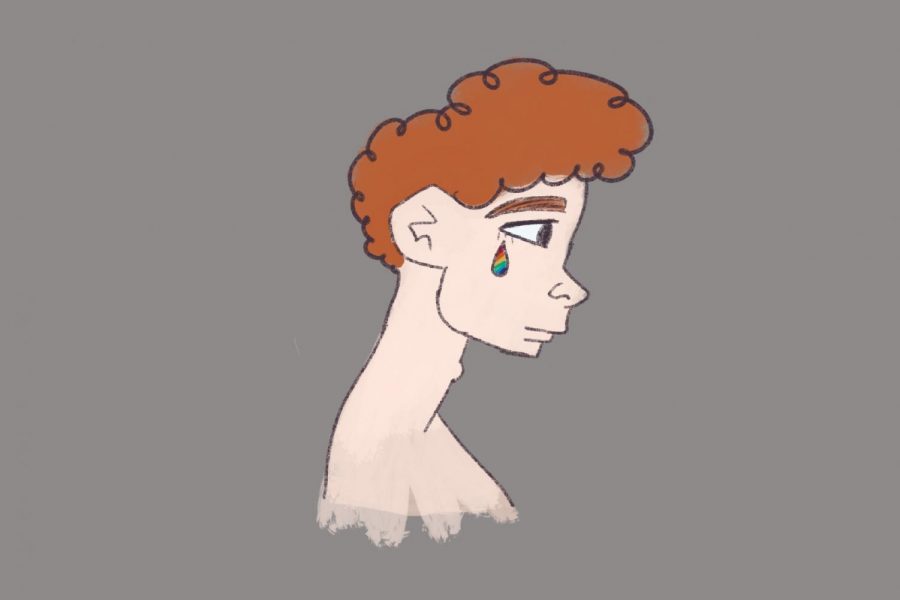 With around 2,800 students that attend DGS, there are 2,800 stories to be told. Being a part of the LGBTQ+ community is something that people, especially in the suburbs, tend to hide from. They are too afraid to see the hate that comes with holding their partner’s hand or showing the same affection to your significant other as a straight couple would show.

Fear can come from many things in a person’s life. From their environment to religious beliefs: fear is a big factor in the LGBTQ+ community.

Junior Faith Nelson talks about her story of being raised in the Catholic church, the hate she said that came with it and the morals she was taught.

“I went to a Catholic elementary school from kindergarten to eighth grade; we had religion class for at least an hour a day, but religion didn’t stay in that class. It integrated into social studies, science and math. There was a lot of authority and no output to express anything,” Nelson said.

Nelson continued to speak about authority and how she questioned it.

“Around most people, I have no problem being who I am. I’m really grateful to feel accepted around the people who mean most to me. However, when I go out and interact with people other than my loved ones, I find that not everyone is accepting of it. I still at times get uncomfortable/scared of the thought of holding a girl’s hand in public.”

“There was this time in Social Studies when we were learning about community — this was around the time when gay marriage was legalized — we were talking about how laws were made and what made something illegal, and I asked why it’s a sin to be gay. She got really tense and said because it’s in the Bible and because it is. I said but if God tells us to love everyone, why is that a sin; at that moment I questioned authority and it just stuck with me because there was no reason, so I was confused,” Nelson said.

Besides religion, many students from DGS have also talked about other sources of their fears: family reasons, friends, society, the current political climate and even multiple responses about self-hate or internalized homophobia.

Junior Kim Thul talks about her experience with coming out and what challenged her.

“I came out to my mom in 8th grade as bisexual; it was emotional because for a lot of my life my parents didn’t want to impose their views on us, so I didn’t know their political standing, I came out to my brother first, and he told me that my parents told him that it would be OK if he was gay because he didn’t show any interest in girls. So I knew they might be OK with [coming out],” Thul said.

“In recent years I have really thought about myself more, and I had to come out again to my family [as lesbian]; I was almost seven months with my girlfriend, and I didn’t want it to come to one year and just surprise them. My dad was a wild card because he always saw me as a little princess but little did he know that little princess also liked princesses, but I worked my courage up and then at first he said are you sure, then it was awkward for a little bit, but now he’s fine, and it just took him some [time] to accept it,” Thul said.

The Blueprint distributed a survey to DGS students, and about 200 people answered the questions, but this was not an ideal sample size. This survey asked students about their pronouns, sexuality and if they are supported in the community. This was a very small sample of students answering but with a little more than half of the respondents answered straight, leaving the other half of the responses ranging from gay to bisexual to pansexual to some simply not knowing what their sexuality is. With a significant amount of the student body make-up consisting of members of the LGBT community, DGS tries to make everyone feel heard and supported by the staff.

Math teacher’s Kara and Jocelyn Painter, who are a married couple, talk about their experience and how they encourage and support others.

“Getting to know your students on every level, getting to know them as a person and who they are outside of school and just [create] a safe environment to just allow them to be themselves,” Painter said.

Jocyln Painter talked about their relationship and how it was handled with the administration.

“Thirteen years ago we started dating, and it did feel a little bit different when it came to being supported, when we first started dating it wasn’t really open and accepting as it is now, I know our situation was handled a little bit differently than other people who announce that they’re engaged; it was definitely handled differently: covering all bases and even asking us ‘oh are you guys serious or this is a joke?’ Which I don’t think they’ve ever asked any other staff member that, because after we told a couple of teachers rumors started to fly and administration had to make sure it was legit, having to be talked too about it which probably hasn’t happened with a straight couple,” Painter said.

Much has changed over the 13 years. The majority of students who responded to the survey said they felt supported in the community when they were expressing their sexuality, but many had issues when it came to their friends or family and looking for a safe space to express themselves.

Math teacher and PRISM founder at DGS Andrew Kaim talks about why the club was founded.

“A lot of people don’t understand bisexuality. The amount of times I’ve heard from people in the community about how they don’t believe bisexuality exists is rather shocking, because we’re definitely here, whether they believe it or not.”

“The PRISM club was started back in 2003, and it was motivated by student interested, it’s a social place for students who are questioning, lesbians, gay, bi, trans or allies where they can talk about what’s on their mind and interact with others who they feel comfortable with. It’s really just a place where students can see that they aren’t alone,” Kaim said.

He also speaks about the struggles that they have had to work around during COVID-19.

“Normally we would meet after school every Monday but right now students are pulled in from school stuff to family things so there hasn’t been a real meeting this year. I think more than anything, students appreciated the in-person aspect and social interaction but meeting on zoom might be difficult,” Kaim said.

Sexuality is not the only thing that many have to deal with, with gender issues or lack of confidence, it can put a strain on someone’s mental health. This is another article talking more about gender.

Junior Ash O’Connor talks about being an open trans-girl.

“In freshman year, I wasn’t out to most of my teachers and most of my teachers would use my dead name [a trans-person’s name before they transitioned] and that was very difficult for me, having to deal with that all day every day and then having to go home thinking I’m invalid, that was really rough for me. Even having to use the bathrooms that I didn’t feel comfortable in was also just a huge thing because whenever I had to go to the bathroom I felt just isolated in a sense.”

O’Connor continues to speak about her personal experience when talking about support from the community.

“At school, I didn’t feel supported, at the time I went to a Christian school so I was always under the impression that everyone would exile me, my family as well because they were religious, but I did find groups online that made me feel safe. I found my first online group through Instagram and even games, and I still talk to some of those people. When I was just starting out transitioning they were there helping me go through the different steps and different names, pronouns and things to make me feel comfortable; it helped me an insane amount, being able to understand myself which made me more confident in myself and let me be more open to my school life,” O’Connor said.

DGS Alum Marina Mancione talks about her experience with growing up in the suburbs and in a Catholic school.

“It was really tough, honestly, I was in a constant battle with myself since I was probably 6 years old. I went to a catholic school for 9 years before DGS, and that was absolutely terrible, I was taught that homosexuality was a sin, and they were constantly pushing all of these norms against us, and I knew that is not what I needed to be myself, I grew up with such intense internalized homophobia, and I would constantly deny who I was. I had constant panic attacks, would resort to unhealthy coping mechanisms, and absolutely hated myself; It was really tough, especially having heterosexual relationships with people who thought it was a phase or I just ‘thought girls were pretty’,” Mancione said.

Mancione continued by talking about the differences she sees now living in San Diego.

“A few reasons,I’m not sure if I’m gonna be accepted by people or not. Secondly, self hate issues. I’m not 100% comfortable with who I am yet.”

“It was crazy to me how much sexuality was normalized in California, especially in San Diego and LA; I felt comfortable for the first time in my life. My boyfriend, Tyler, is so accepting and supportive of my sexuality; there’s a bit of a stigma around heterosexual males finding out a female is LGBTQ+; their first reaction is usually ‘oh that’s hot’ – which is literally the ugliest response an LGBTQ+ girl can get–that might be one of the biggest differences I’ve noticed in California versus the suburbs. People are so much more open and accepting, you’ll usually receive a lot of ‘Oh my God me too!’ responses when you come out here,” Mancione said.

Being open about your sexuality or gender is something that can be hard. But having the confidence to express who you are is often harder. Junior Spencer Fenner talks about being open about his sexuality and what it means to him to show his true self.

“[I feel comfortable with my sexuality] all the time, I am who I am, and you can’t change me. If I’m hanging out with a bunch of people who don’t like me because of my sexuality, I might feel a little uncomfortable, but I still won’t change. [I didn’t express what I wanted to] but that was a long long time ago, I don’t hide anymore, It’s an important part of me. I love being able to live my life how I want to; nobody can stop me from expressing myself,” Fenner said.

He continues to talk about what others can do to express themselves and shed a positive light on these subjects.

“You have to be yourself, it can definitely be scary, start slow and then be more and more fierce, people can judge you, but just brush it off because it’s your true friends who will stay with you when times get hard. [There was this time] when I got to dress like Ariana Grande for Halloween or the time I danced in front of the whole school in the cafe and at hoco, I dressed as her, had the ponytail and the boots and all. I won 2nd prize in the costume contest, and I carried around a microphone/speaker playing Dangerous Woman in the hallways,” Fenner said.