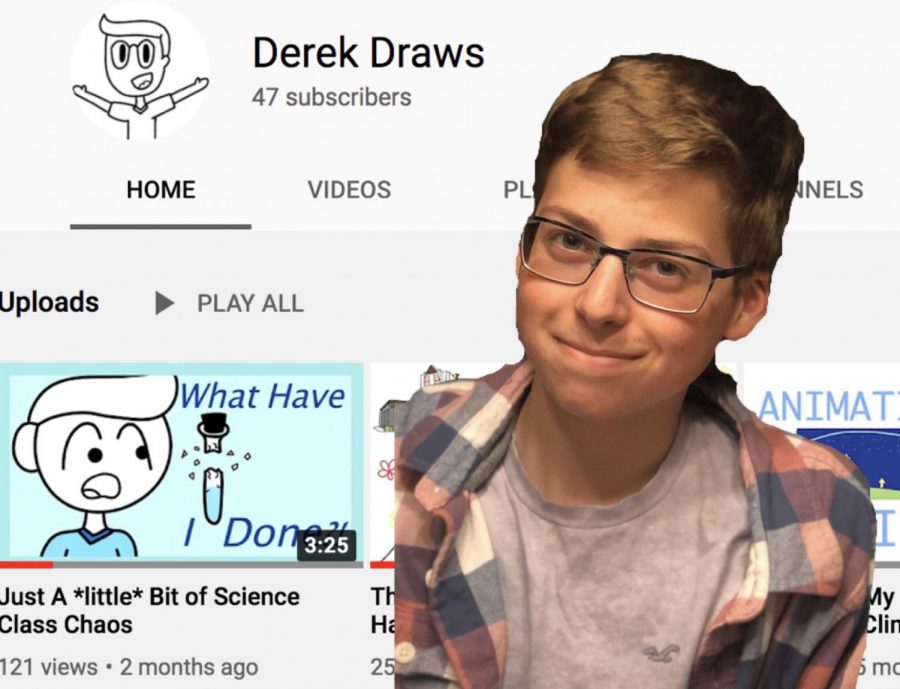 Science class chaos, hell’s itch and Animal Crossing—senior Derek Hoffman’s creative world bubbles with honest, eccentric depictions of his personal passions and experiences. Fusing charismatic intelligence with motivated tenacity, Hoffman finds success fulfilling his interests in engineering, tennis, baking and leadership. Curiosity is the catalyst for his innovations; this is essential to his undermentioned, perhaps most intriguing development.

He’s found an outlet to share this talent with the digital community, too.

Growing up an internet kid, Hoffman has acquired an appreciation of Youtube as a conduit for sharing imaginative content with others who have similar aspirations. Coupled with a love for Pixar and animation, Hoffman decided to create his own Youtube channel, known as “Derek Draws,” in April of this year. Self-narrated, his videos consist of artistic depictions of his life adventures and fascinations in clean, 2D animated visual packages.

“As a kid I was enamored by Disney movies, specifically Pixar, and how they could use animation to bring characters and stories to life. I wanted a chance to do something just like that…I got the idea to start my channel because I needed a way to easily share my videos with my family and friends,” Hoffman said.

He finds crafting his videos to be an intricate, yet highly rewarding process.

“Making an animation is a very time-consuming activity that at times can be very repetitive and tedious, but I love every aspect of it. It starts with me coming up with an idea and writing a script surrounding a story or topic I want to talk about; I then edit the script and record myself saying it so that I can base my visuals around what I’m specifically saying,” Hoffman said.

Continuing, he describes the extensive process of drafting an animation storyboard to bring his script to life on-screen: “Before I start animating, I usually make a storyboard in my sketchbook so I have a better idea of what to draw and how to best convey my story… I really enjoy making [animations] but it can take a lot out of you. Each frame is just the same as the last, with a small adjustment or two that over the course of a dozen or so frames creates the movement you want.”

From Animal Crossing to physics finals to hell’s itch sunburns, Hoffman has shared a variety of amusing animated stories with his audience. His favorite video details an incident he endured during a lab assignment in his chemistry class sophomore year.

“In the video, I explain how for the first lab of the year, I wanted to do well and have a great first impression on my teacher to show I was a good student and I wanted to learn. When my group started the reaction in the test tube, I panicked and put my thumb over the opening; as the reaction continued, gas pressure built up, and with nowhere to go, shattered the tube, sending glass everywhere… including onto my lab partner. I thought I had utterly failed my goal of having a good first impression but my teacher was really cool about it and it ended up being a running joke the whole year,” Hoffman said.

As for what he learned from this experience: “I really like this story because while I tried so hard to be perfect in order to do well in the class and get along with my teacher, my failure to do so ended up helping me learn that things are going to work out just fine on their own.”

DGS fine arts teacher Katherine O’Truk has taught Hoffman in numerous art classes and is currently instructing him in Painting 2. Referencing his growth as an artist and individual, O’Truk is appreciative of his ability to progress through obstacles and learn from them.

“Derek can be hard on himself and if we are focused on realism for a project he can be stressed if his work isn’t perfect. I think, however, that he’s overcome this and has been able to focus more on the fun and experimentation of painting this semester. I do think that his drive for success has helped him to learn at a more accelerated rate than a lot of students,” O’Truk said.

O’Truk recognizes Hoffman’s versatile approach to artistry and conscientious dedication to his projects.

“Derek always comes up with new, creative ideas and he’s interested in so many different creative pathways. I think he sets a good example for other students; he’s always on task and doing what he needs to do. Personally, I have fun talking with Derek and hearing his ideas, so he makes my day better,” O’Truk said.

Derek always comes up with new, creative ideas and he’s interested in so many different creative pathways.”

Hoffman agrees he’s matured in his work process through his guidance from O’Truk, specifically in regards to confidence.

“Confidence is something [O’Truk] taught me because I tend to be very critical of my work, and it sometimes is hard not to be with so many amazing artists online or even in the classroom next to me. She always gives good honest feedback, explaining how to fix something or making sure it’s known when you do something well. I appreciate this and it helps me see what I create from an outside perspective,” Hoffman said.

“When Derek was about four years old, I noticed him adding details to a drawing that surprised me—including motion lines behind a ball or wavy lines above something to convey heat or an odor. I had never thought to add elements like that at any age, let alone as a preschooler,” Lori Hoffman said.

An active supporter of her son’s artistic endeavors, she continually provides resources that allow him to further explore his interests.

“Birthday and Christmas gifts for Derek have always included something related to art. It started with large boxes of crayons and art kits when he was little, to most recently, his animation tablet and software. Also, during grade school I signed him up for various art-related summer programs, whenever possible…I have been lucky to watch the process of him creating each of his YouTube videos,” Lori Hoffman said.

Elaborating on the Youtube publication process, she explains what she finds most notable concerning her son’s creative technique: “Derek’s overall storytelling ability through [the Youtube] medium impresses me; the way he works through the whole process… from development and recording of the narration, deciding how and what to convey in a scene, adding details to express emotion, incorporating a new technique he’s learned and putting it all together into a tidy, amusing package. It takes creativity and dedication to do his craft.”

As a self-directed creator, Hoffman reveals his motivation behind posting on his Youtube channel.

“I don’t post videos for the sole intention of hoping a bunch of people watch them, but I do love seeing the view count go up because it is cool to know someone took the time to watch my videos. I really want to keep posting to be able to look back and see my own growth and prove to myself that I can be a good artist and animator. If I can entertain and bring a smile to someone’s face in the process, that’s even better,” Hoffman said.

Lifelong friend and senior Matthew Jablonski is one viewer that fulfills Hoffman’s aforementioned desire to entertain through an unfiltered lens.

“I’ve known Derek for 11 years. Derek has always been artistic, but recently he has definitely embraced that side of him more, and it is really cool to see that comfortability with his style and thought process when it comes to art development…I love the channel because it is extremely creative and genuine to who Derek is as a person,” Jablonski said.

“The thing I love about the videos is definitely the honesty in the storytelling; it really helps people get to know Derek personally. I am always amazed at the animation and the flow of the storytelling. The passion that he has for animation inspires me to pursue creative goals of mine,” Jablonski said.

I love the channel because it is extremely creative and genuine to who Derek is as a person.”

Hoffman is intent on continuing his education at a four year university. While his prospective goal is to study industrial engineering, he plans on continuing his passion for art and growing his channel after high school.

“With a degree in engineering, I feel like I will have a lot of open doors to choose from… because engineering involves problem-solving, I will be able to utilize my creativity in new ways. In no way does any of this mean I’ll stop animating; art will always be a part of my life and even if I don’t get professional instruction, it doesn’t mean I can’t grow and develop as an artist,” Hoffman said.

Reflecting on his artistic journey, Hoffman emphasizes that “finding a variety of interests to spend your time doing to relieve stress or cultivate creativity is so valuable and oftentimes very under appreciated. That’s one reason why I like art as much as I do, despite my other interests. Math and science can be interesting to learn about in one aspect, but just spending time creating or crafting can be equally or more stimulating but in a completely different sense.”

While his future is still undecided, Hoffman is confident he will remain committed to his animation efforts.

“I have no idea what the future holds for me with animation… for now, I will keep learning new things and work to be proud of what I make and share on the internet,” Hoffman said.