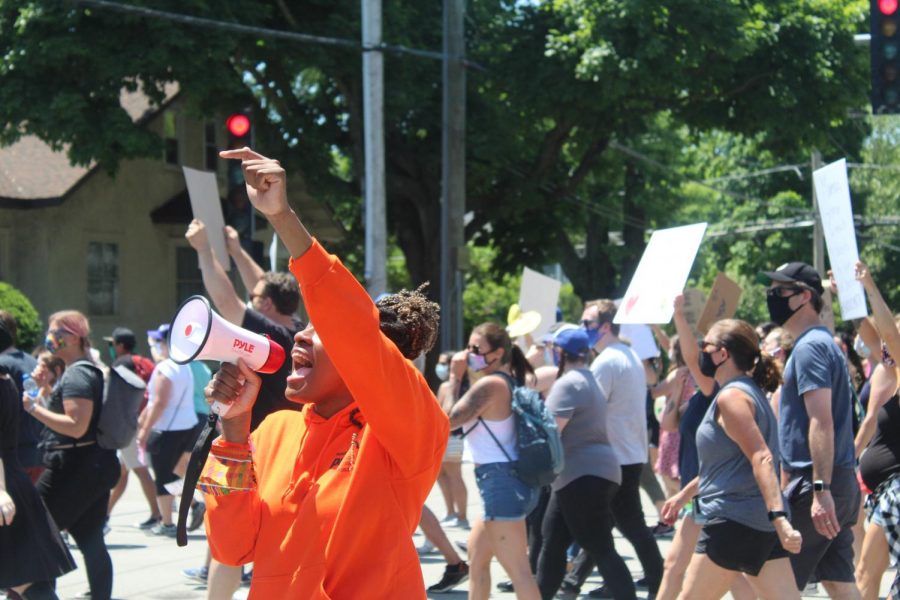 This was taken by @wardup.photos in March in Downers Grove, IL.

Letter to the editor: Part I from former DGS students

Since 2015, Community High School District 99 has been flagged by the state for being within the top 20% in regards to the racial gap within its disciplinary actions. To put it simply, students of color are much more likely to be punished at school than their white counterparts.

To address the high recidivism rates, Dr. Karen Taylor and Kelly Zuerner introduced the PATH initiative for the 2020-2021 school year.

This initiative works to provide restorative practices to students charged with an out of school suspension of three or more days. The student would receive counseling and resources to work on their social and emotional skills to prevent the action from happening again.

This program may help address the number of out of school suspensions the district hands out as the program works to lower recidivism rates. It’s a responsible and great step towards progress.

However, this program does not address the issue of the disproportionate rates at which all punishments and arrests target Black, Latinx and Indigineous students. It is also completely undermined by other practices present on both campuses.

DGS participates in a technique known as proactive policing. This belief is that the presence of police or other authority figures stops the crimes from occurring and mitigates harm from crime when it does occur.

This is why DGS over the last 5 years has added many security staff in addition to the hallway monitoring done by faculty members designated as student supervisors.

Many people felt like these were necessary steps to take after the Marjory Stoneman Douglas High School shooting in Parkland, Florida and other such tragedies. The thought process being that security and an armed officer will be able to protect the school from outside threats.

However, the data proving this is highly contestable or non-existent. And this technique can often negatively affect students of color.

According to an FBI study of mass shootings in the US from 2000-2013, a majority, 56%, of mass shootings ended by the shooters initiative, often either by suicide or by fleeing the scene. Almost 70% ended within only five minutes. And 36% ended in under two minutes.

Of shootings which took place on high school campuses, almost all were ended because of the response of school employees who were already at the scene, not officers.

According to Marx Schindler, head of the Justice Policy Institute, there is no evidence that the expansion of law enforcement in schools actually makes for safer school environments.

The grim and scary reality is that school shootings are a tragedy that happen way too often in the US. However, the increasing security enforcement on campus is unlikely to actually have an effect on the outcome if a shooter were to be on campus.

Does this mean that there is no hope in preventing mass shootings from occurring? Of course not. It simply means that we need to, as a community and as a nation, divert more resources in effective gun control and evidence-based policy reforms.

Not doing this and putting resources into security theater reforms can have real effects on students of color.

In fact even when controlling for factors like poverty, schools with School Resource Officers are five times more likely to arrest students for disorderly conduct than school than those without them. In other words when law enforcement is present, students are more likely to be punished with legal consequences and a permanent record in situations that can be dealt with without such extremes.

It is too early to see if this trend will play out at our schools with new additions to our faculty. But the fact remains that even if it doesn’t currently, we need to consider the continuance of the policy with future staff who might fulfill the position.

However, our school already has historically arrested Black and Latinx students disproportionately.

Even without the intentional arrest of students, the school has disproportionately punished students of color at every level of discipline, although the racial discipline gap does widen with the increase in the severity of the punishment from detention to suspension to expulsion or arrest.

Drug use is common within our district across all racial categories and if the school wishes to address it, it should treat it like a public health issue that requires the attention of specialized staff and proper education about drug use in health classes.

Instead students are getting punishments for drug use and possession ranging from detentions to arrests, the severity of this being associated with one’s race.

This is likely due to the fact that most punishments given are done with rules that are neither clear nor constant and decided on a case-by-case basis by the almost uniformly white faculty and staff, which even with best intention most likely exhibits real inherent bias that is affecting who they see as being “dangerous” or “problem children” versus those who are worthy of reform.

Having random drug searches done by police using drug-sniffing dogs and arresting students in front of their peers breaks any trust built between students and faculty. Being questioned by a security officer who periodically checks the bathrooms every hour is invasive of students’ privacy. Being arrested for getting into a physical altercation on school property breaks any chance the school has of reforming student behavior by promoting de escalation tactics and positive social behavior.

And the Black and Latinx who are getting arrested and are being punished on the regular are then being funnelled into the school-to-prison pipeline which is the process in which students, especially Black and Latinx, across the nation being are pushed out of the school system and into the prison system through the social pressures of being constantly targeted and punished for what are often minor behavioral issues.

Security officers are not trained to deal with such issues and will instead resort to detentions and suspensions as a way to curb the behavior, which is ineffective.

No one is questioning why students are resorting to drug use or violence as a way to work through their problems. The way to combat that is to stop relying on punishments and start focusing on developing students’ social and emotional skills to take a proactive stance in preventing future issues and building positive school environments in which all students can succeed.

Except for in the most extreme cases, non-punitive intervention should be where the school devotes most of its resources for behavioral correction, whether in drug and alcohol use or fighting.

However, expecting one restorative justice coordinator who only sees first-offenders getting out-of-school suspensions of three or more days only addresses a fraction of students who are being punished regularly and simply isn’t enough.

Many of our security staff are great people who care about and connect with the students. After all they are some of the only people of color (POC) adults in the district that students regularly interact with. POC kids need role models to understand their issues on a more personal level which the uniformly white teaching staff can not be.

However, it is in their job description to enforce harmful policy.

We need to transition their jobs from enforcement to intervention. If the district is worried about ensuring job security for these valued community members then they should provide training for the new obligations that this transition might entail.

We need to transition our resources from punitive to positive and add specific policy reform to create clear and consistent guidelines regarding violence.

Further, while making these new policies, students’ rights should at all times be protected. All people in Illinois have a right to use reasonable force when confronted with immediate threats. This right to self-defense must also be respected by our school, as currently any use of force by students is a punishable offense.

The fact is that Black students are often more aware of the racial bias in the school system than many of their peers. And lack of institutional trust regarding race is a pretty good indicator of both the future discipline infractions and the college enrollment of Black students in America. However, DGS has given its Black students very little reason to trust our school system.

Committing to racial justice means recognizing that our school district has a very serious problem.

The inherent bias present in our punitive system has real consequences and not recognizing that is affecting the course of so many lives. Lives that matter. Black lives that matter.