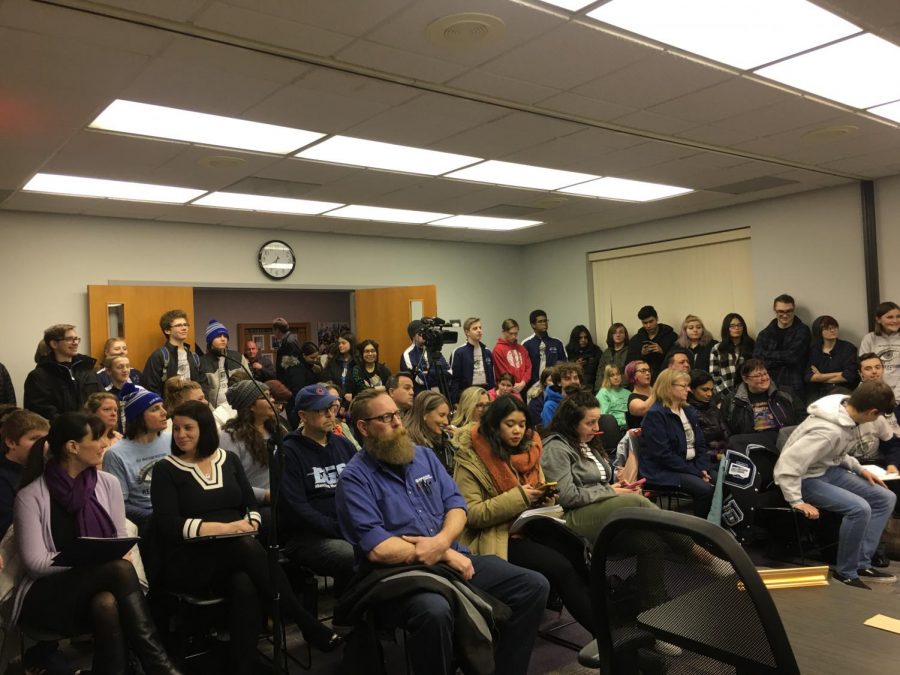 30 students and parents spoke for a period extending two hours on Brooks’s behalf at the meeting on Feb. 24, 2020.

Students attend board meeting in support of band director

Amid the speculation of band director DaJuan Brooks’s contract facing non-renewal for next school year, more than 3,000 people signed a petition, and over 40 were present at Monday’s District 99 Board of Education meeting, in support of renewing Brooks’s contract.

Thirty students and parents spoke for a two-hour period on Brooks’s behalf at the Feb. 24 meeting. In response to Brooks’s contract speculation, numerous students spoke in support of Brooks as a teacher. Junior and head drum major Alaina Garcia presented to the board her experience with Brooks and how he has led the marching band to success.

“There is seriously no way to summarize such a phenomenal and brilliant teacher — and person. Because of the way Mr. Brooks believed in me, I started believing in myself,” Garcia said.

According to superintendent Dr. Hank Thiele, all teachers who are not tenured are evaluated and annually voted on to have his or her contract renewed. This contract renewal or non-renewal will take place for all non-tenured teachers in a closed session at the board meeting on March 16, 2020.

“The process is the same for all of our non-tenured staff members. They are meeting with the administration right now, heading into the end of this evaluation cycle. Then, over the next two school board meetings, we will discuss all of the staff members with the board,” Dr. Thiele said.

In contrast to the support shown for Brooks at the Feb. 24 meeting, some students in the music program believe there are negatives to his teaching style and how it fits into the culture of the DGS band program.

However, only support was shown for Brooks at the meeting. Band parent Ruthilah Bodley said Brooks shows support for her child and her family.

Principal Edward Schwartz was present at the board meeting and provided a statement regarding the contract renewal.

“Although we cannot comment on Mr. Brooks specifically, we can share that all new teachers are evaluated based on their planning, instructional practices, relations with students, and professionalism. Individual students or parents may see a portion of each of these, or none at all, in their interactions with a teacher. All of these factors, along with other employee performance measures, are used by the administration to determine if teachers in their first four years are brought back for the next year,” Schwartz said.

Junior Nathaniel Bloom spoke about Brooks and the culture he has provided the band.

“Home is wherever Mr. Brooks is,” Bloom said.

School board president Nancy Kupka said she was impressed by the articulated support of Brooks but that all perspectives must be considered in the district’s choice of whether or not to renew his contract.

“This is a very difficult decision. No decision has been made, but [the board] will continue to listen to what people have to say about the situation and at the end of the day, we are pledged to take the best interests of the students at heart for the decision we make,” Kupka said.

In response to the board meeting, Schwartz said, “It is always a source of pride for me to see students appropriately advocate for themselves and/or for what they believe in.”

Brooks comes to Mustang Country; a noteworthy addition to the DGS staff