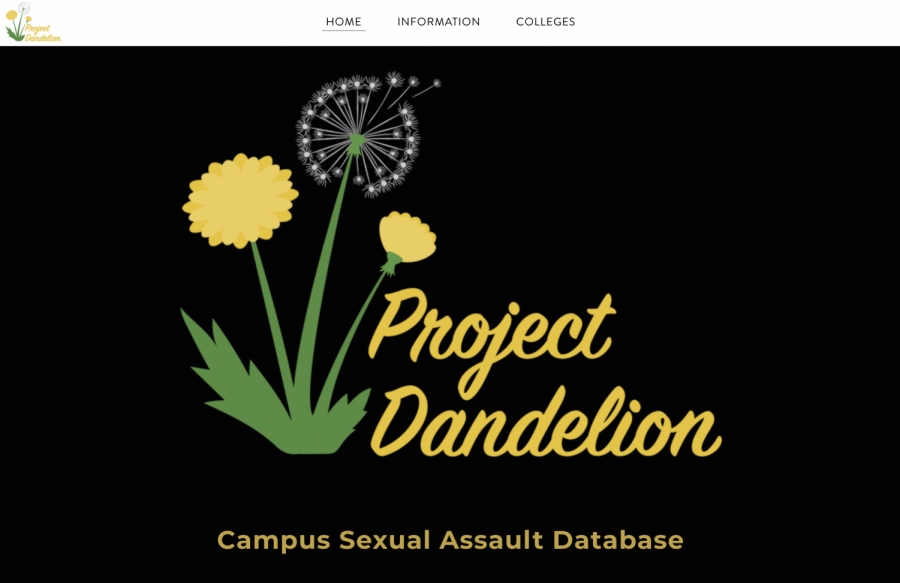 A screenshot of the Project Dandelion database, which currently operates under a weebly website.

As high school students undergo the extensive college admissions process, universities make it very clear what they want to see from their applicant pool. Required SAT and ACT scores, average admitted GPAs and Common App essay prompts are all accessible with a simple internet search. But there is something unclear that students want from universities, something not as easily found online: transparent information on sexual assault incidents and harassment on campuses.

That is, until DGS senior Therese Malinowski launched an online database to change that.

Known as Project Dandelion, this non-profit foundation is committed to providing prospective college students with up-to-date and easily accessible sexual assault statistics on over 170 Illinois colleges and universities.

Malinowski’s passion for promoting safer school environments derives from her middle school years after learning of a sexual assault incident that affected the life of a close friend. From this point on, she expressed interest in pursuing an advocacy campaign, and her Girl Scout troop’s Gold Award project provided an avenue for her to do so.

“I had the original idea six months before the Gold Award project actually got started… I used that phase to research and get a team, which was the best set-up I could have asked for. From there, it took the entire summer plus the first couple months of the school year into November to get all the research done because there’s just a lot to do when it’s a database on that scale,” Malinowski said.

The Project Dandelion website credits a founding team made up of both high school students and organizations that played a role in the development of the database. Malinowski details the process she took in selecting potential founding team members.

“For the founding team, I wanted to get the people I knew that were closest to me and that were the most interested in this topic, because I have a lot of friends that are very passionate about it too and are actively trying to do sexual assault advocacy issues, and I thought those would be the right people to initially get it going,” Malinowski said.

One of these friends, junior Diana Kwak, explains her reaction to being approached with the concept of Project Dandelion.

“[Malinowski] came to me and the rest of the team last spring asking if we’d like to help out with her Girl Scout Gold Award project… I remember being excited to be a part of her project and determined to make a difference. I didn’t know very much about the issue of campus sexual violence until Project Dandelion, which I think is a testament to how important it is that we continue to bring campus safety into the light, especially for prospective college students,” Kwak said.

As a member of both the founding and research teams, Kwak describes the typical responsibilities she upheld during the initial research phase of the project.

“As a researcher, I teamed up with over 20 other friends to tackle the huge task of collecting [sexual assault statistics] on every college in Illinois. We met after school a few times during the fall to divide and conquer. We compiled all our findings on each school’s policies, history and resources into one document, which Therese then added to the database,” Kwak said.

The Project Dandelion research team’s staff sponsor is DGS social studies teacher Laura Rodey. Malinowski was a former student in Rodey’s law class and reached out to her to become part of the project.

“[Malinowski] contacted me earlier this year explaining the project and asked me to ‘supervise’ her team when they met after school to get the legwork done. I was happy to do so. Sexual assault is a hugely important issue in society, so anything we can do to help students access resources and help ensure colleges are held accountable for helping students is great,” Rodey said.

She continues, stating, “What is amazing about this project is that it was completely student-generated and student-driven. Students all over the school are passionate about issues, but a smaller group really engages in political action. I really admire [Malinowski’s] idea, motivation, and advocacy.”

“In my personal safety class junior year, [Bhatia] came to our class to talk about healthy relationships. I asked my teacher for her contact and I then asked her if she wanted to be a mentor for the project because we needed someone professional,” Malinowski said.

After getting in touch with Malinowski, Bhatia was on board to oversee the project and understood its importance and uniqueness.

“My initial reaction was excitement… The project sounded enticing and it was a really intentional way to educate students about safety on campus. [But] this project was an enormous undertaking because it had no template and no state had ever completed a database like this before. Nevertheless, I believed that this project would be so important for prospective and current college students,” Bhatia said.

No state had ever completed a database like this before.”

“[Malinowski] is an exceptional leader. She was able to recruit and lead a large team of researchers, set deadlines and accomplish a tremendous goal in under a year… she was an absolute pleasure to work with and watching her idea flourish into Project Dandelion has been an honor to be a part of,” Bhatia said.

Although thought of as a mentor, Bhatia stresses that the working relationship she shared with Malinowski operated as an equal partnership.

“While I served under a mentor capacity, [Malinowski] and I worked more as a partnership. When she encountered some barriers or needed a professional opinion, I would step in and help her navigate around those or offer some guidance. Additionally, I offered her direction on how to pass off the project to an entity with more resources so that it could continue to grow and flourish,” Bhatia said.

The entity Bhatia is referring to is the Illinois Coalition Against Sexual Assault, known as the ICASA. Malinowski explains how the idea to associate Project Dandelion with the ICASA was brought up during a meeting.

“I met with Bhatia at a Starbucks, and I asked her about making the project sustainable. She said, ‘There’s a kind of partner company we have [the ICASA] and if you email them, they might help you out.’ So I did, and it worked out, fortunately,” Malinowski said.

After communicating with the ICASA, Malinowski made the executive decision to pass the development of Project Dandelion to the organization, knowing it was in the project’s best interest.

“As a normal civilian, there’s actually a lot of information I don’t have access to, which was a big barrier in this project. However, every single college is required to publish an annual fire and safety report, which includes all of their ‘accepted’ sexual assault records,” Malinowski said.

She continued, stating, “Some information isn’t entirely accurate because a college could literally tell a student, ‘you’re allegation doesn’t have enough ground to stand on, so we are not going to count it.’ But because I’m just a civilian, I don’t have access to [those situations], so I passed it on to the ICASA with the hope that they could go into a little more depth about cases with the colleges,” Malinowski said.

Project Dandelion has been met with success in the Chicagoland area and Malinowski has been interviewed by a variety of news networks about the database.

“The first company that contacted me was ABC 7, and they just said, ‘We can be at your house in half an hour if that’s okay.’ They just showed up and that interview’s online. There’s a WBBM one as well, and then a bunch of local newspapers picked it up,” Malinowski said.

Malinowski credits the media attention to the substantial boost of traffic the Project Dandelion website has recently received.

Malinowski hopes the newfound exposure of Project Dandelion will inform and empower students to make educated decisions concerning their future academic environment. The relationship between this empowerment and the symbolism of the dandelion is emphasized by Malinowski.

“Dandelions have always been a symbol of resilience and strength in my life because these flowers will grow in concrete and be totally okay, and I wanted to give other people that empowerment,” Malinowski said.

The significance of the dandelion symbol relates to the future viability of the project as well.

“I hope that [the ICASA] is going to expand the database to provide information on every school in the country, and I hope that students nationwide start using this resource. This is information that I think a lot of people want to have but just have a hard time accessing. But also as a response to students starting to demand better sexual assault information, I’d like colleges to start responding to that and doing whatever they can to create safer environments,” Malinowski said.

Malinowski relates her research to her personal college admissions process.

“I’m going to Purdue… they had a kind of unique case going on recently where they were very against an attacker, actually, instead of gaining up on the victim. I felt safe on campus when I went there, and it just seemed like everyone who I talked to about safety on campus was really receptive to that,” Malinowski said.

As for her personal reflection on the project: “I feel empowered that if something does go wrong or I know somebody who’s a victim [of sexual assault], I can totally stand up for them. I’m ready to fight,” Malinowski said.

She hopes that you are too.