Multilingual and multitalented: Benefits of speaking more than one language 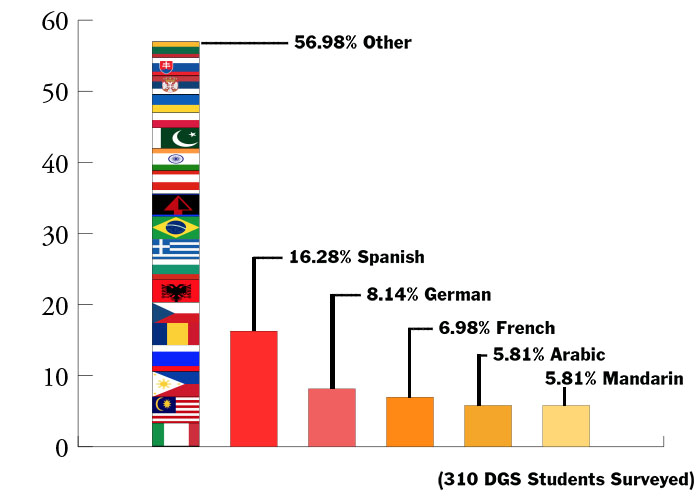 According to a US Census survey from 2011, 60.6 million, or 21%, of Americans speak a language other than English in their homes, a statement which is true for many DGS students. However, despite the growing prevalence of bilingualism and multilingualism in America, the benefits can often be overlooked.
Senior Frosina Kostadinova’s roots lie in North Macedonia, but her language abilities extend far beyond one non-English tongue. Kostadinova speaks six languages: English, Macedonian, Serbian, Bulgarian, German and Korean. She explained that one of the biggest benefits to knowing so many languages is the amount of diverse friendships she has.
“I’ve made a lot of friends in other countries, and I think it’s really interesting to learn about more cultures,” Kostadinova said.
Senior Hewane Melkie speaks the Ethiopian language of Amharic in addition to English and believes that the benefits of being multilingual are quite profound.
“[Being bilingual] has given me more of a grasp on multiple perspectives. American ideology, for the most part, is very ‘freedom,’ and for the most part liberal. We believe in independence, but Ethiopian culture is very traditional and [grounded in] what’s ‘right.’ There’s no such thing as a right or wrong version: there’s just an expected way,” Melkie said.
Social studies teacher Elaine Marinakos is the daughter of two Greek immigrants and is fluent in both Greek and English. She expressed that, despite her first exposure to language being Greek, she had little difficulties when learning English.
“I went into kindergarten as an ESL student. Greek was the primary language spoken in our home, and we had just spent the entire summer in Greece prior to my starting school, so my exposure to English was limited. I was a fast learner and was back in the regular classroom within a month,” Marinakos said.
Despite her attempts to instill the value of their language and culture in her children, Marinakos’s three children do not possess the same skills with the language as she did when she was their age.
“With my eldest son, we were very good at speaking to him only in Greek as a baby, but eventually he went to school and English became his primary language and the language he chose to use with his siblings. All three kids went to Greek school for a few years, and they have a basic understanding of Greek, but speaking is a bit more challenging for the two younger ones,” Marinakos said.
In addition to students’ fascination with her speaking Amharic, Melkie noted that her culture is also often fantasized, rather than understood, which does have an impact on her life.
She shared the importance of monolingual English-speakers being tolerant and not glorifying other cultures, and noted that such glorification often has harmful effects on those whose culture is being idolized.
“For students just be mindful of how you react to things, and be mindful of where your surprise is coming from [when learning about other cultures]. Be mindful of how that surprise comes out and how it is perceived,” Melkie said.