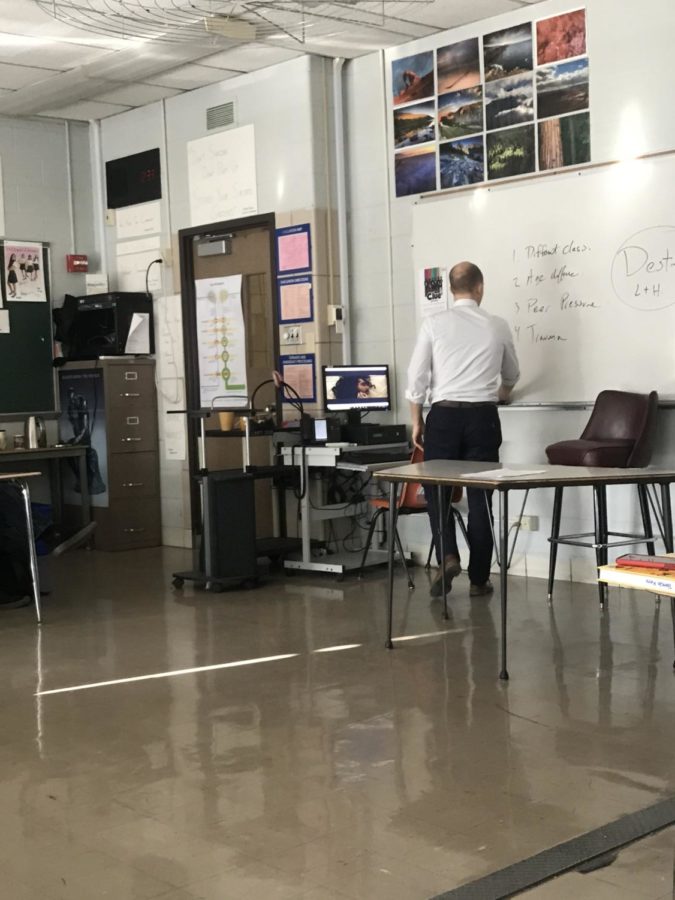 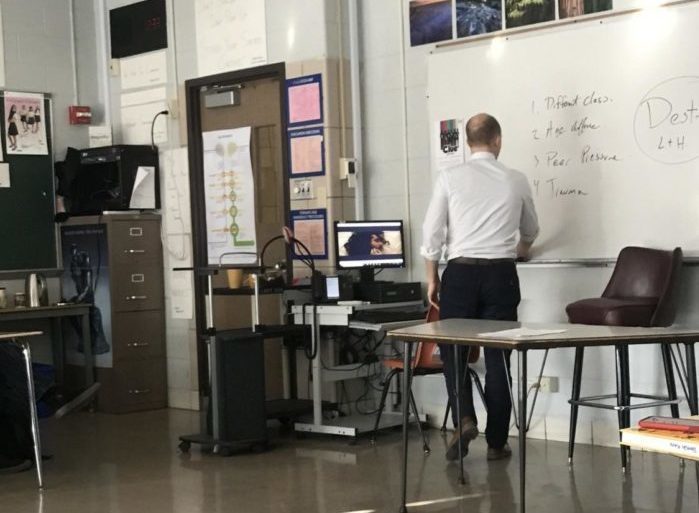 As part of the DGS staff for 13 years, English teacher Trevor Parker has left his mark not only at the school, but in the hearts of his students. One of Parker’s main goals within the classroom is to provide an atmosphere and space where students feel empowered to share their different ideologies and emotions.

His career wasn’t always easy though, it wasn’t until five years ago when he had a breakthrough that developed the teaching skills he portrays to his classes today.

Parker said that five years ago he felt “burned out” and had an epiphany over the summer where he wanted to make English class about more than just the content. He began to invest more time into discovering students identities and learning about who they are outside of the classroom. Teaching lessons that extended father than the classroom sustained him and made school so much more exciting to be apart of.

He has created a course for his students where they can not only further grow as writers, but as people. His goal is to not create a divide between students personal experiences within the classroom, but instead to take those experiences and allow students to share what really matters and resonates with them. Parker wants students to gain growth that encourages the highs and lows of life to help them further understand who they are.

Senior Oliv Yesker recalls having Parker as her teacher sophomore year for English II honors. As she looks back she realizes she learned more about herself than she had ever thought possible.

“I always left the class feeling like I gained something. His class is the class I learned the most from and not just about basic education, but about myself and who I am,” Yesker said.

One piece from his curriculum that students have carried with them is his Monday routine. Students reminisce on how his holistic teaching style of weekend shares and his contribution of a ‘Thought for the Week’ has followed them throughout their English careers. It made students feel as if their life outside of school could matter inside of school and contribute to their education.

Senior Ana Grogan remembers how being able to show vulnerability in a classroom amongst peers helped them be able to connect and become a community. This was different than any other English teacher she had previously and it created an atmosphere that helped her feel comfortable.

“The atmosphere he created was really loving and a good community. I remember on Mondays he would ask us what we did over the weekend and sometimes we would just spend the whole period just talking about what we did. It really helped us feel closer as a class,” Grogan said.

While students appreciated the raw and sentimental aspects of the class, there was still an understanding that sharing alone wouldn’t get you an A. Parker touched on how he wants students go deeper beyond the text of what they’re analyzing and break out of their own mindset to gain insight into diverse perspectives. This takes you out of an analytical sense, but prompts you to try and think outside of a dualistic mindset.

“Easy answers are rarely good ones, so if you haven’t had to wrestle with either the text or something inside of yourself then you’re probably looking at the world in a very dualistic way, in a very this or that way, and I find that as human beings is rarely how it is,” Parker said.

Senior Thomas Woods found that having Parker as a teacher benefited him not only educationally, but personally as well. While it was a rigorous course it allowed him to prepare for harder more intense courses and elevate his writing.

“It was one of the hardest classes I’ve ever taken in school, but he was so available and had such clear directions so if I ever had a project there was always clear feedback on how to improve. It helped improve my writing a lot, especially going into an AP course the next year,” Woods said.

Parker hopes that as students’ advance and develop they look back on his class and think less of the books they read or the papers they wrote and more on what they took away from each lesson. He hopes that within the four walls of a classroom students are allowed to find themselves and discover that their voice matters. As he and his students grow together, he hopes that they continue on in life and never stop developing their narrative.

“In my class I hope that students begin to know ‘oh i can do this’ or ‘my voice does matter’ or any of that stuff. It’s not about remembering me or the class or the content or the book we were talking about or any of that, but did you become more yourself in this atmosphere. That is what I hope for all of us, myself included,” Parker said.