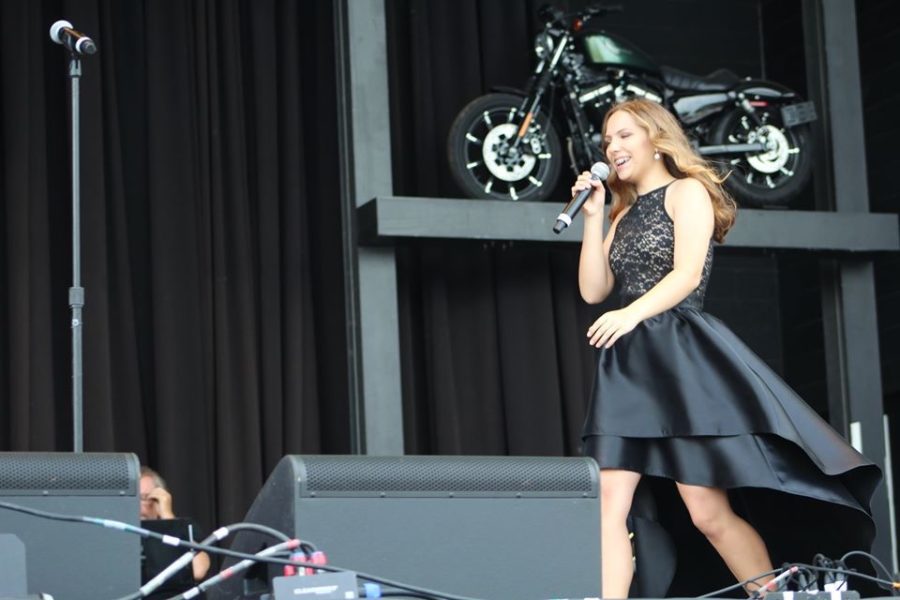 “Memory, all alone in the moonlight // I can smile at the old days.”

These words from “Memory,” a song in Andrew Lloyd Weber’s acclaimed Broadway musical “Cats,” is the lyric that encapsulates senior Agne Giedraityte’s reflections on her musical accomplishments in her younger years. As a renowned 18-year-old singer, Giedraityte is known for numerous achievements, including performing on “The Steve Harvey Show,” recording three albums and gracing the stage of Carnegie Hall.

Giedraityte discovered her passion for singing at a young age when she first listened to the Broadway album “Cats.” She recalls the moment she heard the album with fondness and laughter.

“When I was eight, I was listening to this Broadway album and I would imitate the singers, but I was really shy… I would hide and try to imitate them, but my mom would hear me through all the walls in our house, so I guess I was too loud,” Giedraityte said.

Her mother, Sandra Giedraityte, was amazed by what she heard.

“[Agne] started singing ‘Memory’ from the musical nonstop at home. She was quite good at it and I realized her talent in singing,” Sandra Giedraityte said.

With this newly-realized talent emerging, her mother enrolled her in voice lessons.

“I was classically trained, meaning I started with classical music and Broadway stuff with classical technique. Learning that as a young kid was a little much, and as I grew I had to change lots of voice teachers and stuff like that to find a good fit. Now I am pretty happy with my technique,” Agne Giedraityte said.

Describing the beginning of her career as a “whirlwind” experience, Agne Giedraityte details the support she received from the Lithuanian community, especially in the Chicagoland area, that helped her to pursue her dream.

“Right when I started singing, my voice teacher was a part of a competition in the Lithuanian community, so I went to that competition, and I got to know a lot of people, and slowly I went to more local areas and competitions, and I gained connections… I recorded a CD when I was like 10 or 11 with the support of the Lithuanian community. It attracted attention and people wanted to see me perform, and I guess that’s the start of it and how it snowballed into this career I have now,” Agne Giedraityte said.

Her progressing talent and passion for singing became a family affair. When asked about her greatest support system in life, Agne Giedraityte did not hesitate in her response: her mom.

“She’s basically my momager. She has always supported me ever since I started and she would find me competitions in local areas and so on… Now I perform places and travel and she is always there with me,” Agne Giedraityte said.

As a “momager,” Sandra Giedraityte describes her role in her daughter’s musical career.

“Mainly I’m taking care of all her concert booking affairs and making sure it doesn’t interfere with her school schedule and other inquiries,” Sandra Giedraityte said.

She addresses how grateful she is to experience her daughter’s accomplishments alongside her.

“It’s a great pleasure to see her grow as an artist from up close and I support her every step she takes,” Sandra Giedraityte said.

One of the largest and most prominent steps Agne Giedraityte took in securing her status as a respected performer was gracing a Carnegie Hall stage at the young age of 12. Looking back on the opportunity, she describes the process she underwent in order to perform at the renowned New York concert venue.

“There was a competition called ‘American Protégé’ where you submit two videos of yourself performing, and I won two categories in my age group at the time: Broadway and Classical singing. That won me the chance to go to New York and perform at Carnegie Hall. There were a lot of other young musicians and I was kind of intimidated, but the overall experience was wonderful,” Giedraityte said.

Giedraityte has more accolades to her name in addition to “American Protégé.” Awarded to her in 2018, Giedraityte recounts her experience earning recognition from the Indie Music Channel for her work on her most recent album, “Merry Christmas From My Heart.” 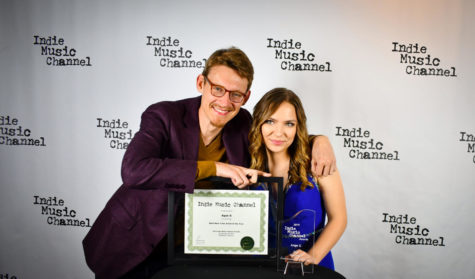 “I was participating in this thing called Indie Music Channel, where you submit a recording or an album and it’s all with independent artists to help them grow. I submitted a few recordings [from the album ‘Merry Christmas From My Heart’] and they picked some of them out as nominations, and then I went to LA and I got ‘Best Teen Artist of the Year’ and ‘Best New Artist of the Year,’” Giedraityte said.

“Merry Christmas From My Heart,” released in 2018, is Giedraityte’s favorite album to date. She shares the challenging, yet gratifying process she endured in recording the album.

“We had booked twelve hours each day for three days in an LA studio, so it was really intense. We had to record the whole album in three days. I was exhausted, I was always tired, especially because my producer [KC Daugirdas] is a perfectionist… In the end, it was really worth it,” Giedraityte said.

As for her favorite song on the album: “One song that’s really cool is this more ‘poppy’ song. It’s called ‘Give Me Your Hand,’ but it’s in Lithuanian [‘Duok Man Savo Ranką’]. It’s by a poet that I know really well named Sandra Avižienytė, the words are by her, and then KC himself wrote the music,” Giedraityte said.

Giedraityte not only performs on stage, but on screen as well. She details her memorable, “hilarious” experience on “The Steve Harvey Show” when she was ten years old.

“I got this message [on YouTube] where it’s like, ‘we saw your videos…’ It was very casual and it seemed like spam and at the end it was signed, ‘The Steve Harvey Show.’ My mom, who’s the momager, was like ‘Okay, let’s see what this is.’ They actually confirmed with a phone call and everything that they were not spam,” Giedraityte said.

She continued, stating, “I was ten, so I was a pipsqueak. I was really awkward, too, and he was hilarious. I sang a song there, and there were judges, and I remember getting second place.”

As a senior at DGS, Giedraityte is able to stay connected to the school community through her passion for music and the arts.

“I’m in choir and that’s definitely a huge part of feeling community, and in the music department of DGS I’m a part of Madrigals as well, which is really special and fun. Also, I’m in jazz band, which has really opened up my musical knowledge, especially with piano and learning how to improvise and kind of let loose of ‘classical chains’ and venture out,” Giedraityte said.

One friend Giedraityte has made through A Capella choir is DGS alumnus Matt Burrows. Originally meeting her when he was a junior and she was a freshman, Burrows graduated from DGS two years ago and still keeps in touch with Giedraityte. Burrows explains what it feels like to have gone to school and performed with someone as musically accomplished as her.

“It’s really cool to see [Giedraityte] perform because she switches from being and looking just like any teenage girl you would see in the halls to suddenly having a professional sounding voice. She gets so into each performance and then immediately after seems just like a chill everyday girl,” Burrows said. 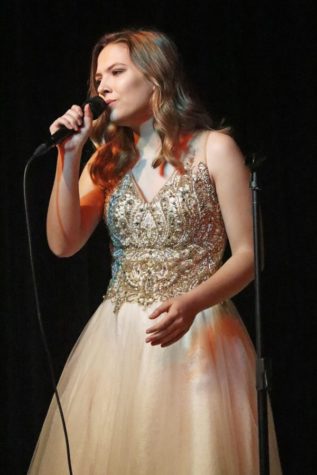 Giedraityte’s passion for singing has shed a spotlight on her musical talents.

“Her flexibility from jazz to classical to contemporary [is worth highlighting], and she always changes her technique to match the music being sung. She’s very even across all styles,” Burrows said.

Along with her success and recognition, Giedraityte has also experienced hardships. She sometimes finds it challenging balancing her rigorous academic responsibilities with her dynamic music career.

“I often miss school, and it’s really difficult to catch up sometimes because when I’m traveling I’ll maybe pick up homework I’m going to miss, but I can’t guarantee I’m going to find the time to get it done, and it gets complicated for sure… but I try my best to balance everything,” Giedraityte said.

In addition to academic obstacles, Giedraityte has to sacrifice part of what she describes as the “high school experience” in order to continue performing.

Fine arts instructor Joy Belt has worked with Giedraityte in both Madrigals and A Capella choir throughout her junior and senior years at DGS. Belt expresses her admiration for Giedraityte’s contributions to the choir program.

“Agne is one of the most vocally gifted students I have worked within my 20 years of teaching. It is inspiring to find a student that is humble, kind, a team player, incredibly hard-working, and cares for and supports the students around her,” Belt said.

“Agne is one of the most vocally gifted students I have worked within my 20 years of teaching.”

“She has a drive and work ethic for her music. She is passionate about singing and she puts in the long hours it takes to perfect the craft of singing. It is rare to find a student [like Giedraityte] that can match their talent with hard work,” Belt said.

Looking ahead, Belt is optimistic about Giedraityte’s future and is eager to follow her music career.

“It’s been a joy to watch her grow musically over the last few years. It will be very exciting to see where her musical journey takes her in her career,” Belt said.

Giedraityte hopes her accomplishments thus far will help secure her admission to her dream college, Berklee College of Music in Boston.

“I am pretty much devoted to doing music. I want to go to Berklee College of Music in Boston, so I definitely want to make music a career and develop it further,” Giedraityte said.

The concluding lyric from Andrew Lloyd Weber’s “Memory” serves as a fitting representation of the bright future on Geidraityte’s horizon.

“You’ll understand what happiness is // Look, a new day has begun.”