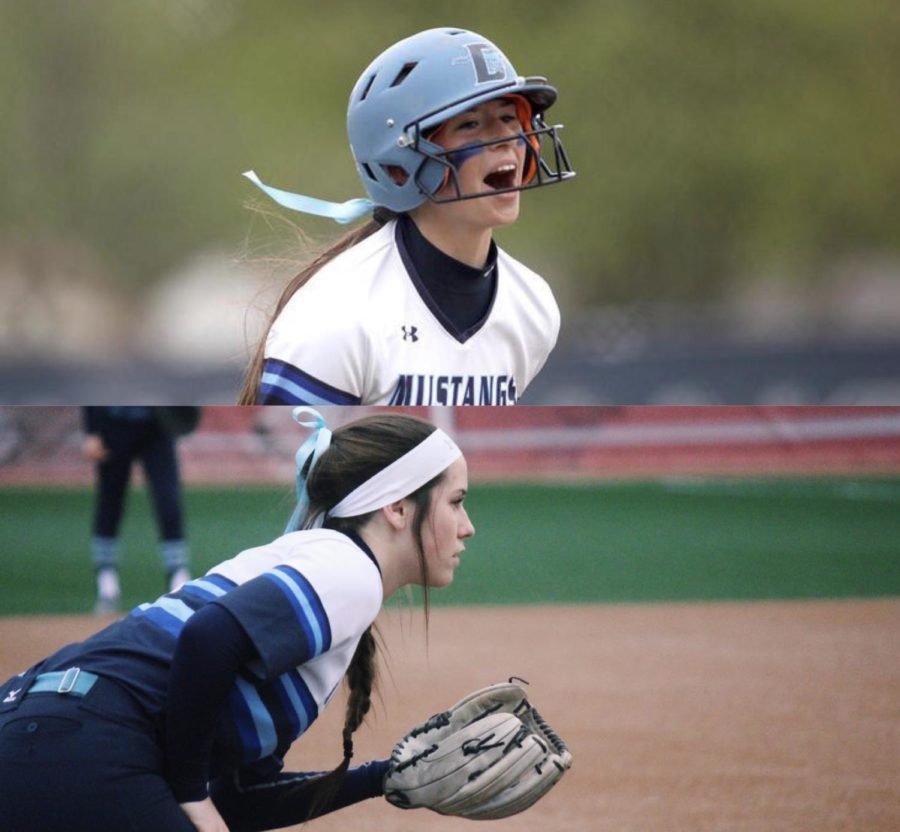 Morgan and Sydney Rau first stepped onto a softball field 12 years ago and have now committed to four more, at the collegiate level.

Senior varsity softball players and identical twins Morgan and Sydney Rau have just fulfilled a dream they’ve had since first stepping onto the field 12 years ago: committing to play at the collegiate level and at the same school.

In the fall of 2020, the Raus will trade in their Mustang jerseys for the black and gold uniforms of the University of Wisconsin–Oshkosh.

“Ever since 14u when we started showcase, I wanted to play Division I because I thought that’s what everyone does, and that was all that mattered, but in the last year … I started to [wonder] ‘is this really what I want to do, is Division I what I want.’ I’ve always wanted to play, but … I’ve had a lot of nights where I didn’t know if I should do it anymore, but [then] I knew that [committing] was something I wanted to do,” Morgan Rau said.

While Morgan Rau went back and forth when considering how she wanted to spend the next four years, that wasn’t the case for her sister.

“I think I always knew I wanted to play in college, but I just didn’t know where, and I didn’t really care what Division I went,” Sydney Rau said.

DGS varsity softball head coach Jim Cushing knew the girls wanted to play at the same school but wasn’t sure how realistic their hopes were until it happened.

“I knew that it was their intention, but I wasn’t sure it was going to work out that way. I don’t normally see twins committed to the same school to play softball. I think it’s pretty awesome though,” Cushing said.

Both girls expressed that something they valued during the recruiting process was whether or not schools would take both of them.

“I had one school in St. Louis that had a lot of interest in [just] me, and I kind of thought about it and going on a visit there, but when I started thinking about it, I started crying. I can’t do that, so I dropped the school,” Sydney Rau said.

I had one school in St. Louis that had a lot of interest in [just] me, and I kind of thought about it and going on a visit there, but when I started thinking about it, I started crying. I can’t do that, so I dropped the school,”

Despite spending their entire lives side by side, the twins don’t get sick of seeing each other, and they spend as much time together as possible.

“Every time we see each other we always just smile, and we constantly miss each other. Sydney will send me a text and say ‘I miss you’ after an hour of not being with me. It’s a built-in support system,” Morgan Rau said.

The girls’ father and travel coach Russ Rau expressed how his daughters remain extremely close and connected on and off the field. Both he and his wife feel more comfortable knowing their girls will take on this next chapter of their lives together.

“They’re really close. They both have their own strengths and weaknesses, but they complement each other … They have different skill sets both on the softball field as well as in the classroom … They have always been there to help each other out when the other is struggling academically or athletically. So for them to be together in college is just another stage in their life where they will grow as individuals as well as together,” Russ Rau said.

DGS social studies teacher and former varsity head coach Lauren Berg remembers exactly when she knew the twins had the skills to compete at the collegiate level.

“When they were at the camps as junior high [players], you just knew that they had a natural talent, a natural ability. They were super focused, they wanted to practice [their] skills and become better and more competitive, and [those things] make you coachable and make you a potential college athlete,” Berg said.

Cushing explained the specific skills that the girls possess, which set them apart from other athletes.

“​They have great knowledge of the game and their work ethic is second to none … They are the first ones to congratulate or console a team member,” Cushing said.

That work ethic is the result of years of dedication: the girls spend 11 months of the year practicing and playing either travel or DGS softball. They have been playing for the Wheatland Spikes competitive travel team since they were nine and have been on the Spikes’ college showcase team (on which all of the athletes have signed to a school) for the last few seasons.

“We started our travel career there, and we’re ending it there,” Morgan Rau said.

The girls’ travel season runs for the majority of spring and summer, but their work continues during the winter months.

“We take kind of a break after summer ball, and then in the winters, too. We have a hitting lesson once a week, at least, and we also pick up days to workout,” Sydney Rau said.

The girls make an effort to set examples for their teammates not only by demonstrating their skill on the field but also in attitude.

“They’re very athletic and very motivating. I look up to Morgan because she plays the same position as me, so I… want my work ethic to be like hers. They’re both always motivating me, even when I do back, they’re like ‘you’ve got it next time,’ and it’s because they’ve been in my shoes,” junior and varsity infielder Daly Garland said.

Despite their obvious similarities, it’s hard to compare one twin to the other in terms of their athletic abilities. Morgan is an infielder, primarily at second base, while Sydney dominates in any of the outfield positions.

“That’s just the downside of having a twin, there’s a built-in comparing system. ‘Who’s better’ is always the question, and sometimes I hate playing with her because there’s days she’ll do better, and I want to be like her,” Morgan Rau said.

Though their field skills and physical talent have been confirmed by their signing to Oshkosh, both girls have other strengths they plan to bring to the team.

“I’m more of a vocal leader. I like to keep my team focused and be [a] leader on the team,” Morgan Rau said.

“I like being a team player and talking to everyone and being able to connect with everyone,” Sydney Rau said.

In addition to technical and athletic skills, the twins have also absorbed a lot of life lessons from their years on the field. Russ Rau expressed how he has seen his youngest daughters grow as a result of softball and their dedication to the sport.

“They have grown to be both independent and individual young ladies as well as being there as teammates for each other and their other softball teammates. Softball has given them the ability to see that they can be strong, independent young ladies that can accomplish goals, any goals with hard work and commitment to that goal or desire,” Russ Rau said.

The girls are looking forward to getting on the field at Oshkosh and are excited to start a new chapter of their softball careers. They’ll continue the sport they love but also get to have a real college experience.

“They mostly try to [have games] on the weekends, they don’t try to take up your class schedule, that’s the good thing about Division III, you have practice maybe three to six, which a normal time, and it’s the same kind of schedule [we’re used to] and it’ll be harder, just a little more intense,” Morgan Rau said.

Russ Rau expressed his and his wife’s overall hopes for their daughters as they take on the next four years.

“First and foremost, we want them to enjoy their overall college experience. We want them to have fun, but be dedicated to their academics as well as their softball,” Russ Rau said.