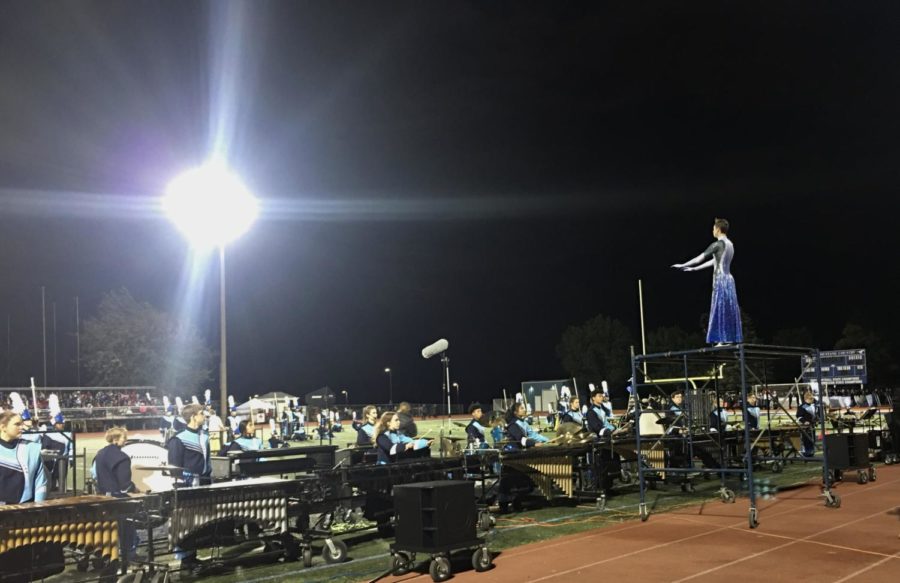 Junior drum major Jeffery Weinholtz leads the band during their show at the Music Bowl competition at DGS.

The crowd’s reflection shone back at the audience as the marching band rolled large mirrors onto the field — chiming percussion and echoing vocals sounded as they marched their way to two grand championship titles this season.

“‘From the beginning, we are all told how to live and how to act,’” director Dajuan Brooks said as he quotes the show’s opening line. “The whole premise is we are all told these things and what happens is as you get out in the real world, no one gets to make those decisions for you except you. … Then you’re looking at yourself in the mirror and [wondering], ‘Who am I?’”

According to Brooks, in DGS history, the marching band has never placed as high as they did this season at Lake Park, Romeoville, and the University of Illinois.

“I’m really proud of the band,” sophomore Max Fido said. “Seeing everyone work hard and sweat until [they] are collapsing during mid-August and putting countless hours in … [is worth] seeing it being paid off.”

The band kicked off rehearsals for their show in early April and their competitions this fall. Senior Jordan Murley expressed her praise on the band’s season so far.

“This year for the band as a whole has been fantastic. We took 3rd at our first two competitions and first as well as grand champion in our most recent one,” Murley said.

“It’s incredibly liberating to put on a show that applies to your life and that can connect to so many different types of people, especially because it gives you and others the opportunity to change themselves into the people they want to be,” Burrows said.

Along with the theme of the band’s show, members also find benefits being involved in marching band. Senior and trumpet co-section leader Matt Fischer spoke on how being a part of the Marching Mustangs has affected him.

Junior and drum major Alaina Garcia spoke on what her leadership role in marching band has done for her.

“I used to be really shy. … And then I took [a big] jump [out of my comfort zone]. I love the relationships that I have with people. It just feels really nice to know that they trust me and … rely on me,” Garcia said.

As a parent of three students involved in the program, Jason Burrows believes band has greatly benefited his children and spoke on how he has watched their development, as well as the band’s, over the past six years.

“It forces students to understand the importance of time management. When they arrive in the fall of their DGS freshman year, they have 130 best friends because of their summer band camp work. … Marching Band stimulates their minds through counting, dots … and their marching positions and they learn different things than other musical classes,” Burrows said.

In addition to building upon leadership skills, Fischer believes marching band has aided in his personal progress and achievement.

“Marching band teaches me every single day to be the best version of myself on and off of the field, and everybody is family. Having both of these things and so much more makes marching band the best thing I’ve ever involved myself in,” Fischer said.