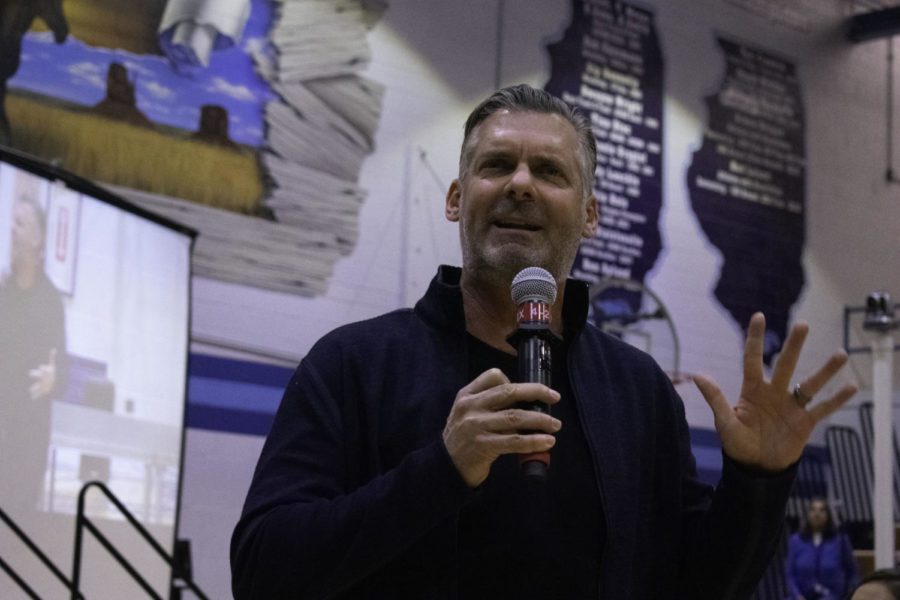 Slowikowski, walks down the center aisle of the gym as he pours his heart out to the students of a lifetime of struggle and gain.

The 2019 Red Ribbon Week assembly was met with both positive and negative feedback from the DGS student body.

Slowikowski opened his speech by going in depth, describing a defining moment in his life — breaking the four minute mile barrier. He connected this milestone to a seven-step, “four minute formula” to aid others in living life to the fullest. Although this was not expanded upon at a later time in the presentation, I do think the simplicity of just stating the formula allowed for everyone to make their own interpretations as to how it can apply to their own lives.

The talk continued with Slowikowski acknowledging that he has never used drugs, alcohol or other substances. To some people, this fact may have caused the entire speech to seem disconnected from the meaning of Red Ribbon Week, which encourages students to live lives free from the usage of harmful substances. However, I believe that Slowikowski’s personal choices served as proof that you can overcome obstacles in life through healthy methods of coping.

Things began to progress as Slowikowski shared some personal anecdotes, starting with how he witnessed his mother’s crippling anxiety at a very young age. He explained that this was his very first memory and a challenging time in his life that played a role in his formation as a person. This was a way for the audience to catch a glimpse of Slowikowski’s early years and respect his willingness to be so open.

Another story displaying Slowikowski’s vulnerability pertained to his divorce. Sharing his perspective was yet another way to connect with his audience while giving an example of a time in his life where he dealt with his grief  without the use of drugs or alcohol. While I understand that this is a sensitive topic for many people, I believe he handled it in a mature manner.

Afterwards, Slowikowski shared the story of how he met his current wife. To some people, this was not a relevant topic in the presentation, but it ultimately showed how Slowikowski endured a difficult time in his life and eventually moved on.

Transitioning into an interactive point in the assembly, Slowikowski told the story of a boy who was tragically killed during the shooting at Sandy Hook Elementary School in 2012. Even though he left the earth at a very young age, this boy had a lasting impact on people through his confident and caring personality. He did not care what others thought of him because he knew that he carried so much potential.

Slowikowski then had his audience take a moment to realize that they hold the capability to not only believe in themselves, but also touch the lives of others. He asked all of us to close our eyes and stand up if we could visualize ourselves helping a family member, friend or other acquaintance facing some kind of obstacle in their life. This served as a powerful image when every member of the audience opened their eyes to see the entire student body standing, everyone felt capable of making a positive impact.

The assembly came to a close after Slowikowski shared some of his favorite dance moves on the stage. I think that was meant to show us that we should be confident in ourselves, no matter what we are doing. After all, dancing in front of a few thousand judgemental high schoolers takes a large amount of courage.

Although Slowikowski’s address to the students of Downers Grove South High School may not have directly related to Red Ribbon Week, I believe it offered some valuable messages to which most students could connect. He encouraged everyone to have the utmost confidence in themselves, and to turn to others when personally in need of support. Slowikowski essentially provided optimism that may prevent some students from coping with their difficulties in an unhealthy manner.

Once he was done sharing his running moments, Slowikowski went into the only time that he mentioned drugs and alcohol throughout his entire presentation. He expressed that he has never smoked a cigarette or had done any drugs or alcohol. I personally feel that for our Red Ribbon Week assembly, we should have someone who has a story about how drugs and alcohol have influenced their life and how they have overcome that struggle.

While it is good for Slowikowski personally that he hasn’t done drugs or alcohol, I feel that idea left a mixed message for some students during the assembly. A mixed message that states that you need to be drug and alcohol-free to be successful in life.

Another thing that I feel didn’t relate to the topic of Red Ribbon Week was when Slowikowski went into detail about his divorce. Bringing up the topic of divorce and telling students that divorce is never their fault was totally unrelated to the topic of Red Ribbon Week. Unfortunately, some students were drawn away from Slowikowski’s presentation and were brought back into a time of their parents’ divorce, that didn’t relate to the presentation at all.

The topic of divorce wasn’t the only topic that didn’t relate to Red Ribbon Week. Slowikowski then proceeds to share a story about a time that he met a father whose son was killed in the 2012 Sandy Hook Elementary School shooting. While Slowikowski was sharing this story, he explained to us as his audience that he presented for the father for free due to his sponsorships.

This information should not have been shared with the students because it left an unprofessional image for Slowikowski’s company.

This area of Slowikowski’s presentation seemed more like a self-promotion for his company than anything. Not only did he mention how he spoke at the school for free, but he also brought up, yet another topic that had absolutely nothing to do with living a healthy lifestyle or staying drug and alcohol-free.

Going off of leaving an unprofessional image for Slowikowski’s company, he gave out his 15-year-old daughter’s Snapchat in front of the entire school. While this may have been intended to be a joke, it left me wondering if Slowikowski was here to promote his family’s social media platforms or if he was here to present a presentation regarding Red Ribbon Week.

Lastly, I feel that Slowikowski’s dancing wasn’t the most appropriate thing to be doing in front of a student body. He performed new dances such as the woah and old dance moves such as the moonwalk. Some of Slowikowski’s gestures during his dances left students laughing and thinking that his presentation was more of a joke than an educational moment.

Overall, I feel that Slowikowski’s presentation had nothing to do with the Red Ribbon Week message regarding how to live a healthy and drug and alcohol-free life. I was highly disappointed that our presenter focused more on promoting his company than on educating us about how to life a healthy lifestyle. My hope for the future of Red Ribbon Week assemblies is that our school will bring someone in who has a story regarding how drugs and alcohol have impacted their life and how they have overcome that challenge.