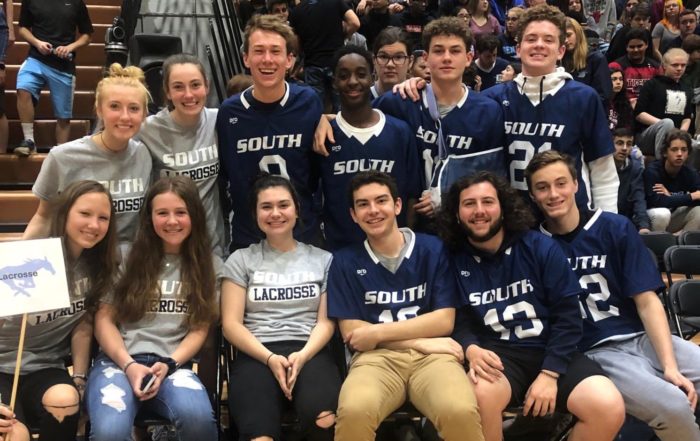 Girls lacrosse sat on the floor for the Spring Philanthropy Assembly alongside the boys lacrosse team. (Courtesy of Kim Pakowski)

Girls lacrosse sat on the floor for the Spring Philanthropy Assembly alongside the boys lacrosse team.

At every assembly for the past four years, DGS Athletic Director Randall Konstans has taken a few minutes to commemorate each of the sports teams on their achievements throughout their respective seasons. It was not until recently that girls lacrosse was among those teams to be recognized.

After this year, girls lacrosse has been an IHSA sport for two seasons; however, varsity lacrosse player Sam Hanek said because the team is a co-op with DGN and is run primarily through DGN, it is often not recognized at DGS.

“When walking around the halls, you have probably noticed that we decided to decorate lockers at the beginning of the season. … The girls at [DGS] have been really good at verbally promoting lacrosse,” Hanek said.

The lack of representation for girls lacrosse is relatively noticeable, even for newer members of the team. Freshman and first-year varsity lacrosse player Ysabel Pakowski touched on the issue her team faces.

“Since it is combined with North, girls at South aren’t represented as much because it is hosted at North. … [Also] the program is relatively new and people just don’t hear about it,” Pakowski said.

DGN senior and varsity lacrosse player Emma Svoboda has noticed a similar lack of knowledge to DGS at her school.

“Honestly, I think DGN gives limited amounts of support to the girls lacrosse team. We are mentioned on the announcements occasionally, but I am pretty sure my coach organizes that, not the school. … I don’t think DGN is trying to avoid talking about us,” Svoboda said.

Similar to District 99, lacrosse has not become that popular in the midwest. Lacrosse’s popularity is generated on the East Coast.

Along with the struggles of playing an east coast sport in the midwest as well as other less popular sports, it is difficult to attract students’ attention to the girls lacrosse team.

“Our team is 75% from North; [DGN] definitely gets more exposure to girls lacrosse. There are more girls wearing our spirit wear, dressing up for home games and more lockers decorated,” Hanek said.

DGS Student Activites Director Jennifer Martinez believes that in order to increase the awareness of the girls lacrosse team, social media might be the key.

“I know they have a twitter handle which is something new this year. … The announcements, the posters [that the girls lacrosse team hung in DGS with the time and location of all their home games], the social media,” Martinez said.

The goal of the co-op girls lacrosse team is to increase the program so that DGS and DGN can eventually form their own teams.