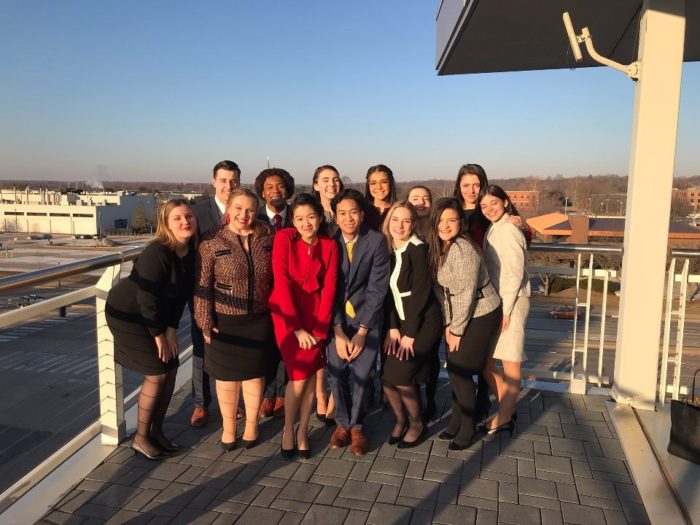 The IE team at the state competition in Peoria. (Photo courtesy of Caroline Venetis)

The IE team at the state competition in Peoria.

The DGS speech team: A legacy and a tradition

“Qualifying for state was one of the most stressful but enjoyable experiences I’ve ever had. … At sectionals, the stakes are raised exponentially because there are more schools competing,  and it narrows down to the top three competitors in each event moving on to state,” Tate said.

The DGS speech team has won more state championships than any other team in Illinois. For the past two years, the speech team has placed first at state. This year, the team started the state series with 14 people. Twelve made it to sectionals and five advanced to state.

At the state series competition level, there are the Individual Events team and Performance In the Round. The 2018-2019 IE team was made up of 13 people, selected from the entire speech team. PIR placed seventh at state.

The 2018-2019 competitors were mostly new to the state level competition scene, with only one returning individual events state entry.  Former head coach of 32 years and current assistant coach Jan Heiteen believes next year will be another successful year for the DGS team since a majority of the 2018-2019 team will be returning, with only three members graduating from the state team.

“After winning the state championship for the previous two years and graduating most of those team members, this year’s team is young in comparison; however, they stepped up as leaders and champions, winning many team and individual awards during the season,” Heiteen said.

Senior Janella Guzman has been a member of the speech team for the entirety of her high school career, competing on the state team since she was a sophomore. Similar to the team’s previous members, Guzman shows her support for her less seasoned colleagues.

“For state series collectively as a team, we had two out of our 14 events not qualify for regionals, but no matter the outcome, the support we have for our teammates is unwavering,” Guzman said.

One of the youngest on the state IE team was sophomore Zoe Boyd. With this being Boyd’s first season on the state team,  she did not advance past the sectional final, although she did achieve her personal goal of performing well during the regional competition.

“The team as a whole has been working very hard and doing really well over the course of our invitational and state seasons. Not just in placing at tournaments, but I’ve noticed a lot of growth in my teammates’ skills and confidence which makes me really excited for the years to come,” Boyd said.

Head coach Justin Matkovich was a student and speech competitor at DGS; he remembers practicing from 3:30 to 9 p.m. In comparison to the current team’s practices, Matkovich notices similarities to when he was a competitor.

“One of the cool things about our staff now is that … everyone on it is DGS alumni. … A lot of stuff that we did back when I was in school is the same stuff we do today,” Matkovich said.

Peter Szpytek was on the team from 2012-2016. Szpytek is now an assistant coach and sees resemblances between how the team operates now and during his years as a competitor.

“The team is similar to how it was when I was a student with some small changes. … A lot more is done digitally now, but it’s for the best. … When it comes to getting work done and competing though, things are pretty much the same,” Szpytek said.

With long-standing traditions and a relatively new team, many believe they have the potential to be state champions once again. As their team begins to set their sights on next season, Heiteen expects each member to uphold and follow the standards previous members have set.

“We have a proud tradition at DGS, and as each team takes their place on the IHSA stage, they represent those who came before them. Each team is part of that tradition,” Heiteen said.