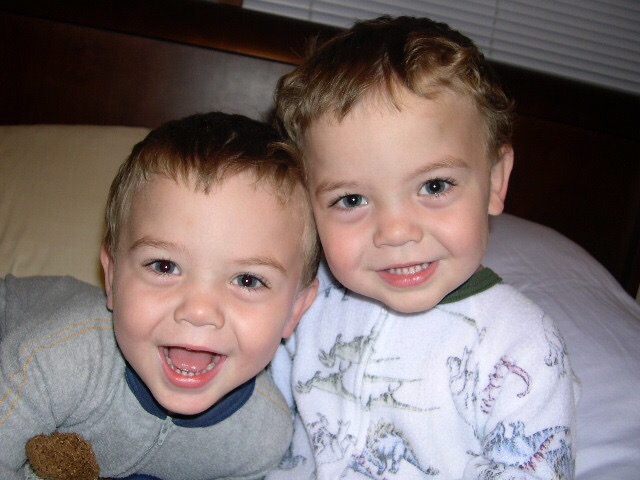 Freshmen Lauren and Peyton Norkus with their little sister.

Two of a kind

Twins — there are roughly 10.5 million of them in the U.S. However, in a country of 325 million, that’s only 32 in every 1,000 people. Most Americans don’t know the unique life experiences that come with being a twin.

Being a twin can be an odd thing to get used to. Sophomore Joseph Rosalia says that looking at his twin brother, Anthony, is like looking in a mirror.

“It’s kind of weird. You see another version of yourself, but they’re doing absolutely different things,” Joseph Rosalia said.

When twins collaborate, they can make for double the trouble. One classic twin trick is the old switcheroo, where a pair either dress in each others’ clothing or simply say they are the other twin. When they were younger, Junior twins Jacob and Griffin Casella tried to see whether their family would notice they switched places.

“When we were little … we tried to trick family members and stuff. Obviously, it wouldn’t work,” Griffin Casella said.

Some took it a step further, trying out their trickery on more than just family. Freshman twins Peyton and Lauren Norkus tried to fool their teachers in elementary school, but their plan backfired.

“In fifth grade, we switched classes together and I went to all her classes, she went to all mine — we ended up getting a detention, so that was not great on our records,” Peyton Norkus said.

While some twins may look identical when little, they can start looking quite different as they grow older. People don’t mix up the Casellas very often anymore.

“We used to get confused a lot when we were little, but now we look pretty different … once you get to know us a little bit, you can tell us apart,” Griffin Casella said.

For others, however, confusion is still an everyday reality.

Even fraternal twins can get mistaken for one another. Junior Emily Leatherwood had an awkward experience when someone saw her last name on a list and assumed it was her twin brother, Johnathon.

“All they saw was ‘Leatherwood’ [on a roster], so they thought it was me,” Johnathon Leatherwood said.

However, just because they can look alike does not mean that they have the same personality. An online quiz told the Norkus twins that they are opposite in nature.

The Rosalias have different personalities and different interests.

“[O]ur interests are highly different — food, music, … interior design, you name it. I’m more minimalistic. I go for less things on the walls. I try to keep an organized space,” Anthony Rosalia said.

Despite their differences in both looks and personality, twins have qualities that work well with one another, making for a lifelong bond. Emily Leatherwood says that her brother is a good complement to her own persona.

“I’m a lot more pessimistic, perfectionist, kind of knit-picky, more academic-focused, more dramatic … he’s a lot more of a peacemaker … I think he’s nicer than me, honestly. He’s a lot more generous and weird. We both obsess over things, and we’re both hard on ourselves, but we don’t have fighting personalities,” Emily Leatherwood said.

What sets twins aside from typical siblings is the age difference. Having been born at the same, twins undergo the same life experiences together, allowing for a greater sense of familiarity with one another’s lives.

“I’m constantly at my brother’s concerts, sports games …. We wouldn’t be able to gossip about the same people because we’re exposed to the same people in classes and things like that because we’re in the same grade, so if he was just a grade lower or above, it would just make those common differences that you see with regular siblings,” Emily Leatherwood said.

Twins also love a good tease, particularly when it comes to who was born first. Most twins are born anywhere from ten to 30 minutes apart from one another, so a matter of seconds can determine who gets a lifetime’s worth of bragging rights, and Griffin Casella knows what that is like.

“He kind of holds it over me sometimes — I think I act like an older brother, but he’s older,” Griffin Casella said.

The older of the two may see it as a point of pride. Emily Leatherwood joked that it’s her defining characteristic.

“I am the older twin by 35 minutes … it’s the most important part of my identity,” Emily Leatherwood said.

For the younger one, it can be a constant reminder of inferiority.

“I am the younger twin by nine seconds. I hate it. Every time on our birthday, it’s ‘Wait nine seconds’,” Peyton Norkus said.

Still, others like Johnathon Leatherwood find enjoyment in being the youngest.

“I think it’s kind of funny, because she always brings it up — just in general conversation whenever anyone mentions twins, it’s always, ‘By the way, I’m 35 minutes older’, so I kind of like it because I get to be the butt of all jokes,” Johnathon Leatherwood said.

In the Rosalia household, the subject of who’s older is still up for debate.

Twins look at social interactions from a different lens. Johnathon Leatherwood thinks it has helped him appreciate the closeness of friendship.

“It’s helped me think not on surface-level, like, ‘Oh, they’re talking. They must be girlfriend-boyfriend’ — that kind of jazz. No, they could be friends, they could be brother-sister … One person asked [if we’re] in a relationship, and that was weird, so it kind of helped me think not just surface-level about a lot of people’s relationships,” Johnathon Leatherwood said.

Notably, twins have a deeper understanding of what it means to be in a close relationship. After all, by spending the first 18 years of life with one another, they are bound to bond.

“He’s the person you’ve known all throughout your life, whether it be at school, in your house, or even on a camping trip. He’s the person that knows you most because he’s your closest friend of everyone,” Anthony Rosalia said.

Having a twin provides a person with a lifelong friendship. Griffin Casella is thankful to have Jacob by his side.

“I love my brother … I wouldn’t have it any other way,” Griffin Casella said.