End the trend: the dangerous effects of glamorizing student-teacher relationships in teen TV 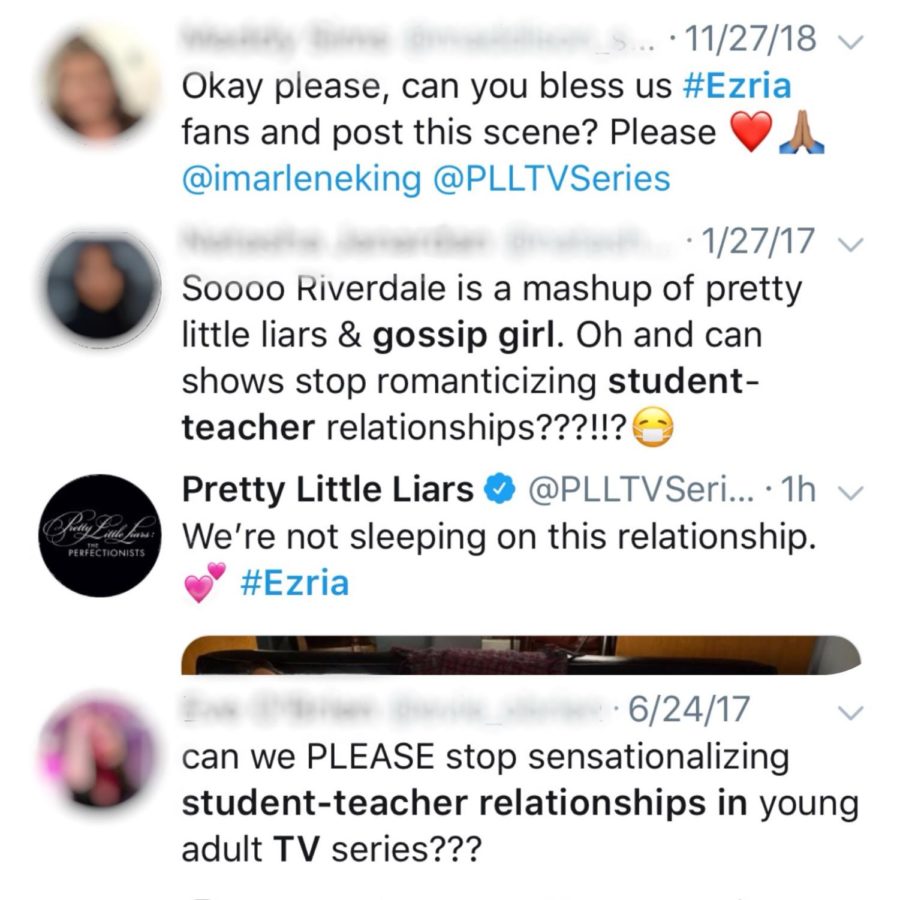 Teen television is addicting. There, I said it. It’s true.

There are many TV dramas targeted to high school students that have gained immense popularity among the youth demographic, especially in our time of viral mass media. These shows grasp viewer attention with their oftentimes enigmatic and thrilling plot lines, leaving audiences anxiously awaiting the next part of the series. And I’ll admit, sometimes an hour-long episode of “Riverdale” at 8 p.m. on a Wednesday night offers the perfect form of escapism for teens like myself who just need a break from their otherwise overwhelming and stressful school lives.

As a result of spending immeasurable amounts of time streaming these shows, I have begun to notice some similar trends arising between them. Common themes such as mystery, sensuality and scandal are all vital to the very definition of solid teen television. Although most of these scenarios are clearly exaggerated and created for mindless entertainment, one surprisingly popular trend among far too many of these programs caught my attention– and not in an acceptable way.

Let’s discuss the romanticization of student-teacher relationships in teen television and why this glamorization of statutory rape is extremely detrimental to the youth mindset.

Some instances of student-teacher intimacy plot lines in teen television include scenes from “MTV’s Scream,” “Gossip Girl” and “One Tree Hill.” However, the two most relevant examples from recent years can be found in the popular Freefrom series “Pretty Little Liars,” which just completed it’s extended run in June of 2017, and “Riverdale,” which is one of the biggest shows of 2018 and is currently premiering its third season on the CW.

Although these shows may seem different on paper and are ran by competing networks, their core subject matter is principally the same. Both programs center around sophomore students who navigate a fictionalized high school scene plagued with murder, mystery, blackmail and some major revelations. One of the most notable aspects of these shows happen to be the characters’ relationships, which take up a large portion of each episode’s screen time and heavily influence the plot.

Unfortunately, some of these relationships are perceived to be something they are not. In “Pretty Little Liars,” 16-year-old Aria becomes romantically involved with an older man named Ezra Fitz at a bar over the summer, only to discover on the first day of school that he is her English teacher. Although this relationship is classified under statutory rape and is against the law, the pair decide to stay together and even get married at the end of the show’s run.

This is problematic in many ways. First of all, the show’s writers and producers depict the relationship in such a way that it is perceived to be acceptable. The show wants you to root for the couple to stay together, despite countless unethical red flags, simply because of under-aged Aria’s unwavering belief that “Mr. Fitz” is the love of her life.

Even more alarming were the reactions of Aria’s friends. They encouraged her to keep seeing Mr. Fitz, never suggesting that her decision to date him was misguided or that she was at risk to be manipulated and taken advantage of. Aria goes as far as telling her parents about the relationship, and despite their initial outrage, they eventually came to terms with and even began to accept the couple.

Fans of “Pretty Little Liars” were also very accepting of Mr. Fitz and Aria’s intimate relationship, which show creators quickly realized and used to their marketing advantage. The show began capitalizing on the couple, selling merchandise such as t-shirts that read “I heart Mr. Fitz,” clothing that would be worn by under-aged girls all around the world and in real-life school environments. Additionally, the relationship was spread across social media by the “Pretty Little Liars” marketing team, and the hashtag “Ezria,” the couple’s “ship” name, was trending on both Instagram and Twitter.

To summarize, the show exploited rape culture and attempted to popularize student-teacher relationships in the process by profiting off of an illegal, falsely romanticized couple.

“Riverdale’s” inappropriate relationship between sophomore Archie Andrews and his music teacher Ms. Grundy follows the exposition of the “Pretty Little Liars” plot line, also beginning in the summer before school. In contrast to “Liars,” this relationship does end as a result of parental intervention after only a few episodes into season one. Ms. Grundy is forced to resign from her job and move out of town immediately following the adult confrontation.

The issue I have concerning this resolution is that Archie and his friend Betty convinced their parents to not involve school or police intervention, and instead had them resolve the problem with Ms. Grundy privately. The reason this is troublesome is because it is later suggested in the series that Ms. Grundy was a child predator and that she is now targeting other students at schools outside of Riverdale. If Archie’s parents would have involved the police, Ms. Grundy would not be able to prey on other minors and would be given a worthy punishment for abusing her power over a 16-year-old student.

Both of these shows, along with numerous other examples of student-teacher intimacy in teen TV, present very disappointing interpretations and conclusions to these illegal relationships. It is distressing to see these couples develop on-screen with very little consequence or backlash.

This is alarming because it connects to real-life situations that are being played out in American school districts. Too many allegations are arising, and the fact that these TV shows present plot lines romanticizing the issue is both concerning and upsetting to see.

As the recent DGN allegations have shown, student-teacher relationships are not only harmful to the people involved in the accusations, but also to the families and communities that are impacted by this betrayal of trust and abuse of authority. The fact that teen television glamorizes these cases of statutory rape as proclamations of “forbidden love” teaches our generation’s youth the wrong idea, while also undermining survivors who were sexually harassed by an adult in a position of power.

Because in the end, student-teacher relationships are a form of statutory rape, not the latest teen television trend.