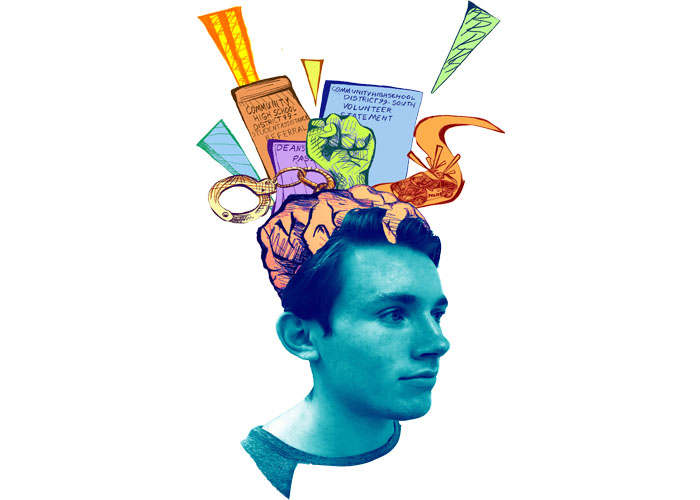 In light of the national discussion on safety, DGS has made some changes, increasing the number of security personnel. However, instead of defending the school from external threats, these faculty members find themselves breaking up fights between students. They then hand the students over to law enforcement, where the attempt to intervene on these students’ future conduct begins.

How the school punishes students

When involved in a fight, students are given consequences. The punishments are decided by the students’ deans and the administration.

During the 2016-17 school year, DGS had 16 fights and three batteries. A battery within the school is considered a one-sided fight where an individual is bothering another student. As of this school year, there has been eight fights and one battery.

DGS associate principal, Dr. Karen Taylor elaborates on the procedures taken when a fight occurs within the school.

“So the very first action, of course, is to separate the fighting individuals and ensure that students are safe … from there, things get very situational,” Taylor said.

The severity of the fight will determine what the punishment is; according to the DGS student handbook,

“Depending upon the seriousness and frequency of the offense, the penalty may be less or more severe.”

The deans then conduct an investigation to see what led up to the fight. The administration checks security cameras and interviews witnesses. They speak with the individuals involved and look at both sides. Everyone that was actively involved in the fight is punished.

Although some students see their involvement as self-defense, at DGS once you choose to engage in the fight, you are on the offensive side. You are considered part of the fight, there is no defense, only offense.

According to the DGS student handbook, once you throw your first punch you’re responding to an aggressor with aggression.

Some students believe this is unfair because when someone provokes you, you should be able to protect yourself from an aggressor. Junior Rosalinda Velazquez believes that a student who fights back should not be punished because they are defending themselves.

“Giving [everyone] involved in the fight a ticket or suspension is unfair because one person could’ve been defending themselves [from the aggressor],” Velazquez said.

On the contrary, Taylor believes that students should take the punch or find a way out of the situation.

“There are lots of opportunities for students to get away, for students to not engage in a situation and there are adults nearby to help, protect and keep students safe,” Taylor said.

Fights are a part of high school, and when a fight breaks out, security officers jump in to intervene. While this occurs, other security personnel will get on the radio and notify the deans, the school resource Officer Kevin Chapin, and extra security personnel that are free. Those who are fighting are separated when this occurs, and the deans take the students down to their offices.

Officer Dan Niemann explained the importance of defusing the situation and the next steps necessary for handling fights.

“We get everybody down to the dean’s’ office, and we try to get to the root of the problem, and then we try to come up with a solution to the problem,” Niemann said.

The deans and administrators take care of the situation at hand and handle the consequences. Meanwhile, they notify the Downers Grove Police Department, whose school resource officer is Kevin Chapin. The police take a note of the incident, get the names of those involved and oversee the review process of the fight.

“If there’s a fight, we all share radios. So there’s typically communication whether it’s a student supervisor, security officer, myself, a dean or staff [that] gets notified. We’re going to review videos and stuff of that nature,” Chapin said.

Consequences follow fights and the school and DGPD determine the consequences after reviewing videos from the cameras and interviewing students. The consequences come in different forms, as the deans primarily handle in-school punishments while the DGPD solicit their own form of punishment depending on the severity of the fight.

However, the topic of self-defense comes into question when determining the harshness of the fight. When reviewing the footage of the fight, administrators and police decide the proper punishments for students. They also must determine if a student is in self-defense, and when a student chooses to engage and go “on the offensive”, as punishments may vary depending on how they determine a student was engaged.

“In school, the way it works is yes we can have a person initiate a fight, they’re still the offender. We can then have the individual who’s actually defending themself but then engages in the fight receive consequences for engaging. That’s what’s called disorderly conduct,” Niemann said.

In order to ensure that students do not get punishments that can put a negative mark on their resume, security guard Cahill offered an explanation for preventing fights before they even start.

“[We should have] more staff members in the hallways, as we’ve roughly got 2,800 students. [They’re] in the cafeteria, and the hallways are pretty full, and it can get pretty chaotic,” Cahill said.

Chapin explicitly stated that students who get involved in a fight will receive consequences and that those who are attacked should do whatever they could to avoid getting involved.

“It’s important that we’re very clear-cut [that] if two people are engaged in a fight, there have to be consequences for both. Very rarely have I seen it where a student is sitting at a table and it’s a random attack. If someone’s being attacked and I’m watching the video and they’re clearly just pushing and not hitting, or someone aggressively gets in your face, that’s when you turn around,” Chapin said.

Students who initially are attacked then retaliate will likely receive consequences as a result of reengaging the attacker, therefore prolonging the fight. Punishments follow swiftly, as Niemann and Chapin corroborated.

“A battery offender is the person who makes contact in an insulting or provoking nature. That person who initiates the fight may get more severe consequences because battery is a more severe crime than disorderly conduct. However, yes, the student does get in trouble for engaging in a disturbance that occurred in the school,” Niemann said.

“It can either be handled only by the school, or it could be handled with me, and we could have a village ordinance charge. [Anything] that’s a little excessive [such as kicking and punching], that’s when the charge is a disorderly conduct charge, a village ordinance, and the subsection under that is fighting. So it’s engaging in a fight,” Chapin said.

An actual example of the bystander effect

DGS students have the tendency to share videos on social media when fights break out. Throughout the years, the act of taking out your phone seems to immediately has become a norm when a fight occurs.

Senior Claudia Kattke believes students record fights in school because even with the aspect of fear and injury, it can be related to the thrill of watching an action movie.

“People will sometimes even have the urge to run up to the fight and record it. If they know about a fight happening they will want to be there to take a video and share it to their peers. I think people record these fights because it is kind of just like an action movie where you watch violence and find entertainment in it. [Recording the fights] is messed up, but it is how teenager’s minds are sometimes,” Kattke said.

Junior Stefan Tambik believes the recording and media attention of fights shines a bad light on DGS as a whole school — not just on the students involved.

“It just makes our school look a lot less inviting. Other schools probably have higher fight rates. But since they aren’t being recorded as much, the fact [that] they have more fights doesn’t hinder their reputation. I think it’s the physical evidence of the fights that connects more to people as threatening,” Tambik said.

Senior Scottlyn Williams believes the recording of fights is something that represents the violent nature of society overall.

“Taking a video and showing people like it’s a trending show numbs us to the underlying causes of such built up anger and violence in not just our student body but in our society as a whole,” Williams said.

Although bystanders are told to get security officials right away, instead they take out their phones to capture the moment, going against all of the rules students are told to follow.

“Very rarely do any bystanders try to stop a fight. If anything, they help hype it up and make it more out of hand,” Hanek said.

Kattke suggests that viewers of fights can sometimes take sides and add more fire to the fight.

“People are adding more negative energy into the environment where the fight is happening and they are hyping it up. They will sometimes pick a side and hype the other person to fight them or beat them up,” Kattke said.

“People are adding more negative energy into the environment where the fight is happening and they are hyping it up. They will sometimes pick a side and hype the other person to fight them or beat them up.””