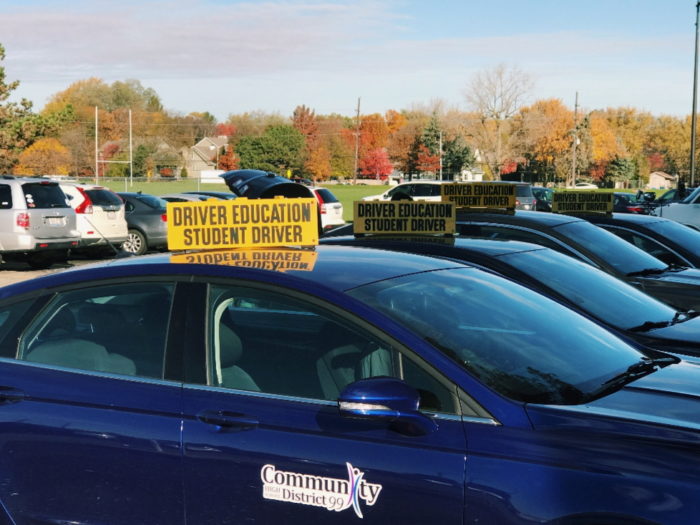 The drivers education course at DGS has four practice cars, which students use for the behind-the-wheel portion of this class. (Photo Courtesy of Timothy Cappelen)

The drivers education course at DGS has four practice cars, which students use for the behind-the-wheel portion of this class.

Cars sit in the DGS parking lot, ignition running—waiting for its passengers during the cold months of winter. Driver’s Education teachers Robert Bozek, Troy Michalek, Tony Neverly, Kristopher Olson, Jonathon Stapleton and Timothy Cappelen walk towards each car, their students following shortly behind. As the student drivers take their seats, they grip the steering wheel tight and wait for their turns to pull out of their parking spots and onto the busy streets of Downers Grove.

Whether it be a car, a motorcycle or an airplane: a driver’s license is required. People usually learn how to drive through a driver’s education course. Assistant Principal for Counseling and Student Support Vince Walsh-Rock estimates how many students take the course through the school versus those who take it privately.

“With a class size of 700 I would say we have averaged about 430 students taking Drivers Ed at school and the other 270 taking the Driver’s Education privately (Top Driver, Michaels, etc…),” Walsh-Rock said.

Although the course is named Driver’s Education, at DGS, it is more than just learning how to drive.

“[Driver’s education] is a safety course of trying to make sure that the students are well aware of the laws and regulations of the road,” Bozek said.

Just like any other teaching position, becoming a driver’s education teacher has its requirements. Along with their normal teaching degree, teachers must get a certification, also known as an endorsement, to be able to teach this course.

“What mostly happens for driver’s education [teachers] is we major in something else and then we get an endorsement in driver education. So really, [learning] safety and technology is what it comes down to be …  It’s an eight-class, 24 credit endorsement. So it’s a major, major endorsement,” Cappelen said.

Driver’s education teachers at DGS usually start as PE or Health teachers.  They either want to teach this course, or the PE department offers them the job.

“I think initially it was, to be honest, it was just a job opportunity so I did that for that reason having done it now for 22 years. What I really enjoyed about it is just seeing student growth; it was very evident,” Stapleton said.

Similarly,  Health teacher Troy Michalek already had connections and experience with the course itself, which made him want to teach this course from the start. For reasons unknown, Michalek says, most of the driver’s education teachers are coaches at DGS as well, which made the job more interesting to him when he was a student-athlete at DGS.

“Typically PE teachers who are coaches, just coaches in general, tend to teach drivers ed that you know I don’t know what the actual reasoning is behind it but it’s just some teachers that I had were easy to relate to and I got along with very well when I was a student here,”Michalek said.

The state of Illinois requires its students to take a Driver’s Education course before they graduate. Students are not required to take it through the school; however, junior Mireille Saeed took the course through the school because she did not know how to take it otherwise.

“I think it was just easier overall like I don’t know where to go exactly outside of school. I thought it would be easier to take it in school,” Saeed said.

The driver’s education course, which is split into two main sections, classroom and behind-the-wheel, teaches students both the rules and regulations of the road while still getting the hands-on driving experience. Senior Alexa Flores, who took driver’s ed during her sophomore year, explains how this makes the course similar to a regular class.

“Classroom consists of lessons followed by tests. It is set up like a regular core class where the teacher lectures on the lesson and then, for each unit, the students are assessed. The behind-the-wheel portion is with a partner, and the period is split into two so both of you get to drive for half a period,” Flores said.

Throughout his years of teaching, Olson has noticed that students tend to make similar mistakes when first learning how to drive. While these mistakes can be funny, they also can be quite dangerous.

“The [common mistakes] all revolve around left unprotected turns … The ones I remember the most all the time are all the same: a left, unprotected turn with a semi truck coming at you. A new driver does not see it and starts to turn, [and] we have to grab the wheel and stop them from turning into the semi-truck going 45 miles an hour,” Olson said.

Along with the scary stories, there are a few entertaining ones. Whether it be a student hitting something with the car or simply not using common sense, they all have one thing in common—embarrassment.

“One of the funniest stories was [when] one of my students backed into a mailbox, and he was really nervous and didn’t know what he needed to do. I told him that he had to go up to the house of the mailbox, ring the doorbell and tell him that he knocked over a mailbox. I mean, we didn’t want to damage the property and leave, we had to let them know; so the kids that were in the backseat got a kick out of that while he was walking slowly up to the house,” Bozek said.

“[We] were on the expressway lesson and this is prior to us having the I-Pass, so one person would pay the toll with a dollar bill and the other person coming back would then pay with just the change that was left over into the basket. I always made a point to wait to hand the money to the student until I knew we were securely in the tollbooth. We pulled in, came to our stop. The student looked at me for the money and I handed them the change, they took the change in their right hand and turned to go throw it in the basket and threw the money but never rolled the window down,” Stapleton said.

While the driver’s education course seems like all fun and games, each experience behind the wheel or in the classroom has a significant message that teaches the driver a lesson that sticks with them for the rest of their lives on the road.

“I mean, you see a level of confidence, and you think back to where they began to start the semester. Like I said, what they’re doing now and to see that that growth is really kind of the plus. It’s also a life skill that every teenager wants, and it’s kind of fun to be a part of that,” Stapleton said.