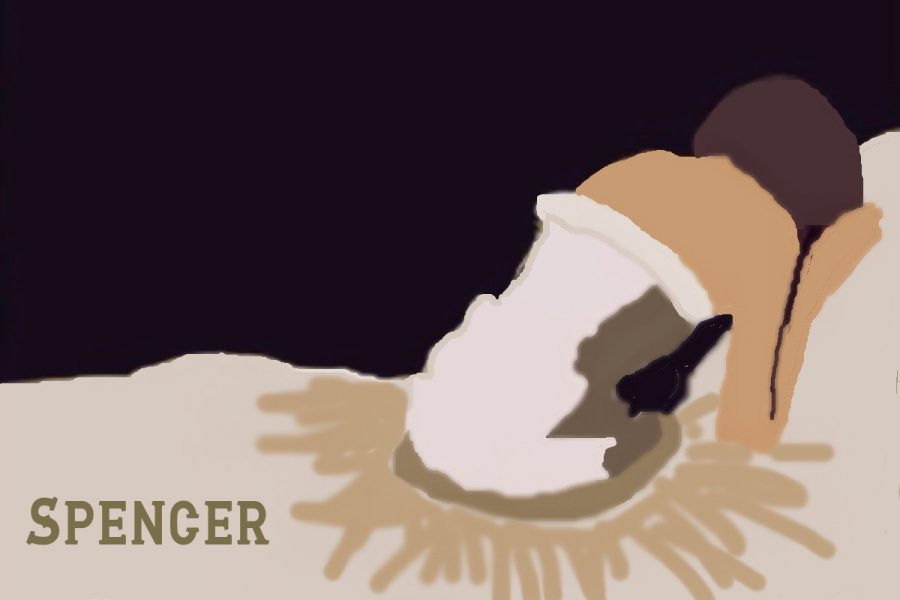 Spencer was released in the U.S on Nov 5 .

The film takes place at the queen’s estate between Christmas Eve and Boxing Day for a traditional holiday, however, tensions begin to rise between Diana and the royal family. The title “Spencer” is derived from the late Princess Diana’s maiden name Spencer, which allows the film to narrow the focus on Diana as an individual. Although “Spencer” isn’t precisely a true story, there is no doubt in my mind that the cruelty and abuse that Diana experienced at the hands of the royal family was any less than what was portrayed in the film.

Actor Kristen Stewart delivered a breathtaking and emotional performance as Diana, not to mention her portraying a posh British accent as an American. “Spencer” itself was a masterpiece, with gorgeous elongated shots filmed as if it were an old black and white film. Even with the lack of dialogue, the soundtrack filled with dramatic orchestral ballads created a captivating viewing experience.

Larrain’s use of contrasting colors to convey emotion is astonishing. He utilizes the colors of the curtains, the carpet, the trees and even Stewart’s outfits to portray Diana’s seclusion. You can feel the suffocation she feels through the white, lifeless, still shots and the muted, hazy mist that clings to her surroundings.

Even in the household, the dusty maroon and dark grey tones covering every surface are highly contrasted with her beautiful, vivid blue dress. Stewart stands out in every shot, perfectly illustrating Diana’s role as an outsider.

The film portrays the importance of tradition and appearance that the royal family lives by religiously. This “tradition” is used as a weapon to control everything Diana does, leaving her with zero control over her own life: down to what outfits she wears, her whereabouts, her weight and what she eats are meticulously planned.

Diana has several whispered conversations on the grounds where she compares herself to an insect as if the royal family is watching her under a microscope.

The royal family transforms the beautiful estate into Diana’s personal prison. They go as far as sewing Diana’s curtains closed, keeping the outside world out and shutting her in. Although this event may not be exactly what happened to Diana, the feeling of entrapment created by the pressure of the royal family is clearly portrayed.

The conditions set by the monarchy take a severe toll on Diana. The second Diana enters the house she is weighed on a scale; the following scene illustrates Diana regurgitating her last meal into a toilet bowl.

Throughout the film, Diana’s bulimia becomes abundantly clear as she starves herself, binges in the estate’s dessert freezer and continuously purges throughout the film. Not to mention her obvious self-harm mentioned and illustrated on the screen.

Diana’s mental deterioration is also illustrated through visions and illusions. Diana begins to see visions of Anne Boleyn, a woman who was beheaded by her husband Henry VIII because he wanted to marry his mistress. Diana culminates a deep connection with Anne Boleyn as her own husband, Prince Charles of Wales, is having an affair.

Diana cries out, as the camera flashes between shots of her and Anne Boleyn. This heartbreaking comparison illustrates the devastating impact the patriarchy, specifically men in power, have on these poor women. An impossible fight for perfection – it is no wonder Diana feels driven to the point of insanity.

The cruelty of Diana’s husband and the cold distance between them is painfully obvious, and the effects it has on her are devastating. Her internal battles between wearing what she desires, versus what she believes fits the male gaze of beauty is something that any woman can relate to. There is also no doubt in my mind that her husband’s actions contributed to her severe eating disorder.

A gruesome vision at the beginning of the film portrays Diana ripping off her pearl necklace, given to her by her husband, and choking it down with her soup. The scene displays her internal torment of hating her husband for what he’s done, yet still fighting to conform to his standards in order to please the public eye. The pearl necklace symbolizes a chain, suffocating her and a constant reminder of her husband’s infidelity.

At the end of the movie, Diana attempts to escape to her childhood home. There are rapid and intense flashbacks depicting Diana as she is running, dancing and clutching her younger self. She is grasping onto her identity that the monarchy is ripping away from her. Diana faces the crippling internal battle between conformity and freedom, resulting in the mourning of her past self.

Although Diana is being mentally and physically ripped to shreds by the royal family, there is one part of her identity that never seems to falter: her role as a mother.

In the dark, isolating, lifeless walls of the estate, Diana manages to give her children, William and Harry, the best childhood imaginable. She plays games with them in the candlelight, brings them presents, and entertains them as best as she can. Diana even puts herself at risk by walking in front of gunfire to prevent them from being forced into hunting for sport.

Diana’s exact actions may not be precise to that of the film, but the essence of who Diana was as a caring mother is accurately portrayed no matter what the true storyline may be.

Although “Spencer” was a tale based on Princess Diana and her experiences, it delivered a message so much deeper than what meets the eye. The film displayed the tireless fight between conformity and freedom and the effects of the patriarchy and social pressures on women, resulting in loss of self and feelings of insanity.

Diana represents not only women in power, but women in the spotlight, women who’ve been deceived and women who’ve been constantly beaten and broken by the patriarchy. On the other side, she also represents the kind, caring mothers who fight back and remain true to themselves no matter what the consequences may be.

I would highly recommend “Spencer” to anyone, especially to women who desire to find a beacon of hope in a world clouded with social and political pressures. I would also recommend it to anyone who feels as if they’ve gone insane from conformity in today’s society, for you are not alone.