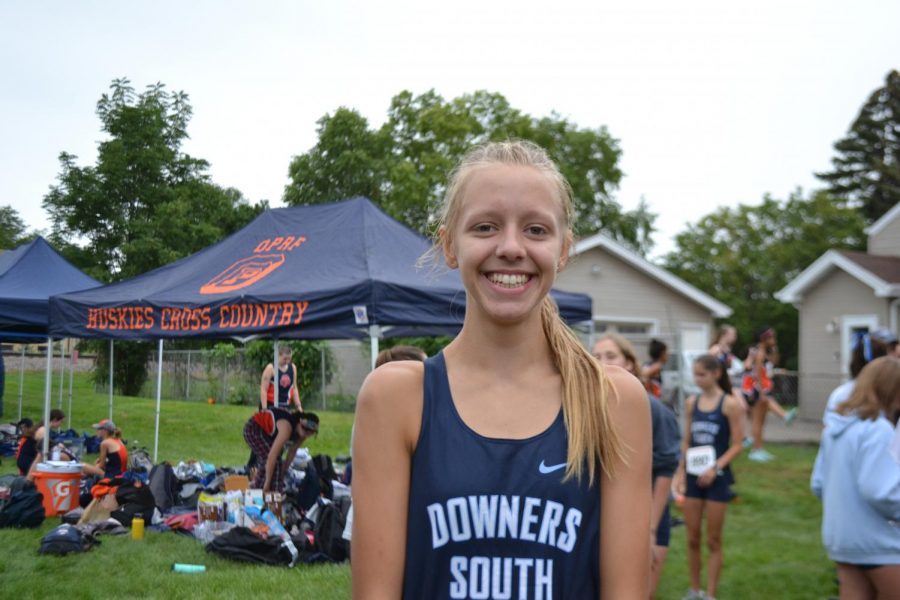 Holly Johnson smiles before her race at the Fenton Cross Country Invitational.

For many high school students, running is not the highlight of their time in high school; for freshman cross country runner Holly Johnson, it’s her passion. Even as a newcomer to the DGS program, Johnson expressed that her love for running is nothing new.

“I’ve always been interested in running ever since I did soccer and softball when I was younger. I knew that running was my strong suit because that’s what all my coaches would say. They would sub me in to run and I just developed a love for it,” Johnson said.

Senior and teammate Alex Spang is neighbors with Johnson and has grown up with her. Spang ran with Johnson before high school and when she entered the DGS program, Spang noticed her improvement.

“I ran with her when she was in eighth grade and just seeing her now, mentally and physically she’s improved a lot and has been working so hard,” Spang said.

“I first met Holly when she was in eighth grade. She was just a natural at running and she could easily keep up with us. That fall, I went to one of her races and she just pulled away from the entire field by like a minute, and won her race despite going the wrong way,” Joy said.

With over half of her freshman cross country season complete, Johnson broke the DGS freshman girls record, running 17:09 at the Naperville North Twilight Invite on Oct 6. This time is also currently the fastest freshman three mile time in Illinois. Johnson expressed that her individual and team goals for the remainder of the season have an emphasis on having fun, not specific times or placements.

“My personal goals are just to improve in running and have fun with it. My goals for my team are to get closer and to have as much fun as we can,”Johnson said.

Douglas Plunkett, the head coach of the DGS Girls Cross Country Team, also has goals for Johnson for the remainder of the season.

“I think Holly can do very well the rest of the season. I want her to stay healthy and keep working hard and get more experience running in bigger races. I think she has a good opportunity to be all-state this year and potentially even a state champion down the road,” Plunkett said.

Aside from her athletic ability, both her coaches and teammates admire Johnson’s positive attitude. Spang noticed Johnson’s kindness to all of her teammates and how her positivity rubs off on everyone around her.

“When she compliments you she’s so genuine about it. She’s just so happy all the time and puts that on other people… she’s always so proud of everyone, no matter what they can do,” Spang said.

Despite her individual progress, Johnson remains focused on the team aspect of cross country. Her peers believe that her positive attitude is reflected in the team dynamic because she always encourages the team to work together. Junior and teammate Skyler Tomecki observed how Johnson takes initiative as a leader on the team despite only being a freshman.

“She adds to the dynamic because she is a natural leader and I don’t think she realizes that. Whether we’re going for a run or before practice, she’ll always be there to help out. She’ll always help us stay motivated,” Tomecki said.

With all of the regular season meets complete, Johnson will compete alongside her teammates in the West Suburban Gold Conference meet hosted at Leyden High School on Oct. 16. Looking ahead after the conference meet, Johnson will run in the Orland Park Regional on Oct. 23 as a member of the state series team.