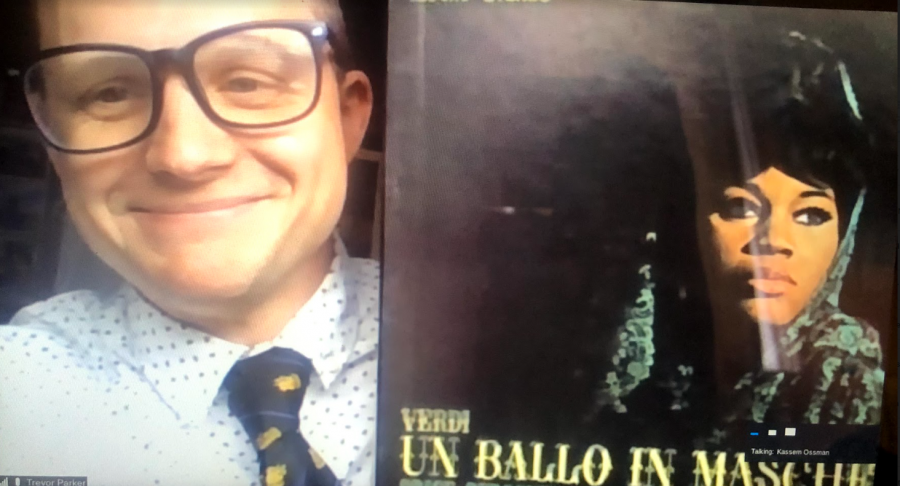 Parker shows one of the many vinyl records that he owns

English teacher Trevor Parker collects all types of vinyl records, from jazz to opera he talks about what inspired him to start collecting as well as some of his favorite records.

Q: When did you start getting into collecting records?
A: “I remember my parents had a modest vinyl collection growing up, we still had a record player in the house and [I] didn’t really listen to it a ton [but] when getting into high school I started listening to their collection and then when I started getting into classical music and studying voice in college then I started picking up more recordings, specifically opera and other classical music that I was interested in. Then I was buying record players and just got really into it, I had a really fortunate situation where one of the principal flute players at The Lyric Opera was friends with my voice teacher and she was connected to a really small college called Cardinal Stritch University in Milwaukee and they were getting rid of all of their vinyl records from their library. [My friend said] ‘hey I have a connection up there, tell [your voice teacher] that you are really into records as well. They are going to throw them all out if people don’t take it’ and so he schlep me along and we brought ten boxes and loaded them all up in this woman’s truck which really spiked my collection”

Q: What is your favorite album that you have collected and why is it your favorite?
A: “Oh that’s tough. I can’t just say one [but] in terms of Jazz it would be Ella Fitzgerald, I have five or six [of her] records and my wife and I both just really love her voice and also a John Coltrane album called ‘A Love Supreme’ which I just bought this year and it seemed appropriate for what we have been going through as a country and it’s a beautiful jazz album. In terms of Opera or Classical I really love variety operas [like] Macbeth and there are a pair of singers that sing the lead roles and every time I listen to it – just very next level”

Q: Where do you usually go to get albums?
A: “I am a frequent eBay buyer, there are obviously loads of stuff you can find there but I have actually found a seller who consistently puts very low prices on recordings of the 50’s and 60’s which is kind of like the golden age of opera. What he does which is very strange but I don’t question it is he will put an opera on there for a dollar but it won’t be just the opera it will be like another recording of the same opera but a different cast but he doesn’t have a box for it so he just puts it all in one box so I will get six vinyl records”

Q: What has been your favorite genre of music to collect?
A: “I would say Opera and Jazz”

Q: Why do you collect vinyl records?
A: “I think there is something [for me] about the holding of the vinyl record, the lifting of the needle, yes you can have 10,000 songs in your pocket on your iPhone and there is a level of ‘you can listen to anything you want’ but if anyone is like me you can get stuck [thinking] ‘what should I listen to then?’ We get into these ruts of always listening to the same thing and so there is something about the physicality of the vinyl where it’s like ‘I’m pulling this one off the shelf and I’m putting it on and I’m flipping the record over’ I love that part of it because it makes me feel here. In a year that’s been very challenging for so many reasons and unstable for a music lover like me it’s been comforting”