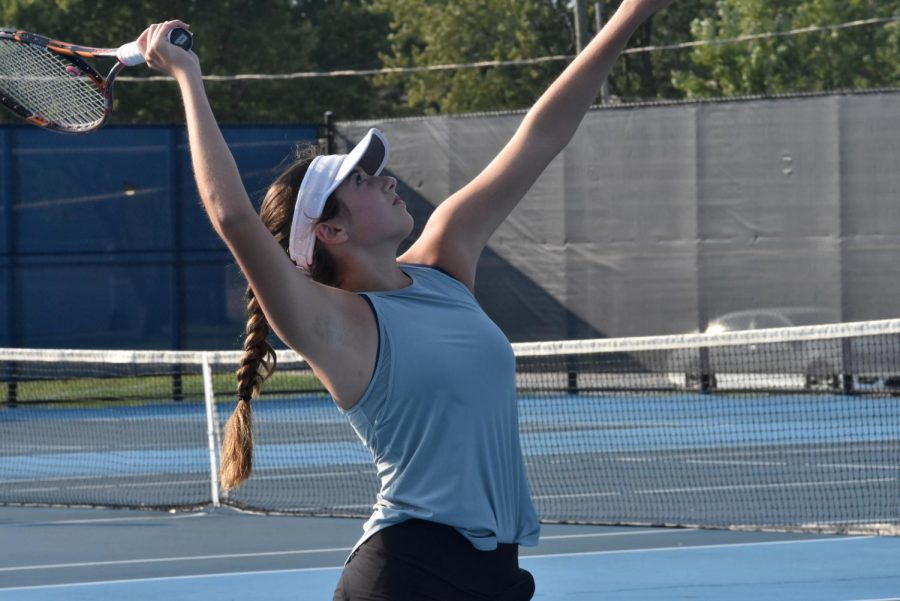 Captain Milia Saei prepares to serve off to her opponent.

Senior and captain of the varsity girls tennis team Milia Saei speaks on her experiences from her last season playing High School tennis. Saei has been involved with the Tennis program since freshman year and was happy to say her last season was a good one.

Even though this was Saei’s first season being a team captain, that didn’t stop her from setting high goals for the team that she felt were achievable.

“At the beginning of the season, the other captains and I created a few goals that we wanted to accomplish for the season. One of them was having a strong team bond, just like our team last year, this was important to us because we had a lot of new girls on the team this year so it was essential that they felt welcomed to the team,” Saei said.

Saei had to play her final season of Tennis through the Covid-19 pandemic and even though her season was an overall success, she still had some hardships to overcome during her season.

“The hardest thing for me this season was being quarantined for two weeks because one of my teammates tested positive for Covid, for those two weeks of being quarantined me and the rest of the team missed out on matches and our season was cut short. Staying positive and having the right mindset is what allowed us to persevere to the end of the season.

Saei reminisces on one of her favorite moments of her final season at DGS.

“Beating Hinsdale south for the first time was the best moment of my senior season, me and my partner had a rough match the day before so coming back the next day and defeating our rivals was very exciting.”

Saei doesn’t have plans to play tennis in college, but that doesn’t mean she’s done with the sport completely

“I don’t have plans on playing tennis in college, I know for sure that I will keep playing it throughout my life, it’s one of my favorite hobbies and a very fun sport to play.