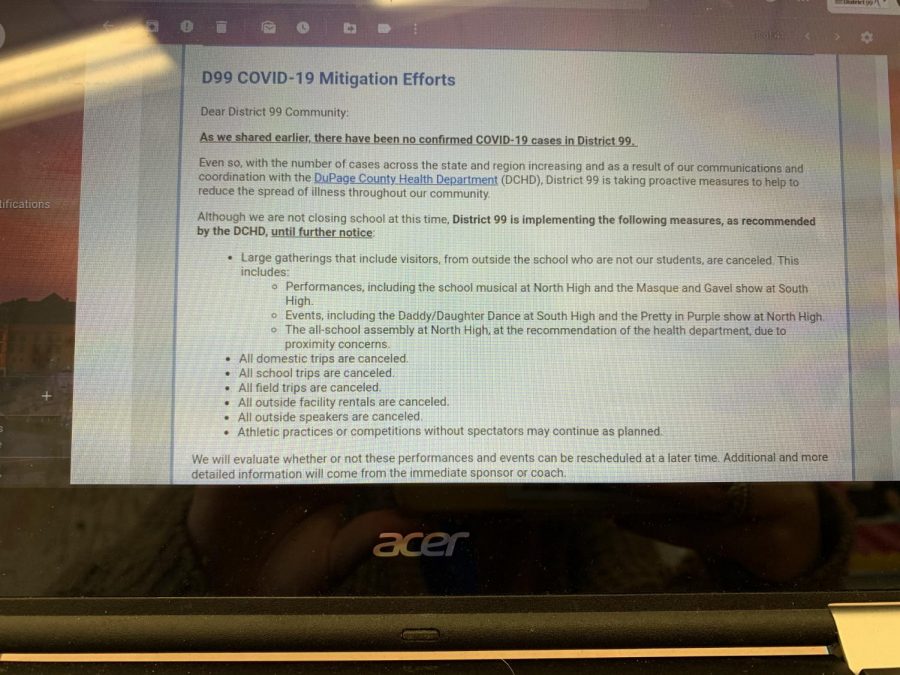 Superintendent Hank Thiele informed staff and students about the cancellation of field trips through an email on Wed. March 12.

On Wednesday, March 12, the varsity baseball team’s spring break trip to California was canceled due to the COVID-19 virus. This cancellation was announced to the entire student body via an email from superintendent Hank Thiele.

In his email, Thiele stated multiple events that are now canceled including school trips, field trips and domestic trips due to the COVID-19 virus. These cancellations are all being done in an effort to help reduce the spread of illness throughout the community. As of right now, there have been no confirmed cases of COVID-19 in District 99.

Head coach Darrell Orel talks about how this cancellation of the spring break trip will affect his team.

“The cancelation of our trip was disappointing but everyone associated with the team realizes that this situation facing the world is much bigger than our trip. The team remains positive and they continue to work hard as we prepare for our opening day, [which is] scheduled March 24 vs. Wheaton North,” Orel said.

“This trip would have helped us be able to get some game situations instead of always pretending a situation in the fieldhouse or outside when it’s cold back in Illinois. Also, it would have given us the ability to see how the team looks like a whole since the weather would have been nice out,” Oskorep said.

“Everybody on the team is really down about [the trip being canceled]. We have been looking forward to it since last season. Not only is it fun to go play baseball in the warm weather but it’s also a great team experience,” Turek

While the team may not be able to travel to their tournament in California, they are still allowed to have practices and games. These practices and games are being held without spectators to also help reduce the risk of spreading illness. Varsity player Jack Blazevich expresses his thoughts regarding playing with no spectators.

“It’s going to be a little different. We feed off the crowd just as in any sport. We’re going to get through it and we’re going to have to feed off of our own energy,” Blazevich said.

With going on a team trip, the team is given the chance to grow closer and build a better bond, on and off the field. The team will not be given that opportunity to build the bond this year due to the COVID-19.

“This trip would have brought some team chemistry between us as a whole team both on and off of the field. We would have been able to hang out and that really helps bring us closer,” Oskorep said.

With their first few games being canceled already, the team is still hoping to get an entire season of baseball in.

“Our ultimate goal is to win the state championship, but we have always said to take it one game at a time. Our goal every day is to get better and win our next game,” Turek said.