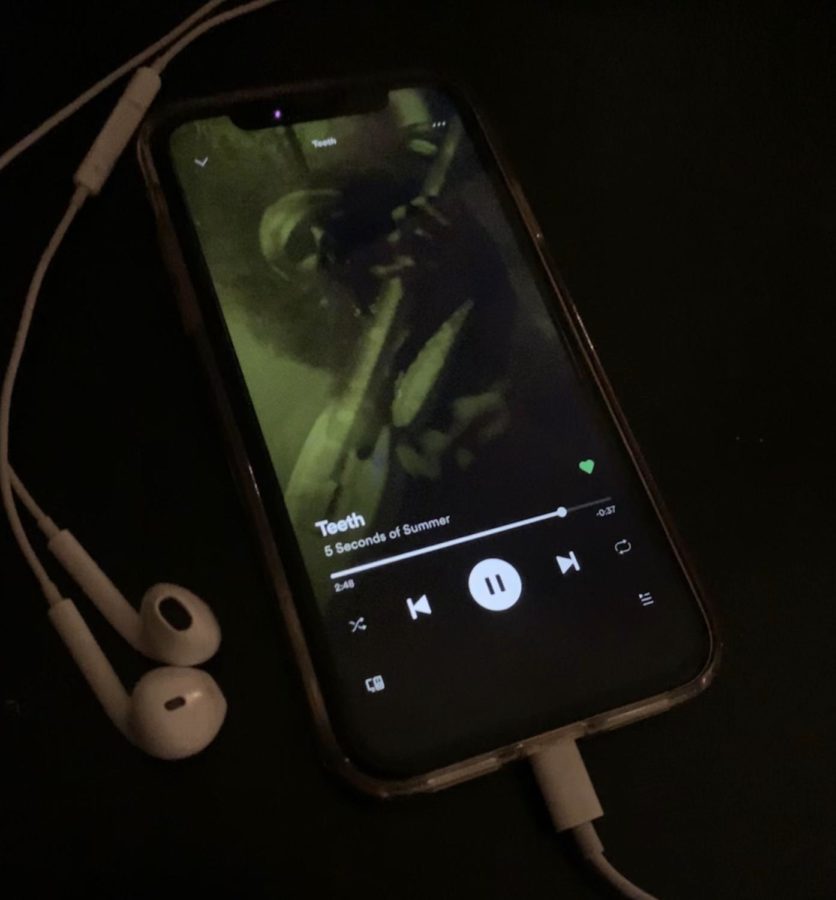 With an eerie vibe from the Spotify video, you’re ready to rock out to “Teeth.”

On Aug. 21, 2019, chart-busting pop-rock band 5 Seconds of Summer released its second single of 2019 called “Teeth.” After waiting countless days for this release, I can tell you I’ve never cried harder over a song. Don’t be fooled by my fangirling, this song was well worth the wait.

Formed in 2011, the young quartet from Sydney, Australia never expected anything more than releasing covers on YouTube. Then, out of the blue, Britsh-boyband One Direction’s Louis Tomlinson, stumbled upon its videos in 2012. Under the eye of one of the world’s most popular boy bands, One Direction invited 5sos on their 2013 “Take Me Home” tour, skyrocketing their careers.

Over the last six years, the band wrote and recorded its debut album “Self-titled” in 2014. This album made every 5sos stan “emo” (myself included). They then released their second heart-wrenching album “Sounds Good Feels Good” in 2015 and last, but certainly not least, “Youngblood” in 2018.

Calling themselves “the biggest band, nobody’s heard of” 5sos topped the charts with all three of their albums for multiple weeks, winning the ARIA Music Awards for Best Song Of The Year (2014, 2018) and Best Group (2018) as well as the People’s Choice Award for Favorite Breakout Artist (2015), just to name a few.

Finally, their latest release “Teeth,” is a rollercoaster of emotions. From wanting to dance around your room with a hairbrush as a microphone, to feeling the need to crawl into your bed and just cry, the song still remains a bop.

Carried throughout the entire song bassist Calum Hood gives a deep, heart-pounding bassline that contrasts flawlessly with the lead guitarist Michael Clifford’s powerful electric guitar. The entirety of the song is sung by the one and only Luke Hemmings, giving a perfect falsetto throughout, especially in the pre-chorus.

Contradicting the softer, high-pitch vocals in the pre-chorus, the chorus shows you the rock gods the members of 5sos truly are. Listening closer, you can hear drumming legend Ashton Irwin with a strong, consistent beat.

Taking a break from the heavy rock sound, the group flows the song into the bridge, which has a lighter sound to it. The lyrics are ones I don’t quite understand yet, but I know it does make me somehow feel broken-hearted about my non-existent relationship.

Faultlessly making every bone in my body shiver from the vocals, the bridge never fails to impress me. Every. Single. Time. The isolated vocals that fill your head are really something else. I mean excuse me, 5sos, heaven wants its vocals back.

At the end of the three minutes and 24 seconds, the song sadly ends. “Teeth” is a masterpiece in its whole, from the lyrics to the instrumental combination. This song has become my personal favorite, and hopefully, it will be yours too. Just don’t become a fangirl like me though, it’s rough.