Facing the impact of an injury head on: Concussions 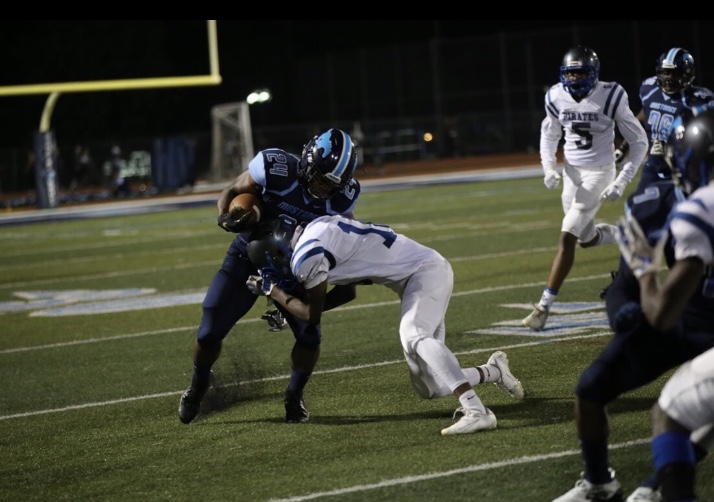 Concussions are the most occurrent in football, making up 75 percent of concussions

Grabbing his head, a student has an agonizing headache. He stands up and feels dizzy, barely remembering what occurred to make him feel this way. A medical professional diagnoses him with a severe concussion, and the student is unprepared for the long road of physical, mental and emotional distress it will cause him.

Concussions happen to be increasingly common within students at DGS. According to brainline.org, it’s estimated that as many as 3.8 million concussions occur in the USA per year during competitive sports and recreational activities; however, as many as 50 percent of the concussions may go unreported. It is also stated that children and teens make up approximately 70 percent of all sports concussions.

These statistics prove to be true as junior Nick Frosolone experienced his first concussion in the seventh grade while playing football.

“I found out I had my concussion after a game when I got home. I was having a really bad headache. I was dizzy, and sick to my stomach. It affected my skills because I stopped playing football for the rest of the season, and when I got back into it, I was really out of shape physically and mentally,” Frosolone said.

Frosolone continued, explaining that he feels children should avoid contact sports in order to be safe: “I personally don’t think little kids should play contact sports. Since they are so young. Everything in their body is more sensitive versus when they are fully grown up,” Frosolone said.

Because of how head-injury prone football can be, football has received a negative reputation. Head football coach Mark Molinari explained how the DGS football program has changed the way they practice over the course of the years.

“There has been a lot of changes as to how we practice … this has been going on for awhile and we’ve definitely seen a major improvement. [For example], we don’t hit on Monday’s at all. On Tuesday’s and Wednesday’s what we do is called thud, which the head is not really a part of. Friday, the game, is the only time we’re going full blown,” Molinari said.

Molinari continues, “We really have eliminated using the head every day except for game day. This year, we’ve only played in five games [so far this season] and we’ve had one concussion — that’s not a lot. It used to be back in the day that there were five, six, maybe 10-20. The numbers are definitely going down,” Molinari said.

And although football is the most concussion-prone sport, there are still plenty of other contact sports that have affected the lives of students. Senior Jordin Grant, a varsity girls basketball player, has also experienced something similar.

“Right after I hit my head I was out of it and it was hard to focus. When I was on the sidelines, one of the trainers told me I had a concussion. [I would] occasionally get headaches and waking up at night [was sometimes a problem],” Grant said.

Athletic trainer Stephanie Smith described the ways they test for concussions in athletes who have had a head injury such as Grant.

“One of the tests we run is called the Impact Test.  We have certain sports take the test their freshman and junior years before their seasons start. We also use the SCAT5 (Sport Concussion Assessment Tool) test if we were to suspect a concussion. This goes through a variety of cognitive, neurological, and symptom screens,” Smith said.

Junior Aidan Krieble is an ice hockey player who dealt with similar symptoms.

“I found out about [my concussion] a few days after the hit … I just felt really fuzzy and couldn’t think straight. Trying to balance life was harder because I couldn’t really focus on any specific task for more than a few minutes, so it made talking to people really hard because I’d constantly forget what they said or I said,” Krieble said.

Smith explained that these symptoms are extremely common in concussed students.

However, senior Hannah Harrison proves that not all high school concussions are due to sports. Harrison dealt with being involved in a car accident, giving her a concussion.

“On my dad‘s birthday, I was on my way to coach a Special Olympics basketball game at LTHS, and I was sitting at a stoplight outside of Hinsdale Central. A car full-speed rear-ended me, and I hit my head on the seat rest. I was not taken away in an ambulance, but I knew I had a headache, so I went to the doctor the next day — automatically they diagnosed me with a severe concussion,” Harrison said.

Concussions not only seem to give off physical symptoms, but may leave students feeling mentally drained as well. Junior Gavin Crowson, a goalie for the DGN boys soccer team, explained his feelings after sitting out from being vaulted into plastic boards on an indoor turf field.

“It affects you mentally — being in a dark room, doing absolutely nothing. It sucked. It felt like prison to an extent,” Crowson said.

Krieble had a particularly hard time concentrating in school but reassures that his teachers were supportive of his difficulties learning.

“Balancing school wasn’t too bad. [The teachers] give you extra time and stuff because it’s really hard to concentrate and stay on task,” Krieble said.

Harrison explained that her concussion was very difficult for her to deal with mentally as well.

“Having a concussion for about four months was one of the worst experiences of my life. After I wasn’t getting migraines every day, it was every other day for only a few times a week and that went on and it’s still going on till this day,” Harrison said.

Smith explained that healing is an important process, and everyone should be cautious of the way they treat their brains.

“You only have one brain for your whole life, so you want to make sure you take care of it.  There has been a lot of research done on concussion over the last 5-10 years that has made everyone aware of how dangerous a concussion can be. If they are managed correctly it gives the brain time to heal and take care of itself,” Smith said.