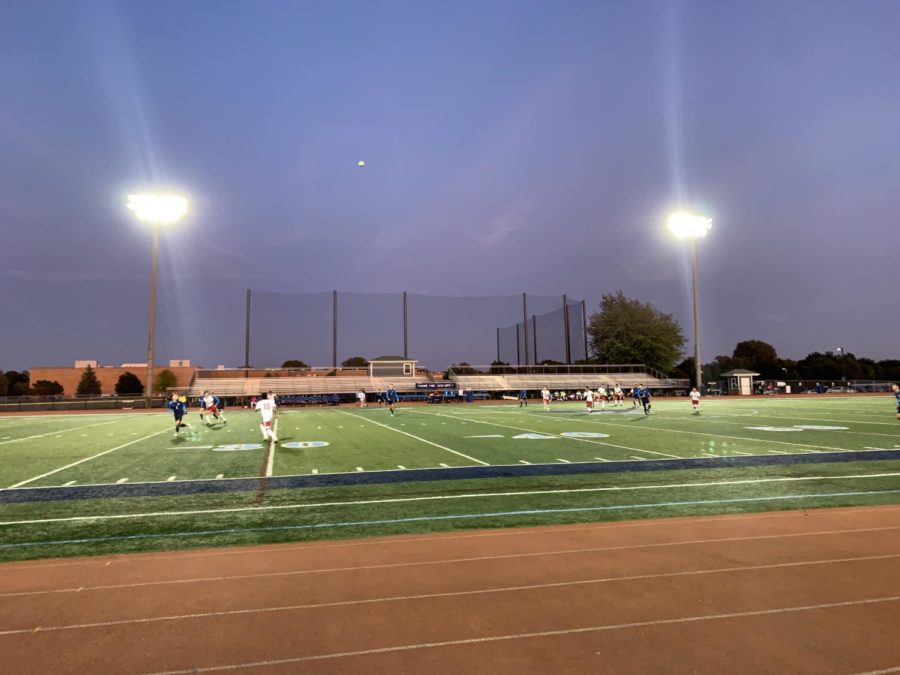 Boys' soccer transfers skills learned on the practice turf onto the stadium turf.

The DGS boys soccer team started the season with an advantage they have never had before: a second turf field.

This is the first year the boys have had access to an additional field. The completion of it occurred just in time for the start of the 2019-2020 school year. The boys soccer team is one of many programs benefiting from one of the first accomplishments of the school’s referendum.

The second field has given the soccer players a new practice facility. Head soccer coach Nathan Terry shared that this is very different from past years.

“My first few years here we just had grass fields and the stadium. Our practices were always on the 63rd grass street fields. … [When we only had one field,] we had to work out a schedule, and most days we were able to get out on the turf, and then there would be some days would we would have to go back to the grass,” Terry said.

Having to constantly switch between turf and grass affected the way the boys practiced.  With the use of the new turf field, boys soccer is always practicing on turf unless they choose not to. Junior Kyle Fenner shared that this addition has made practices more successful.

“It’s easier to play soccer on turf. We practice better, and everyone enjoys the new turf. Last year we always switched where we would practice. It wasn’t consistent. Now it’s like we know where we’re going for practice, so it just feels better knowing what you’re doing every day,” Fenner said.

Being able to practice on turf fields better prepares the team for games. Almost every game that they play is on a turf field. The new field allows the athletes to consistently practice in a similar domain.

“Most of the teams we play are also on turf. This makes the conditions we train in match-like, which again translates really really well,” Terry said.

This new field gives the team space to use without having to compete with other sports. The field in the stadium is predominantly used by the football program during the fall season. Junior Jony Flores shares that having a field available for the soccer team makes using the turf much easier.

“The turf benefits us because we can practice on turf and not have to share the stadium with the football team,” Flores said.

The new turf is also valuable to the soccer program because of its width.  The new field is 75 yards wide, which is much wider than the field in the stadium.  This is the width of a professional soccer field which allows the team to practice differently than on a football-sized field.

“It allows us to really spread some teams out and do some different things tactically that just playing on a football field that is turf wouldn’t allow us to do. As nice as our football stadium is, it is not 75 yards wide. We use as much width as we possibly can out there,” Terry said.

The turf field is a facility that will be utilized by many programs throughout DGS. Boys soccer is only the first to reap the benefits of the new addition.