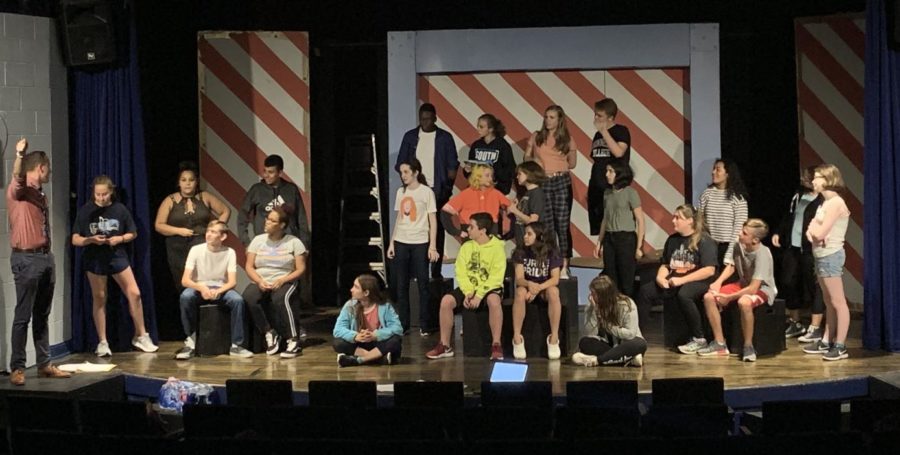 The freshmen are practicing their performance for Thursday and Friday.

On Thursday, Sept. 12, The Freshman Play will be held at 7 p.m. in the little theater. Admissions are free for DGS students, $5 for non-DGS students as well as senior citizens and $10 for adults.

The play consists of multiple short scenes performed by the freshmen that are all based upon the show “The Great British Baking Show.” It will be performed Friday during the school day for freshman classes.

The practices leading up to the play have been different than previous years according to junior Kyra Cain, a student director in the play.

“In past years, we definitely had more time to prepare, but this year, the freshmen have had to work really hard to get all of it down and in a shorter amount of time. It’s proven to be pretty successful so far though,” Cain said.

At the second to last practice for the play, freshmen Megan Fox  comments on the practices as she prepares for her first DGS performance.

“It can be a little stressful at times, but I think the end result will be really really good. We put a lot of time and energy into the show so I think we’ll do really good,” Fox said.

The practices weren’t the only change in the show this year. Junior Alaina Vergara, a student director, expresses her opinion on the limited amount of student directors allowed to help with this year’s production.

“Personally, I feel like the smaller number of people involved has made us all feel more invested in the kids in the cast as well as making it a bit less overwhelming for the freshman, especially for those who haven’t had much prior experience with the theater,” Vergara said.

Freshman, Mckensi Bittig shares how participating in the play has been a good way for her to make new friends.

“It [Being in the play] creates a non judgmental family and it’s  a group of friends. You can go to classes and you have friends there to talk to. It’s a good way to get involved,” Bittig said.

English teacher Justin Matkovich, the director of the play, also talks about how being involved in the play is good for the freshmen.

“This [being in the freshmen play] is a great way to introduce students to acting concepts as well.  The show allows over 20 freshmen to be involved. Not having to compete with upperclassman gives them more opportunities to be involved at South,” Matkovich said.