DGS baseball on a roll 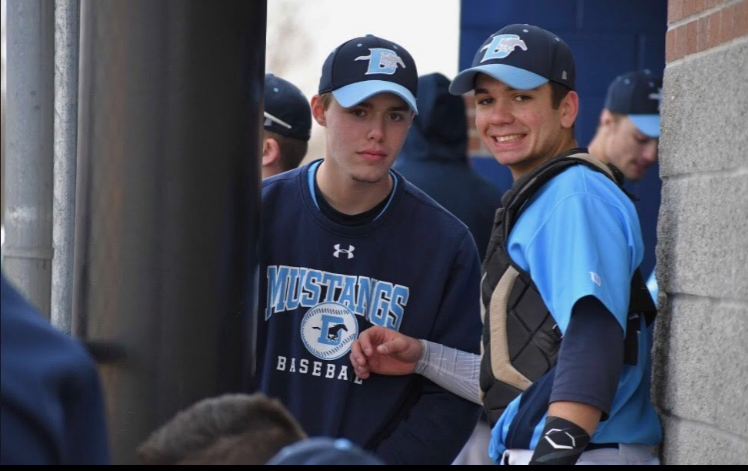 The varsity boys’ baseball team has been doing well lately, winning their last five games, and they are on track to finish the season strong.

In the game against Leyden, Stacey pitched four innings with seven strikeouts and no walks. The Mustangs had an early start, scoring 14 runs in the first four innings of a five-inning game. This was the start of the Mustangs’ offensive barrage on other teams.

In the game against Proviso there were hits all around and three different pitchers for the Mustangs. Gino Cozzi, Jake Wissler and John Kohlmeyer held the Pirates to no runs to secure the victory.

The Mustangs scored in every inning of this six-inning game to take the game from the Willowbrook Warriors, 18-7. Multiple pitchers for the Mustangs did not completely control the Warriors, but the Mustang’s offense was able to make up for it, scoring 18 runs.

The Mustangs beat Leyden in six this last Tuesday due to a 14-3 score and slaughter rule. Nick Stacey had a big five RBI day and hit three for five with two doubles. “Stacey and [Andrew] Alfini hit the ball hard in the game, and even though the pitching gave us ten free bases I am happy with what we did offensively,” Head Coach Darren Orel said.

Andrew Alfini started for the Mustangs and pitched for the first three innings letting up two runs with two strikeouts.  Cozzi also struck out two in two innings. Overall the Mustangs’ pitching kept the Eagles to three runs and sealed the deal.

DGS fell to Leyden, 4-3. In the bottom of the sixth inning, the Mustangs had the bases loaded and no outs when Brett Riegler hit a rocket right at the pitcher triggering a double play and ending the rally. This was only one of the many missed opportunities the Mustangs could have capitalized on to give themselves the upper hand. ”The sixth inning was a missed opportunity but we had a lot of chances in the three innings before the sixth, and we should have scored there too,” Orel said.

The pitching for the Mustangs got the job done with Cameron Crowley starting and Michael Hoes closing. Crowley struck out three and gave up no walks and Hoes pitched the seventh to hold the Eagles to four runs.

Many errors in the game made it almost impossible for the Mustangs to keep the Wolves offense under control. The Wolves scored five runs in the second inning to put them on top of the Mustangs early.