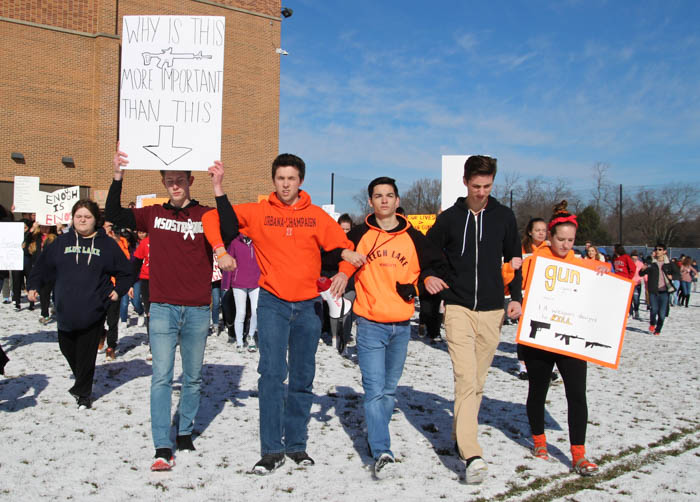 At 10 a.m. on Wednesday, March 14, the hallways of DGS filled with 622 students leaving their third period classes to fight for stricter gun laws and remember the 17 students killed in Parkland, Florida one month ago.

At the conclusion of the walkout, the 622 participants returned through the athletic entrance and were met with a wall of four swipe stations, operated by deans and faculty members.

One by one, students were printed swipe tickets, each assigned a detention per school policy.

Freshmen Derek Hoffman and Jessica Hedberg received their first detentions because of the protest.

“I’m happy with my detention. At first I was a little nervous but now, I’m proud of it. I’ll go, I’ll be happy about it. I’ll smile the whole time and make the best of it,” Hoffman said.

“It’s definitely worth the consequences, someone’s life versus a detention? You don’t even have to think about it,” Hedberg said.

Later that afternoon, Associate Principal Karen Taylor made an announcement that students will be able to fulfill their detention requirement by attending a forum on school safety. The discussion will take place on Monday, March 19 from 8-9 a.m.

“DGS students and administrators will meet to discuss what we can do to make our school a safe place for everyone. If you choose to join us and are present for the entire discussion, you will recieve credit for one hour of detention,” Taylor said in an email to students.

Most students reported their classrooms half-empty with some students choosing to continue their typical day in their third period classes. Others joined in the nation-wide protest. Senior Alexis Fuller was among the group.

“I walked out because the last few years especially, we have done nothing about gun violence, and it’s happening over and over again. This is finally a chance for us to take a stand and do what’s right,” Fuller said.

Other students, like senior Jimmy Hennelly, chose to walk out in respect of the Parkland victims.

“I walked out to support the 17 families who have lost their child,” Hennelly said.

Other students saw the event through a different perspective. Senior Brett Reigler felt that he wasn’t in a position to walk out, as he didn’t strongly believe in the reason for protest.

“I don’t think walking out will help change gun laws. When you turn 18, you vote for it. That’s the best way to change it,” Reigler said.

Senior Sydney Antiporek believes there is an importance for standing up for what you believe in but did not know if DGS was the right setting.

“There’s different ways to use your voice rather than interrupting the school day,” Antiporek said.

The turnout was surprising for many, especially for senior student organizer Max Schmidt-Bailey who was amazed by the amount of participants, as the online sign-up held around 300 names.

Schmidt-Bailey and his fellow student leaders planned to comply with the guideline of the nation-wide walkout and stay out of class for 17 minutes. For most students, this wasn’t the case.

Sophomore Peter Burrows expressed that he was proud to walkout in remembrance of the victims but didn’t realize the 17 minute protest would take up the majority of his third period class.

“I pretty much missed my entire third period minus 5-10 minutes. The swipe stations were taking forever,” Burrows said.

Principal Edward Schwartz believes that even with the additional class time missed for some students, the swipe stations were still effective.

“Even though it took 20-25 minutes, I believe that the swipe stations were the best tool available to account for students. Without knowing exactly how many students would participate, there was no way to accurately predict how long scanning everyone into the building would take,” Schwartz said.